Doing the hike to Preikestolen (Pulpit Rock) was on our “to-do list”during our two-month camper adventure in Norway. But we didn’t expect that it would be sooner than we expected…at least  a few days earlier. After Valle, we planned to go hike the Mt. Kjerag and see the famous big boulder of rock trapped between two massive edges of mountains. But because of unexpected twists of events, this did not push through. Here’s what happenned:

We left the small village of Valle and after 30 minutes, drove to Lysevegen. This road, which leads to Lysebotn, passes thru high mountains and have spectacular views of the areas with high-rising mountain tops and lakes which were then still partly covered with ice. After an hour drive thru long, narrow and winding road with lots of snow on both sides, we finally had a very long 2-hour stop at Hahelleren. The view here was amazing, the weather was nice and it was warm – reasons  why we had that long break.

Having a long break at Hahelleren 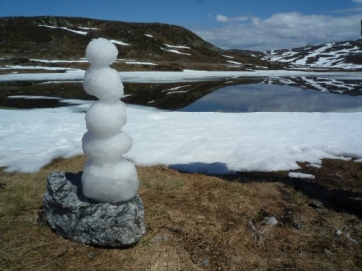 Continuing our trip, we just continued the snow road, going higher and higher , that I really didn’t have the slightest idea how high, until we finally reached the parking for the starting point for the Mt. Kyerag hike. Because it was already 4 pm (too late to begin the hike) and it was not allowed to stay the night in the parking, we drove down to the village of Lysebotn, planning to drive up the next day. It was a very bad decision! The last 7 km on the way to Lysebotn was terrifying! It consisted of 27 hairspin curves on narrow long and winding road, that you have to really slow down and sometimes stop when you’re about to come across another vehicle. And when you thought it was over, there is a grand final of entering a 1.3 km- long one way, badly-lighted tunnel without stoplight on both ends. It was just testing and driving very very cautiously, praying that there’s no vehicle on the other side. And if there is, you just have to go drive to the nearest escape area in the tunnel. The passage thru this tunnel seemed like forever, when finally we reached the other side. From there it was a few minutes drive to Lysebotn. We stayed the night at the parking area a bit further than the ferry harbour, opposite a base club.

Enjoying the view at Lysevegen

Because of the terrifying drive we had on going down to Lysebotn, we decided to blast off our plan to hike Mt. Kyerag. We didn’t want to drive up there again. The only way to get out of the village is by taking a the Fjord1 ferry. We had to pay a staggering price of 975 NOK or 120 euros for the transfer from Lysebotn to Forsand! More expensive than the transfer from Denmark to Norway. But we chose this alternative. In the end, we could see it also as a holiday cruise for 2.5 hour along the Lysefjord.

The ferry arrives in Lysebotn

The village of Lysebotn, taken from the departing ferry…

So at 12.00 the following day, we boarded the Fjord1 ferry and embarked on a 2.5 hours cruise along the 40-km long Lysefjord. During the ferry ride, we had the most amazing views of the mountains. Some parts were thickly vegetated, others not. There were lots of waterfalls cascading down the fjord, some are high, others are just low. Nevertheless, they were both fascinating. We have seen the Mt. Kjerag with a famous rock in between, though it was difficult to see because of the sun. Then there were also the views of the Preikestolen or the Pulpit Rock. We could see that there were many persons on top of it. We passed on some of the most spectacular cliffs and rock formations! I happened also to catch a glimpse of some sea hounds but they were again under water before I could click my camera! We passed some nice charming houses along the banks of the fjord. The scenery was simply breath taking!  When the cruise was finished, we had a very quick lunch break of pea soup and drove to Preikestolen.

Amazing view during our fjord cruise

Located 604 m over the Lysefjord, the Preikestolen or Pulpit Rock is one of the most famous natural attractions in Norway. The mountain plateau at the top which measures about 25 x 25 m was most likely formed by successive periods of frost 10,000 years ago. The hike to Preikestolen is 8-km back and forth, which is doable in 4 hours. Hans and I parked the camper in the designated parking and paid 100 NOK. 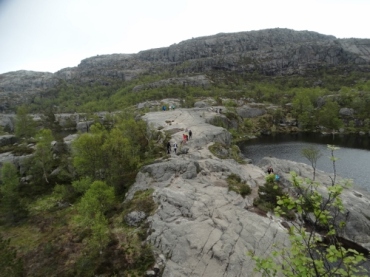 View of the part of the hiking trail

It was 15.30 when we started the hike and it was a little after 20.00 when we were back in the camper. There is a small pad from the parking which follows the way to Preikestolen. The begin was easy, crossing the main road and going a bit high. It was a fast 250 meter ascend from the other parking area. A little further was the jump off point for Zipliners. In the beginning was the footpath mostly consisted of stony paths and portruding old roots of trees. After a good 1 km walk, we came to a long wooden path, about 200 meters long. We had this sort path three times.

A good 1700 meters, the path became steep, and there were steps made from big stones piled together to get to the next level. It got steeper and steeper. We had to be careful not to slip or catch our feet between stones or not to slide. Added hindrance was the many fellow hikers who were on the way down, so sometimes we had to be on the side to let them pass. About 1.5 km before the end, we came across a kind of bridge attached to the wall of the massive cliff and there was a railing to hold on to for protection. From there, and it is by the way thru the entire hike, it was up and down the stony paths. During the hike we were rewarded with magnificent views of the area, the lakes in the mountains and some really nice wide clearings in the middle. There were no proper resting areas; you just have to get off a few meters from the path and sit on on of the bog rocks there. The trail is very easy to do, just follow the red-painted letter along the way and there are visible signposts about every 200 meters. At 200 meter distance, we already had a view of the Rock.

You can’t be too careful…

Walking down the stony path

And finally, after 2.5 hour hike, we reached the Preikestoelen. WOW! AMAZING! What a work of nature! What magnificent views we had from this point.  It was a bit busy on the plateau, many capturing their experiences on the camera; others trying to be daring to sit on the edges. Hans and I also took our pictures, avoiding to be near the edges! But at one point, I did dare to sit on the edge! But very carefully! After absorving the beauty before us and taking the necessary pictures, we hiked a bit further and higher.  From the next higher grounds, we had a better and more magnificent view of the Preikestolen and the Lysefjord. We could see the plateau, its grandeur and depth and all the people wo were walking on it at that time. What a sight to behold. 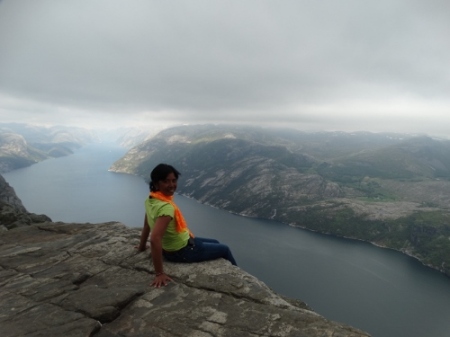 Doing something a little dangerous… 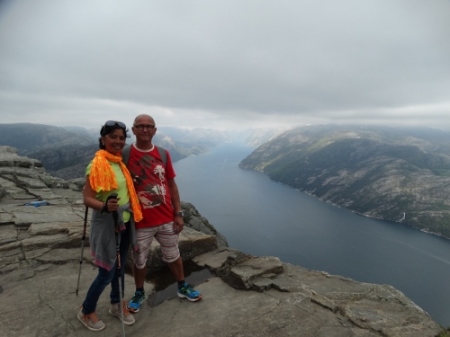 After spending more than half hour on top, we began our hike down.it  It was easier this time and also uneventful. Suprising was at 7 pm, there were still people who were hiking. Some were planning to camp there for the night also. After 1.5 hour, we were back to where we started, at the parking. Our adventure at Preikestolen is over! 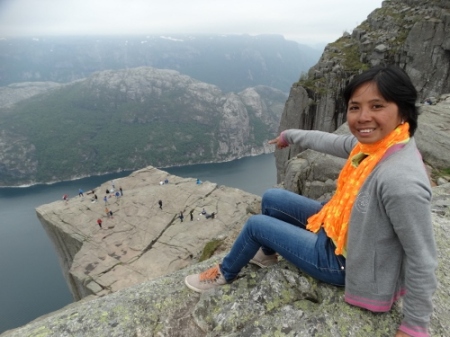 View of the Preikestolen from a higher ground

The amazing Preikestolen and the Lysefjord

The hike to Preikestolen is from average to difficult one. It is for everyone, young and old alike. One must have a very good pair of hiking shoes. And having a hiking stick or staff is big help, as what we have experienced. It helped us from finding and maintaining our balance on hiking. Also a good supply of liquids. Luckily it was not so warm when we did the hike, so we only consumed about a liter of drinks. And bring something to munch on the way. There were no toilets, you just have to answer nature’s call in the nature. Experience the hike. Experience the Preikestolen! We did !