Ä thing of beauty is a joy forever. Its loveliness increases;  it will never pass into nothingness.”

Cacela Velha is a joy forever!

The village of cacela Velha, seen from the other side of the beach

Perched on top of a hill with majestic views to the lagoons of the Ria Formosa, this tiny fishermen’s village with at most 20 small whitewashed houses, is the oldest part of Vila Real de Santo Antonio in the Algarve. Apart from a couple of restaurants, there are no other touristic facilities in the village. There is a charming old church at the main square and an old fort which now serves as maritime police station. The village is so tiny you can walk around it in less than 10 minutes. 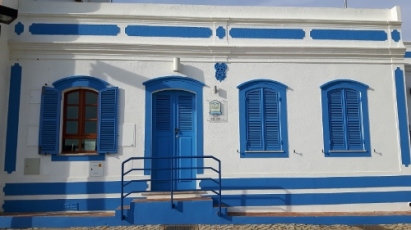 The views behind the church  is like a living painting that changes the whole day. With its serene environment and idyllic setting, it is a great wonder that the village is luckily not yet spoilt by tourism.  And I fervently hope that it wouldn’t!  The village should be left to what it is now – unadulterated, simple, nostalgic and mysterious! There are lots of day tourists who come during the day, but they are only after the views. After taking some pictures, they are gone again. It’s like admiring at a beautiful three-layered chocolate cake, but not actually tasting it! 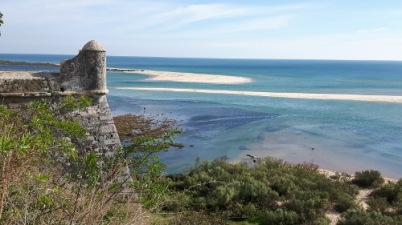 The best views of Cacela Velha, seen from behind the church

What makes Cacela Velha even more special is its Beach – the Praia Cacela Velha , also known as Praia Fabrica.  The beach is truly magnificent! This almost 2 kilometer long sandy beach which  is a part of Ria Formosa National Park, is truly one of the most beautiful beaches we have been to in the Algarve. It is a place where we  have lost our hearts to; a place  where we always will be coming back. And we did come back twice after visiting Castro Marim and Vila Real de Santo Antonio. 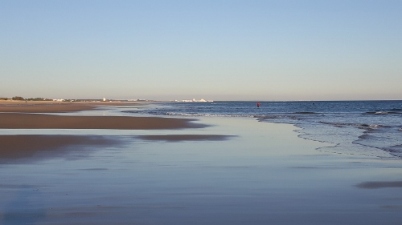 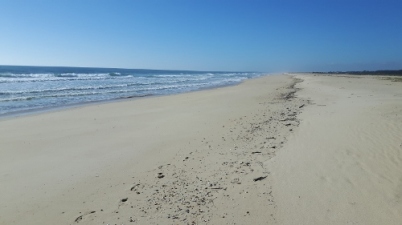 Access to the beach is by boat (via Fabrica) or by foot during low tide. Boats departs from Fabrica in the summer, but otherwise, the only way is to cross the river on low tides.  Hans and I crossed the river  at most 4 times, the first time being the most difficult as we were just starting to find our way.  But after  the first time, we have learned to check the tides first and search for the best place to cross. From the parking area, you just have to walk straight on to the village, keeping on the right side. There you’ll find a steep concrete steps that lead to the water.  Just a little left of the oyster beds is a good crossing point. You just have to look good in the water as there are some deep parts. Then it is just walking straight ahead until you get to the beach! 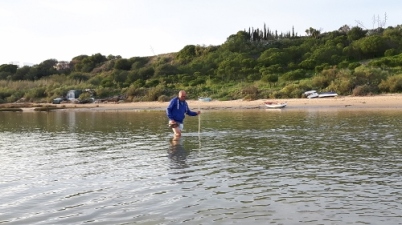 Crossing the river to get to the beach

The first time that we crossed the river was the first day that we arrived in the village. We walked all the way to Fabrica (about 1.5 kilometer) and there found out that there was no boat. We were informed we could go by foot but then we had about 3 hours left and the water would be deep again. That was a difficult crossing point as we had to cross three times. But we were rewarded when we at last reached the beach! We had the best rewards fro our efforts. Except for some men trying to harvest some conquilhas (a kind of seashell), the long beach was deserted. It was heavenly! 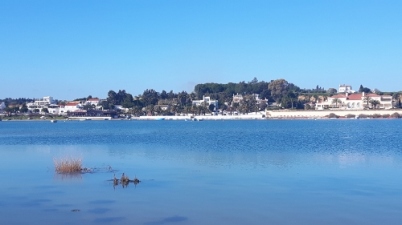 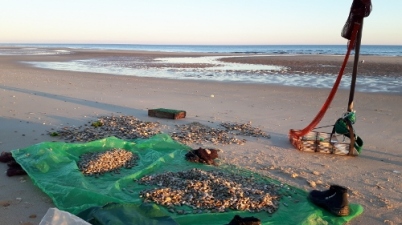 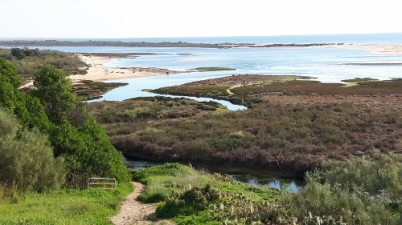 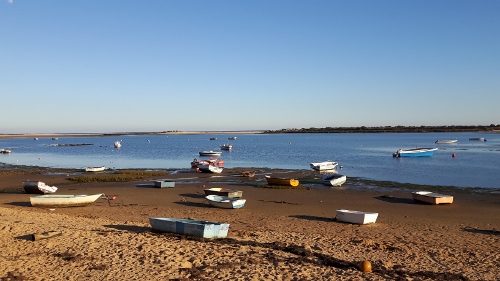 The beautiful nature in Cacela Velha

We had so much pleasure walking barefoot in the sand and in the water, and also collecting shells. We didn’t stay long however, as it was already getting dark. The sun was setting and we still had to look for a good path in going back to the village. Luckily, we didn’t have to walk back to Fabrica. It was then that we discovered a better crossing point, and that is next to the oyster beds.

The next day, we couldn’t get enough of the beach which by now has captured our hearts. So after cycling down to the next village of Manta Rota, we decided to wait for the low tide and went back again to the beach. This time, we had walking sticks with us so we could first test the depth of the waters. Yes, we were getting wiser everytime:)  The crossing was now an easy task. And this time, we had the beach literally for ourselves! Not a single soul was in sight! Heavenly!  It was just Hans and Dines  alone in the world. We enjoyed almost 2 hours of solitude here,, walking side by side, with our hands clasped with each other and sharing the same precious moments we were experiencing at that moment. And to top it all, we saw one of the best sunsets we had in Algarve, just right here in Cacela Velha! 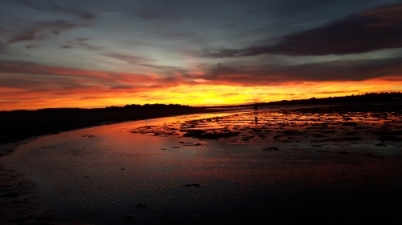 On the third day, it was January 11, and it was our 14th wedding anniversary. We drove down to Castro Marim for a little sightseeing. But when you’ve just come from a perfect place, the next place would suffer as you tend to compare it with the place you’ve just left. And that was what happened in Castro Marim. We couldn’t find any charm in the place! We kept talking about how beautiful it was in Cacela Velha. So after having a quick stroll around town, walking as far as the castle and availing ourselves of the services for motorhomes, we drove back to Cacela Velha. It as already late to go down to the beach so we just sat at the bench behind the church and peacefully watched a beautiful sunset.

The following day, we had a post celebration of our  14th wedding anniversary. We spent the whole day on the beach. We crossed at around 10 in the morning and came back at about 17.30 in the afternoon, when it was ok to cross back. We had our small tent with which we set up in just 5 minutes. We had complete provisions – from coffee to lunchpacket. We even brought beach badminton set with and played for a while on the beach. I had a book which I never had the chance to open when we were on the beach ! We collected lots of seashells, much to my delight! The beach was totally deserted! We even swam naked, imagine that! Nobody could cross and see us as it was high tide during the day! It was pure enjoyment! It was a perfect day for us – the best celebration we had so far! 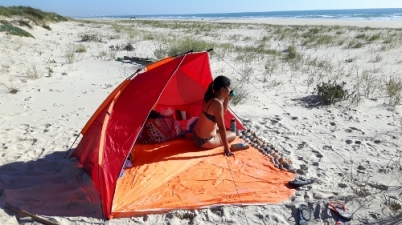 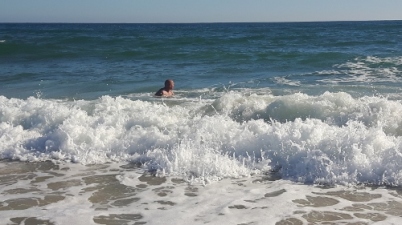 Relaxing day at the beach

As I have mentioned earlier, Cacela Velha is a place where we would always be coming back. On January 13, Friday, we drove further to Monte Gordo, spent one day there and then went to Vila Real. We were so close to Spain which was our next destination. Yet, we couldn’t let go of Cacela. After checking the weather forecast and saw that weather was favourable for at least a day on the beach, we did come back to Cacela. It was January 16, Monday afternoon when we came back. The next day, Tuesday, we spent another wonderful day on the beach. However, it was a rather busy day as we didn’t have the beach to ourselves this time around. As it was low tide, a handful of tourists have also crossed the river and walked on the beach. Still, we picked a quiet spot where we set up our tent, and afterwards did the same things we did during our last beach visit. It was an enjoyable day, we crossed back earlier, at around 4 pm when the water started to get high. We had ample time left, which we used to watch the lovely sunset, as a way of saying goodbye to this wonderful place called Cacela Velha. 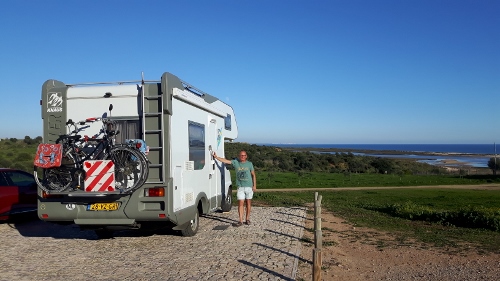 Spacious parking area located before the village, with views of the Ria Formosa lagoons. Toilet is at the village, behind the church where water is also available.

Our customary picures together