Finally, we have arrived in El Rocio! We’ve been meaning to come here for 3 years already, but as fate would have it, it never happened….until this time!

It was a cold day (with a temperature of about 14 degrees C) when we arrived at El Rocio. After having found a good spot to park, Hans and I had our coffee first and then we went straight to the village center for some explorations.

El Rocio, a small village in Almonte situated right at the heart of Doñana National Park, is home to the Virgin of El Rocio, the Queen of the Marshes, also known as the Mother of the Almontenes. Every year, at White Sunday ( 50 days after Pentecost), at least 1 million pilgrims who are members of different brotherhoods, gather at the village infront of the Sanctuary to honor the Virgin. It is a time for devotion, prayers and also festivities!

The Sanctuary, which stands in the middle of the village, housed the image of  Nuestra Senora del Rocio, dressed magnificently  as a great lady of the court.  The building is strikingly white in color, with a remarkable huge door. Hans and I visited this holy Sanctuary, and just like the rest, said also our little prayers. There were boards saying that picture taking and filming are not allowed, but since everybody was doing it, I did also the same!

Another special characteristic which makes El Rocio different from other villages in Spain are the sandy streets it has. Yes, the only concrete road is the main road; the rest in the village is sand! It is remarkable how they have preserved it that way! The lines of houses, which are mainly from the different brotherhoods, are small, and all have a wooden post in which to tie their horses! Even the establishments around the village have special places for the horses. Yes, El Rocio is in a way, a wild west village in Andalucia; even though we could omit the word “wild” because there is nothing wild about the village. On the contrary, it is here very peaceful! 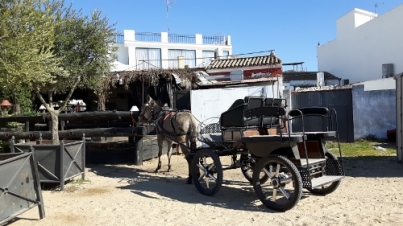 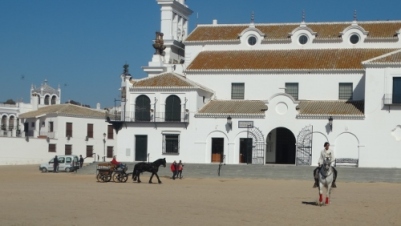 The sandy streets are almost always abandoned; once in a while, a lone horse rider passes by, or some cars, which leave tons of dust after them. The many houses are empty; they become full only during the festivities. The only lively place is at the main square, infront of the Sanctuary, where a couple of cafes and souvenir shops which sell mostly products made of leather, are found. Behind the Sanctuary, more souvenir shops are lined up with more leather products, flamenco dresses and ceramic products for sale.

After moving around in El Rocio, collecting dusts in our shoes and clothes, Hans and I strolled along Paseo Marismeno, located on the shores of the Donana marshes, just infront of the Sanctuary. We had a great time watching the flamingos on the marshes and some other bird species. On the street next to it were a couple of persons doing training for horseback riding. These were all delightful sights which made our stay in the village worthwhile.

We have seen El Rocio in an ordinary day. How we wish we could also see it during the great pilgrimage week and experience the fervour, devotion and festivities that come along with it. I bet it would be a totally different experience! 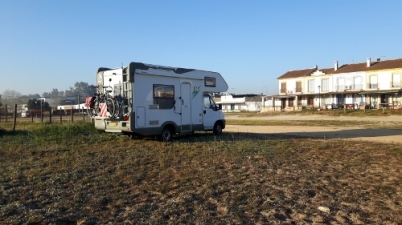 It is an spacious open terrain just about 200 meters from the village center. Water is available at a nearby faucet. There is an official parking near the village center infront of the Sanctuary which costs 1 euro per day.