A little piece of Paradise in the Algarve – that is how we pictured Ilha de Culatra when we saw it! Away from the bustling city life, the island is a place of solitude; it is a perfect place to escape the noise, stress and business in the mainland. Just an half hour ferry ride away, yet, the island seems to be thousand of miles away!

Ilha de Culatra, which is part of Ria Formosa Natural Park, is a 6-kilometer long sandbar island located south of Olhao. The only way to reach this tiny island is by taking a ferry boat which departs at designated times from the eastern end of Olhao waterfront. Travel time takes about 30 minutes and it costs only 3.70 for a return ticket.

We first heard about the island from Capt. Steve, who does boat tours on the island. He showed us pictures about Culatra. We became curious and interested. But because boat tour was too expensive (20 euro per person for 3 hours), we looked for a cheaper alternative. We found it by just boarding the ferry to the island! Cheaper and longer time too!

THE ISLAND OF CULATRA

The following morning, Hans and I were among the handful of tourists who took the 11.00 ferry to the island. We (tourists) sat at the upper deck so we could take in the beautiful views before us, while the locals, with their grocery bags, just contented themselves on seating at the lower deck, as taking the boat to and from the island was just a normal occurrence for them. It was an enjoyable trip; we passed some lagunes and shellfish farms; fishing boats and water taxis overtook us, as the ferry avoided the shallow parts of the river. We arrived at a small jetty on Culatra island and most of the tourists headed directly to the village and on to the beach. 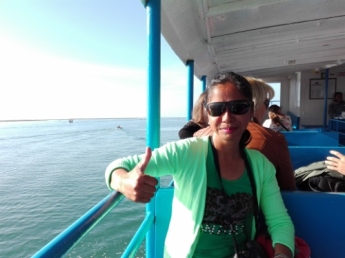 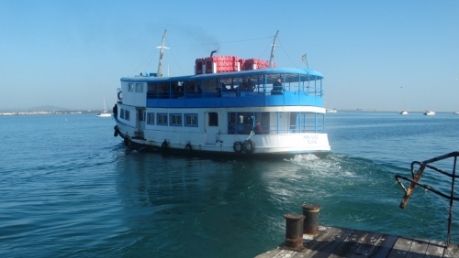 On our way to Culatra

Hans and I lingered at least an hour at the fishing port, where our attentions were caught by the rare animal species we saw in the water. To our great delight, we saw a lot of water creatures on the shore by the fishing port. There were big starfishes, sea anemones, sea urchins, sea cucumbers, mussels, small crabs, different kinds of seashells and other tiny fishes. There were even dead stingrays on the sand! The water is really rich in marine life! Pity though we didn’t see a sea horse!  Our fun began again by picking up some rare shells we saw which we brought with us back to the mainland. 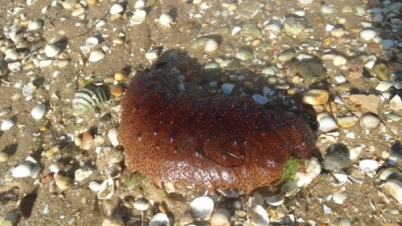 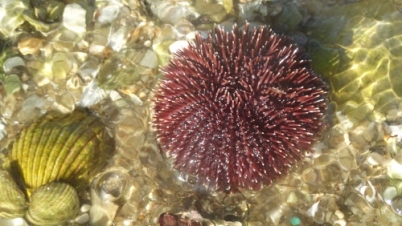 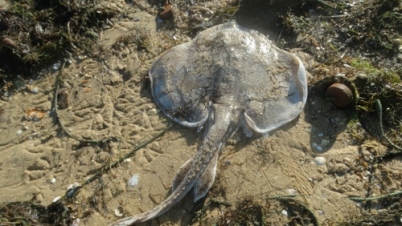 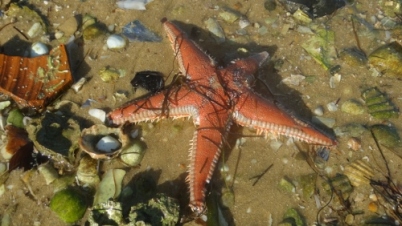 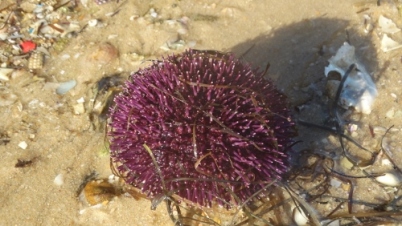 The rich marine life in Culatra

The fishing port was just small, but full of boats! Fishermen were busy doing their work, cleaning their boats and nets, hauling in the catch for the day, and some were preparing traps for the crabs. There are also small fishermen’s huts found on the shore, and a tractor, the only motor vehicle on the island, which the locals use to pull the boats in and out of the water. 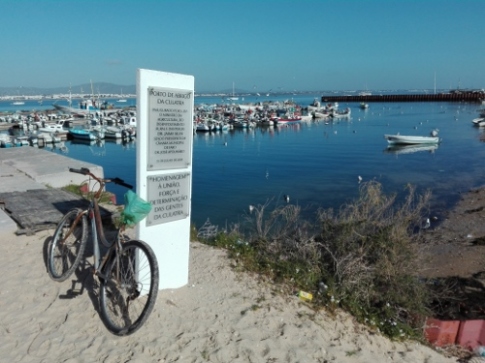 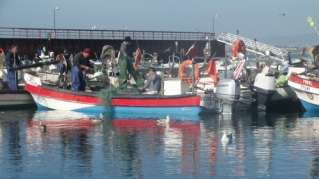 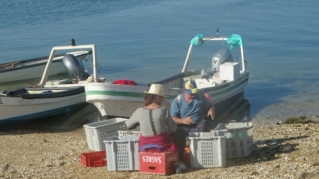 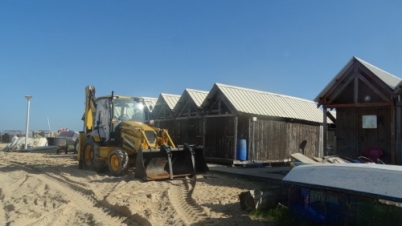 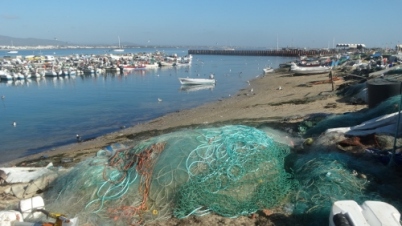 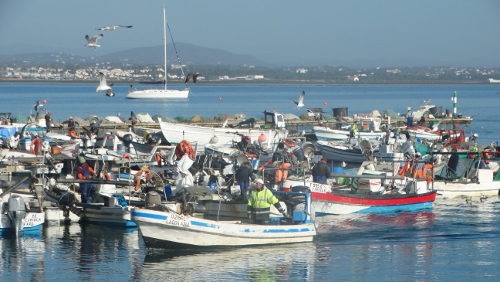 Hans and I wandered around the tiny village, It is really a fishermen’s village where there seems to be more boats than houses. There is an easy atmosphere in the village; a small community where everybody knows everyone! The houses are all small and have cubic or rectangular forms . Majority are whitewashed, except for a handful which are painted in yellow, orange and green colors. Some bougainvillas and other wild plants adorn the front yards; there is a charming little house which yard is decorated with different shells hanging in an old fishnet. Quite adorable! 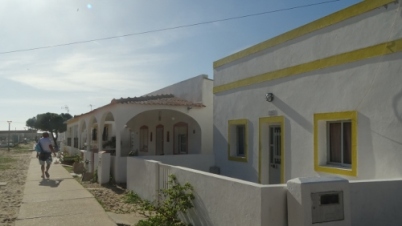 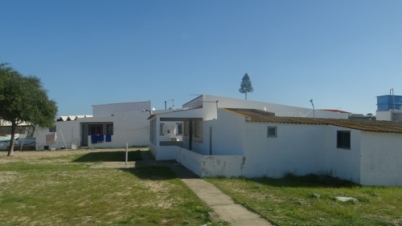 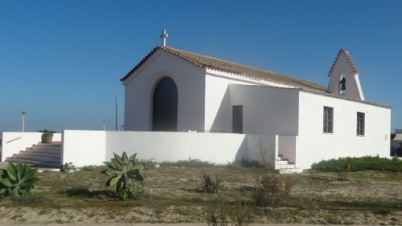 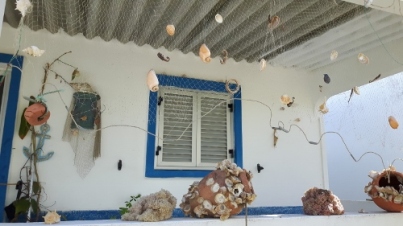 The Island of Culatra and its houses

There are a couple of restaurants and a small mini-mercado, a church,a social building and even a school. The village is free from  vehicular traffic as there are no motor vehicles there except for a tractor. Roads are not paved but sandy and narrow.  Culatra is near the mainland, but it has retained its authenticity!

After passing the school, Hans and I followed a long wooden boardwalk that led us to our hidden getaway – the Beach! My goodness, what beautiful! The beach is as long as the length of the extensive island, and with the view of the lighthouse at the western end. It has fine golden sand; the water is calm, clean and transparent in color. On the shore are different kinds of open shells washed away by the tides. It is one of the best beaches we have seen in the Algarve! 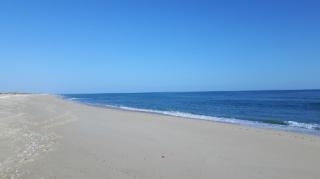 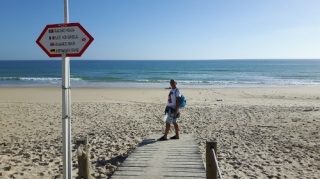 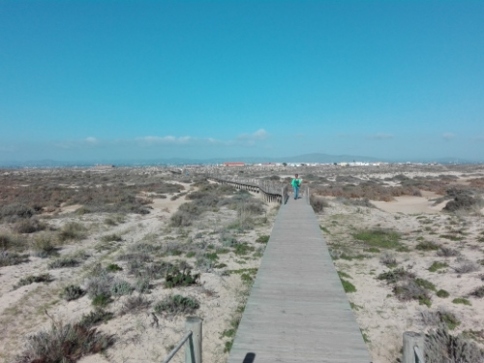 It has a natural setting, no restaurants, beach bars  and souvenir shops on sight; no sunbeds, sun umbrellas  or chairs! No commercial activity possible! We could imagine ourselves lying  on the beach days after days! The tranquillity and beauty  and the solitude are incomparable!  Hans took the first opportunity  to take  a swim! He urged me to do the same, but I didn’t do it as I didn’t have any swimwear and towel with me. I just contented myself with lying on the sand, collecting some shells and bathing my feet in the water. It was equally refreshing! 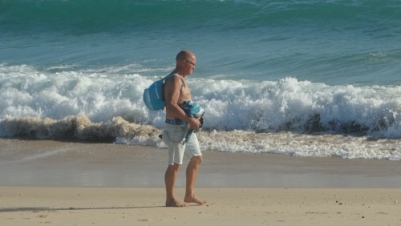 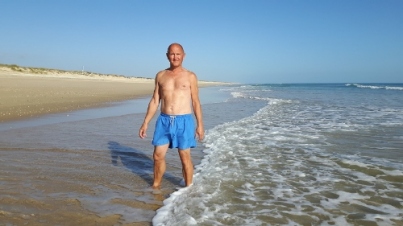 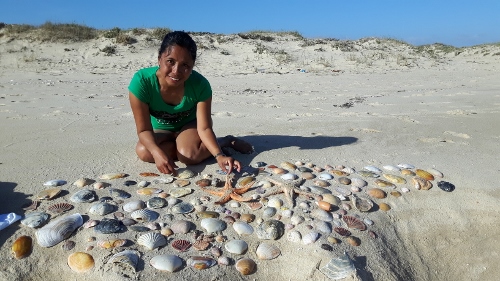 After almost 2 hours on the beach, it was sadly time to go. We walked the rest of the beach up to the lighthouse . We had to catch the 16.00 ferry back to the mainland and we planned to take it from Farol island. Farol is actually not another island, but just a part of Culatra. It is home to Santa Maria Lighthouse, which we didn’t have much time to see as we were already in a hurry, afraid to miss the ferry. 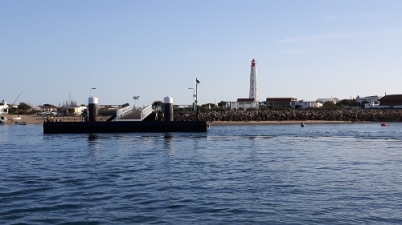 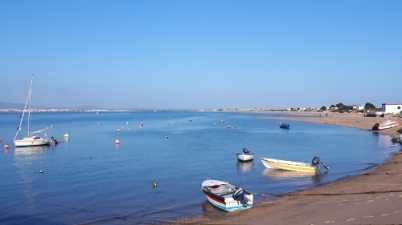 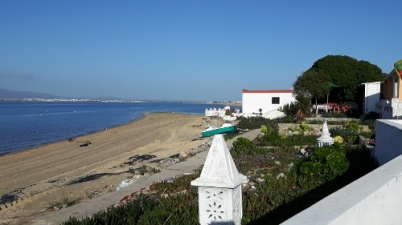 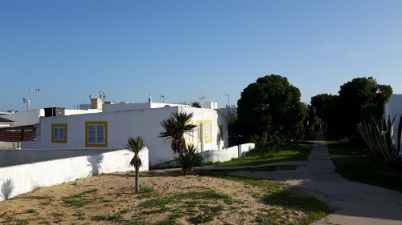 However, we still had 30 minutes before the ferry came, so we used the time to take a quick stroll at Farol. Like in Culatra, the houses here are small and cubic in forms. There are less people living here, but more houses as these are intended for holiday rentals.  There is a small jetty, where about 5 boats are moored, but the water was not as exciting as in Culatra.  The fery boat arrived, we bought ticket to the old man on the boat, and sailed back to the mainland of Olhao.

In just half an hour, we were back to the present! The promenade was busy; people were everywhere especially at the market. Roads were full of traffic from cars, trucks and other vehicles which emit dirty air from their engines! Yes, our one day in the hidden paradise is over. We are back to the crazy world! 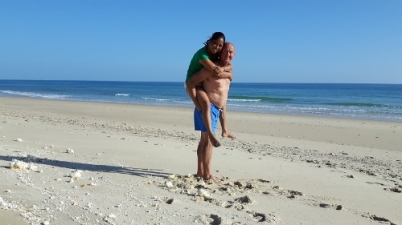 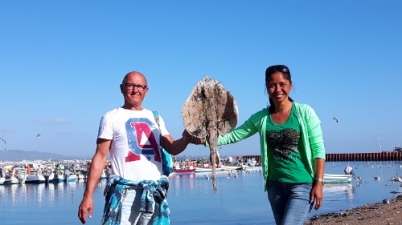