Coming from a country where  80-85% % of its people are Catholic, we considered ourselves blessed and privileged that we had the chance to visit the town of Lisieux in France and venerate St. Therese of Child Jesus. Having grown up in a small town in the Philippines where a small Carmelite monastery still stands, St. Therese is known to me, and somewhat deeply influenced me with my way of living and believing. That’s why when we saw in the map that had the chance to drive to Lisieux, we just grabbed it.

It is a free mix parking area just opposite the basilica. It can for sure accomodate 15 campers. One can also park for free at the carpark near the Tourist Information Office, where they have services for campers, tokens of which can be bought at the office. Address : Rue de Alancon 14100 Lisieux.

FOLLOWING IN THE FOOTSTEPS OF ST. THERESE OF CHILD JESUS

St Thérèse of the Child Jesus and the Holy Face, Patroness of all Missionaries and the Missions, Patroness of France and Doctor of the Church was born in Alençon on 2 January 1873 the last of nine children born to Louis and Zélie Martin. She was christened Marie-Françoise-Thérèse. She spent her religious life in graceful  silence, contemplation and continual prayers. Her prayers and thoughts were complied in her autobiogpahy, Story of a Soul.

″For me prayer is an aspiration of the heart, it is a simple glance directed to heaven, it is a cry of gratitude and love in the midst of trial, as well as joy; finally, it is something great, supernatural which expands my soul and unites me to Jesus.″  (St. Therese)

During our three-day visit to Lisieux, Hans and I visited the sites where St. Therese had spent parts of her life. Come and join us in retracing her steps to holiness.

When the mother of St. Therese died in 1887, the family moved to this house which is situated just outside Lisieux, on a littleroad called “Chemin du Paradis”(Paradise way). Visitors can visit the dining room, the family  room and St. Therese’s room, where she was mirasculously cured from a long illness. A  lock of her hair is also displayed on the wall. The garden is well-kept, with a sculpture showing her and her father. St. Therese spent her childhood (from age 4 ½) here until she entered the Carmelite monastery at the young age of 15. Visit is free of charge, but donation is welcome to maintain the building.

The house of the Martins, Les Buissonnets 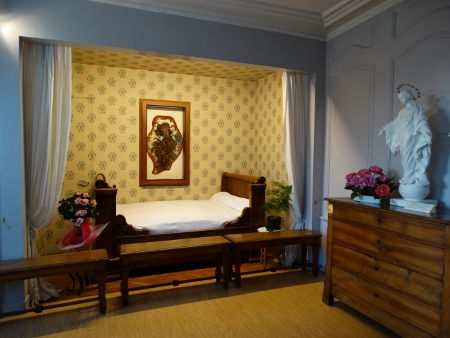 The bedroom of St. Therese.

2.   The Basilica of St. Therese of Lisieux

This basilica, being the second largest place of pilgrimage in France,  was constructed in 1929, blessed in 1937 and consecrated in 1954. It was built to honor St. Therese of Child  Jesus, the patron saint of the missionaries. The relics of the saint are placed under the dome, and a relic (bone of her right arm) is displayed in the basilica to be honored and venerated. What is so astonishingly remarkable in this basilica, aside from its size, are its walls and crypt walls which are all decorated with mosaics.The reliquary of St. Therese’s parents. Blessed Louis and Zeile Martin,  are found in the crypt, who by the way,  will be canonized , one week as of this writing, on October 18, 20015 at St. Peter’s Square in Rome. 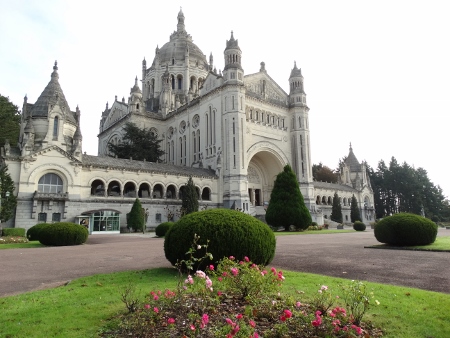 The impressive Basilica of St. Therese in Lisieux

Altar of veneration for St. Therese of Child Jesus

The mosaic-filled nave of the Basilica 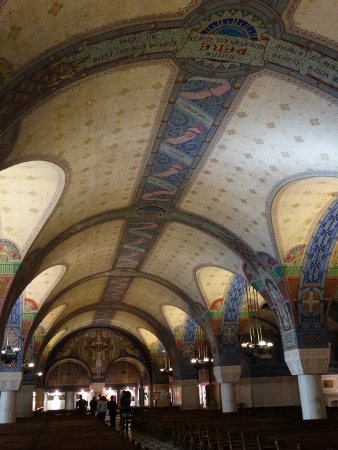 Impressive crypt of the Basilica

The Carmelite convent in Lisieux was founded in 1838. When Thérèse Martin entered it on the 9th April 1888, there were 26 Sisters in it, their average age being 47. St. Therese entered this monastery at age 15 and spent nine joyful and difficult community life here until she died of tubercolusis at the age of 24. The chapel of the monastery contains the saintś tomb, a marble figure on top represents her on her deathbed, dressed in a carmelite habit.

The carmel of Lisieux

The marble figure of St. Therese

Hans and I attended the Holy mass at the crypt of the Basilique. Although it was in French, and we couldn’t understand a thing, it was still good as we felt the blessings of God. The following morning, I went to another mass, this time at the Chapel of the Carmelite Monastery.

The nave of the cathedral

This Gothic cathedral built in the late 12th century is where St. Therese received her first Holy Communion. The family Martin offerred to build a high altar in this building.

All in all is Lisieux a nice city to visit. Not only for its religious heritage but also the city seemed to be a friendly one with nice shopping stores and simple squares. It has also a big Mediatheque were we went a couple of times to do some internet. It is there free and we could just use our own laptop. If ever we have  the chance to go here again, we would gladly do it. Maybe on our way back to Spain? Who knows?