Our camper adventure in The Czech Republic was coming to an end. We’ve seen some highlights and downlights. But we would not leave the country without first visiting the country’s major supplier of beer….PLZEN. Plzen, also known as Pilsen, is synonymous to Beer. Of course, the city has also other attractions, being the European Capital of Culture for 2015. But it was the thoughts of Beer that brought us to the city. So after a two-day visit in Prague, we drove another 92 kilometers to reach the city. We left Prague at 10.30 in the morning, and after about 1.5 hour-drive, we arrived at the Urquell Brewery. We parked our camper at the parking area for visitors, had a tour in the beer brewery, and after that, made a quick visit at the city center.

OUR VISIT TO PILSNER URQUELL BREWERY

The Pilsner Urquell Brewery, which started brewing beer since 1842,  is one of the oldest running brewery in the country. As such, it has more than 160 years of existence, providing not only the Czech Republic, but also the rest of the world with its famous  exceptional and authentically brewed Lager beer.  A visit to the brewery cost 200 crowns (kr). Hans got a discount of 80 crowns. All in all, we paid 350 crowns (including a visitor guidebook which cost 30 crowns).

It was a very delightful and interesting guided visit which lasted for 100 minutes. Our visit started at the Visitor’s Center where we received information about the Brewery’s history and saw the different award memorabilia and documents of the brewery.

After that, a bus brought us to the Packaging Hall where we saw thousands of beer being bottled all day long! The hall has total area of more than 20,000 sq.meters, where approximately 120,000 1-liter glass bottled beer are produced! The sound of the machines and the breaking bottles on the band was deafening. The aroma  of beer filled the hall and it was so was intoxicating! 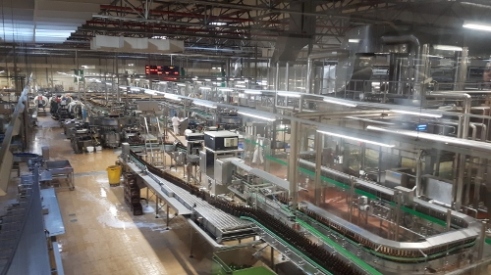 After an intoxicating visit to the packaging hall, the bus brought us to another part of the complex where we used the biggest human elevator I have ever seen. Then we watched a 180-degrees short film about the history of Urquell; we then passed by a kind of gallery where the raw materials were exhibited and the process of beer production was explained. Afterwards we went to the historical brewhouse where Pilsner Urquell beer was brewed for almost 75 years until 2005.  Short after that, we went to the current brewhouse, referred to as the heart of the brewery because it is where the most important part of beer production takes place. 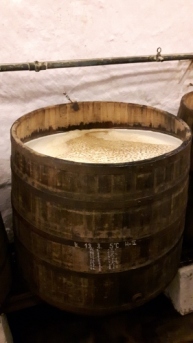 The highlight of our tour was our visit to the cellars. These underground cellars with a length of 9 kilometers and floor area of 32,000 sq. meters, has a depth of about 12-21 meters. We walked through the labyrinth of tunnels with damp and wet concrete floors and saw huge tons filled with beer. At the end of the maze, we were rewarded with a glass of refreshing all-natural Urquell Pilsner Beer in its unadulterated form! We enjoyed and ended the tour with cheers! 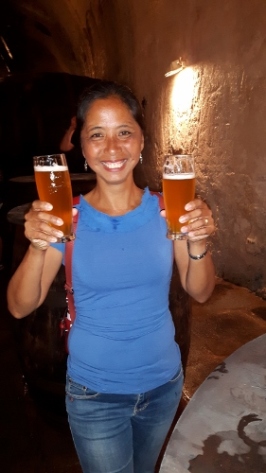 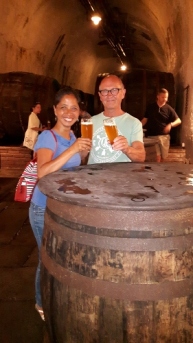 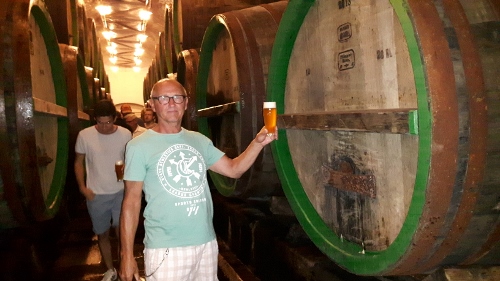 How To Taste Beer :

The color of beer is very important. The best beers usually have a distinctive , attractive and subtle color inviting the consumer to have a drink. Pilsner Urquell beer is of golden almost amber color.

Swirl the beer gently in the glass. This helps to pull out the beer’s aroma.

A significant part of the overall impression of the beer is its aroma. Pilsner Urquell has a subtle, pleasantly hoppy aroma.

When tasting beer, the beverage surrounds your tongue. With the first sip, you can feel its subtle fizziness, Pilsner Urquell beer has a pleasant. Full and balanced taste.

A QUICK TOUR OF THE CITY

After the tour of the brewery, Hans and I went to the city to have some sightseeing. It was just a 15-minute walk from the brewery, passing through a nice park. We were expecting much about the city, being once a Capital of Culture. But we were greatly disappointed! It was Saturday afternoon, about 3 , and the whole city center was quiet! There was again nothing to do! Everything was closed, except for a few cafes. The main square where the church was also located, was also not that impressive. Hans and I walked around, hoping to see or stumble upon something spectacular. But there was nothing! After an hour, we decided to go back to the brewery. We fetched our camper and drove away, ending our day trip to the City Of Beer!

END OF OUR CZECH ADVENTURE

As it was still early, we didn’t want to waste our time and stay for no special reason in Plzen. So we decided to start our journey back to The Netherlands. But I had still one place on my list and that is the Spa city of Karlovy Vary. It was anyway on our route back home. So we drove 80 kilometers southeast of Plzen.  But then we were confronted with parking issue. There was no possibility for wild parking. Even for a distance of 6 kilometers to the center, parking had to be paid, and not just for a small amount. We even drove up to the center and had a quick glimpse of it. Hans was not so impressed with those modern beautifully constructed hotels with portiers. We had no choice but to drive away, followed a road going up, until we had no desire to drive back again. Until at one irititating moment, Hans decided to just leave and drive as far as he could. So to make the story short, we drove a total of 320 kilometers from Karlovy Vary in Czech Republic to Dresden in Germany, arriving there at 21.45 in the evening. We came back in one of our  favourite places during this adventure; thus putting an abrupt end to our adventure in the Czech Republic and also to this season.  We stayed one day in Dresden; then we drove slowly back to Gaanderen, with a stopover and spending one day in Braunschweig (which is 310 kilometers from Dresden).