Having spending quite relaxed days in Salzgitter, mainly doing some cycling, fishing and walking around the Salzgitter-See and occassionaly going to the town center,  we felt it was again time to hit the road. So we left Salzgitter on a Tuesday morning, drove first to Salder Museum which was 3 kilometers from the town center, visited the castle, before finally arriving in Goslar.  We parked first at an open mix-parking at Osterode (near the Breites Tor) where the town fair has just taken place. After assessing the place and finding it not to our liking, we drove 2.5 kilometers further to the next parking, Parking Fullekuhle.  We found it better than the first parking, so we decided to park here and stayed here for three days, from July 12-14, 2016. 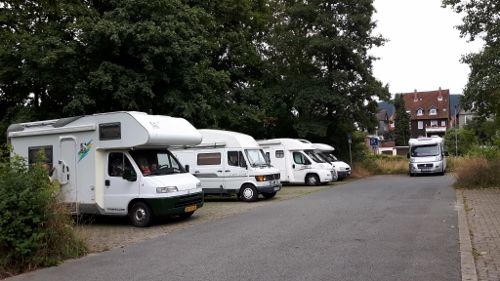 It is a free mix-parking about 1 kilometer from the city center with reserved areas for mobilehomes. There are however no other facilities. Some complained about the traffic noise, but we didn’t have any problem with that. It is an ideal place to visit Goslar.

THE CITY OF GOSLAR

A town located at the edge of the Harz mountains in Lower Saxony in Germany, Goslar is a mixture of authentic and modern city which is rich in history and architectural jewels. It has an authentic old town which is listed at the UNESCO World Heritage Site with lots of finely-timbered houses, churches, chapels, museums and even an imperial palace. The Alstadt (Old Town) is full of cozy restaurants, bars, hotels and shops (both big and small). There are lots to see both in and around the city that the best thing to discover them is to go on a walking tour. A city map which we bought for 1.50 euro from the Tourist Office contained three suggested walking tours, which we all followed. These walks all start at the Marktplatz. This enabled us to see more of the city than a regular day tourist.

a. WALK THROUGH THE UPPER TOWN

This walk which was supposed to be done in about 2.5 hours, took us 5 hours. It was quite long, but it was enjoyable and entertaining; not tiring at all. It is a walk in the upper part of the city, mainly through the old town or  Altstadt. We started our walk at 11 in the morning with a cup of coffee by BackWerk, a local café/bakery in town. Afterwards, we went to Marktplatz. This lovely  square is considered the heart of the Old Town, with some remarkable buildings like the Rathaus, Restaurant Schiefer with the carillon, the Kaiserworth with its striking orange façade, and the fountain in the middle with a golden eagle sculpture, the symbol of Goslar. We climbed up to the Rathaus and enjoyed a marvellous view of the Marktplatz. We didn’t enter the Hall of Homage as entrance was 3.50 pp. 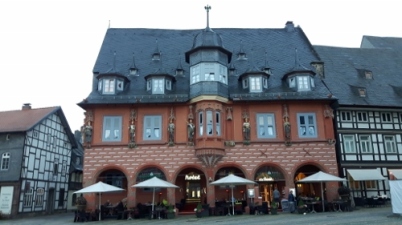 Our next stop was at the Marktkirche, the Church of St. Cosmas and St. Damian, a 12th century church donated by the mine owners to the people of Goslar. It has a magnificent pulpit, a really old church bell on display and one of the most beautiful baptismal basins we have ever seen. There is a possibility to climb up the towers, but we didn’t do that. 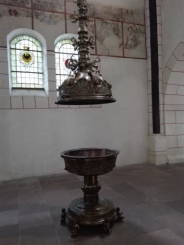 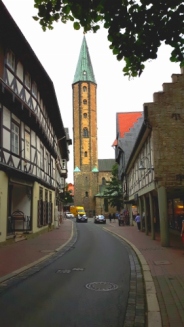 Church of Sts. Cosmas and Damian

Next we went to the old Great Holy Cross in Hoher Weg, an old hospital which now houses some shops for local artesans. We stayed quite a long time here waiting for the rain to stop, visiting the Jagersmuseum in between. After that we went to the courtyard to see some wonderful shops like the glass shop and crafts shop and almost bought some really expensive items. Good thing we could still control ourselves ! 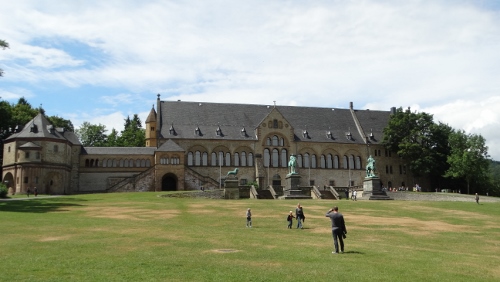 Walking on, we arrived at the Kaiserplatz where the Imperial palace is found. This dominant palace was built in 11th century and restord in the 19th century. Entrance to the building is 7.50 pp. We didn’t enter the palace/museum, but spent lots of time taking pictures and just sitting/resting at the grounds. We also visited the gardens at the back of the palace, but it was not nice and not maintained at all! 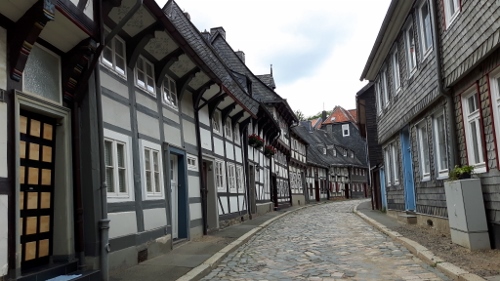 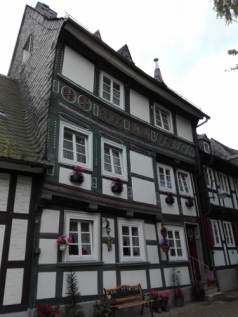 After that, we walked to Liebfrauenberg, where some of the nice timber houses are found. From here on we just followed the route, passing quiet cobbled streets aligned with lots of finely-timbered houses. When we thought we have seen them all in Wolfenbuttel, we were wrong. Goslar is a bigger version of Wolfenbuttel. The normal building style is that of craftwork houses’some houses have special sayings or symbols decorated on the beams of the houses. Some are a bit crooked, but that just add to the authenticity of the construction. The most quiet and nicest street was at Peterstrasse, the area where the mine workers used to live before. 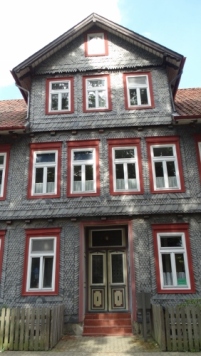 We had a short break at an antique shop we saw at An der Gose. Hans’search for his old clock finally came to an end. He bought one here for 40 euro.

It was already 2 pm and we haven’t had our lunch yet. We didn’t bring anything with us…no drinks or anything to munch. We continued our walk and arrived at Frankenberger Plan. We went to visit the Frankerbergger Church of St. Peter and Paul, a Romanesque basilica from 12 century. Here Hans had a long conversation with the guard who told him about the history of the church and the plans for rehabilitation.

Church of Sts. Peter and Paul

From here on, we continued our walk until we reached the Moncheahua museum, walked past it, until we reached Vititor or Vittis Gate. As it was so near to our camper, we decided to walk to the camper and have a break. We did so, had an hour break, and continued our walk. We passed a very nice and cozy square, the Schunhof with its half-timbered building with covered footpath. Next to it is the city Library from 1526 with impressive wood carvings. It was a little before 6 pm when we were back at Marktplatz, just in time to listen and watch the carillon. So ended our walk No.1

b.  WALK THROUGH THE LOWER TOWN

You’d think we were tired from walking the whole day! You were right, in a way. But it was still early and light, so we decided to do the second walk. The second walk is around the lower part of the city. Contrary to the first, the second walk was done in just about 2 hours. As usual, it started at Marktplatz. We passed the Die Butterhanne Restaurant on the left side of the Rathaus, and came to Museum’s River bank where we saw the Goslar Museum and Tin museum, which were already closed at that time.

We followed the path along the river An der Abzuct, passing some impressive houses along the way. We passed the Jewish cemetery, a house where Jewish people lived before, St. Anne’s Foundation, the impressive Breites Tor and as last, the St. Stephani Church.  From here on, we just followed the sign back to the Marktplatz again. It was 8.30 in the evening when we finished the walk, and the city was quite deserted already. 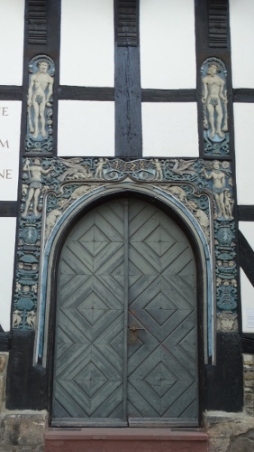 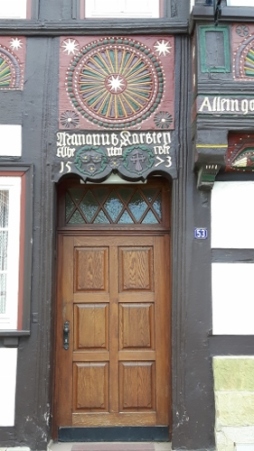 c.  WALK AROUND THE TOWN FORTIFICATION

This is the third walk which we did on our third day in Goslar, with a side trip to Rammelsberg Museum. This walk is along the town’s fortifications, meaning we had to walk mostly outside the city center. We did not start at the Marktplatz as intended, but by Hotel Achtermann as it was nearer to our parking area. After having our coffee at Wolf Bakery located near the Bannhof, we started our day walk at 11.30. We crossed the footbridge beside the hotel and arrived at our first stop, the ruins of St. George Church and on the other side of the street, the monument of Bismarck with an amazing view over the city. We then followed the footpad along the train rails, and came out in the Breites Tor, the best preserved fortified tower from 13 th century. We crossed the street and walked at the back of Werderhof. From here on, we had a nice lazy stroll in the park, with a couple of ponds and benches. We passed by another fortified tower with 6 meter thick walls and now a Middle Ages Museum, the Zwinger. A little picture taking here, and then we continued our walk  up to Kaiserplatz.

We had some rest here, afterwards followed the route again until we arrived at Klaus Chapel by Bergstrasse where we made a detour and walked extra 2 kilometers to Rammelsberg Weltkulturerbe. Rammelsberg Weltkulturerbe was once a big mining area which was closed down in 1988. It was converted into a museum and is now listed at UNESCO World Heritage Site. It was long walk, but we didn’t mind. It was 2 pm when we arrived at Rammelsberg. Entrance fee is 8 pp . We just went inside the court, and looked around. Hans even dared to enter some of the exhibition halls without proper ticket!  Anyway, it was interesting for him. 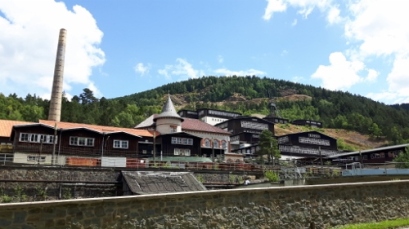 We continued following the route (which was a bit difficult as we had to do it backwards), and passed some ancestral patrician mansions, until we reached Schunhof again. We then walked our way back to Marktplatz.

Those were long busy walking days we have spent in Goslar. We covered so many kilometres, walked a lot, saw a lot, photographed a lot! We have seen a lot of Goslar than an average tourist would have seen. And from what we have seen, we could say, GOSLAR is indeed one of the most beautiful and authentic cities in Germany.