FISHING EXPEDITION AT HELLESYLT AND STRANDA

After having our short reunion with the family in Olden, we continued our own camper adventure. Because of the bad weather, Kim and family decided to head down back in the vicinity of Oslo where the forecast was a bit promising, and Hans and I continued our route up north, going to Alesund. It was early in the morning, Saturday, when we left Camping Oldevatn. After about 55 kilometers of driving, we reached the small village of Hellesylt. We drove down to it, not knowing what it had to offer, because we just wanted to see the waterfalls, the sign which we saw along the road. From Rv 60, we turned a sharp turn to the right and followed the board to Hellesylt. We first parked in front of Coop supermarket, had a walk along the village until we saw a possible parking area, just very near at the ferry terminal. We stayed here for two days, from  July 18-19, 2015; we  saw the many tourists going on and off the ferry to go to Geiranger. Luckily the ferry stops at 8 pm, then we had some needed rest.

The Hellesylt Waterfalls is one of the most photographed attractions in Hellesylt. It is found in the center of the village, between two bridges, Hoge Bridge and Hellesylt Bridge. It is not a high waterfalls, but its waters drums down to the granite rock before finally finding its way to the fjord. It is rather an impressive sight! It is one waterfall that we didn’t have to exert too much effort to see, as it is easily seen from the road. 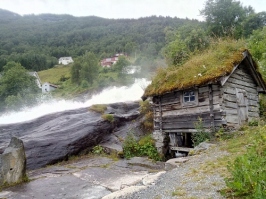 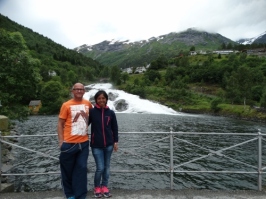 The HIKE TO ASEN

Hans and I obtained a hiking map from the tourist office. There were several hikes to choose from, and we opted for a not too difficult one to do: The Asen hike. It was just an easy hike, with a good view of the fjord and the village of Hellesylt. We parked the camper by the small football stadium, and from there we walked about half a kilometre to the begin point of the hike, walking to the main road then turning left to cross the river via an old bridge, then following the road until we arrived at the signpost to Asen. 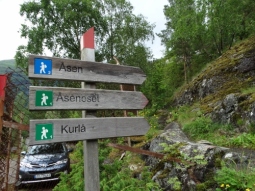 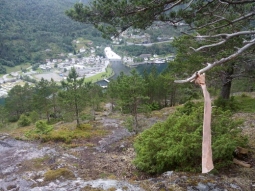 As I have said earlier, the hike was not too difficult; it could be for everyone, as long as one is physically fit. It didn’t require special hiking skills. The trail is marked with red-painted V which were very visible along the way. There were parts that were steep, that there were chains at some strategic points where hikers could hold on to. The rest of the path was hilly, a bit stony and muddy. After one hour, we reached Asen. There was a very nice viewing point, with a picnic table. We had our coffee break here, at the same time, admiring the views of the village of Hellesylt, its waterfalls, the fjord, and also the coming and going of the cruise and ferry ships. 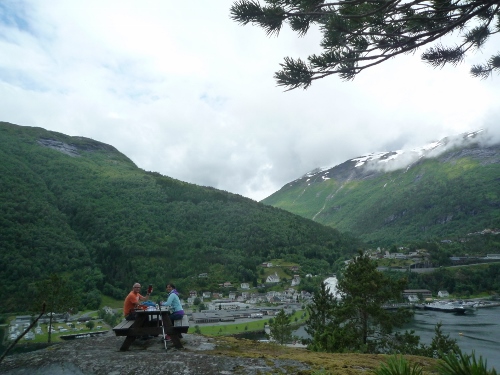 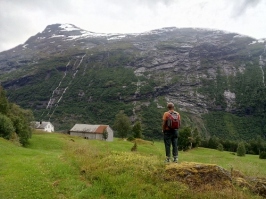 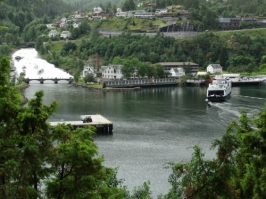 As it was still early, we decided to continue the hike up to Asenaken. At first, the path was still okay, but after a while, we were going very steep and in the middle of the forest, and we really had no idea where we were heading to. And because we were not quite prepared for this hike, we decided to just go back down the mountain, and just go fishing.

We had quite a successful fishing spree in Hellesylt, and also in Stranda the following day. The first day, we caught 5 fishes, with me catching my first 2 fishes! A Pollock and small codfish! The following day, after the hike, we went fishing again, and again we had 5 fishes. But it was rather annoying because, there were times that lots of Japanese tourists were watching us, while waiting for their ferry, and we were glad when they were gone again. And just when we wanted to impress them with our catch, we had no bait! 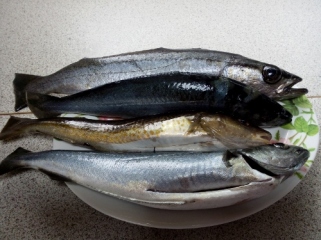 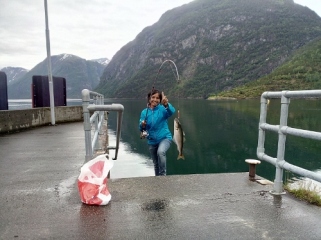 The next day, we drove up further to Stranda, and there we had a couple of hours stop to go fishing by the harbour. We saw salmon fishes springing out of the fjord (near the river), and we tried to catch at least one, but to no success LInstead, we caught 2 polock and 1 torsk again. Well, better that than nothing.

After these fishing days, we then continued driving up north…..on our way to Alesund…. 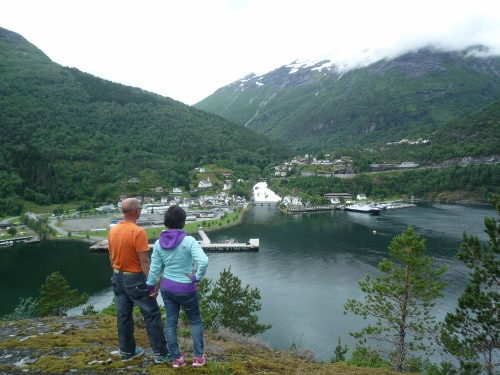