Parque Natural Cabo de Gata-Nijar is one of the most impressive natural parks in Spain. Located in the province of Almeria which included the municipalities of Almeria, Nijar and Carboneras, the area was declared a natural park in December 23, 1987. Owing to the area’s proximity to Sierra de Gata which is considered to be one of Europe’s volcanic massif,  the park has very dramatic landscapes : a combination of rugged coastlines with sandy to rocky beaches situated  between romantic coves and steep cliffs, spectacular rock shapes  and chains of mountains, each top reckoning to be conquered.

We have explored the park as much as we could , and we had the most amazing times. We started our exploration in a small village of La Fabriquilla and ended in the town of Carboneras. What we have experienced and witnessed during this adventure would surely go in the books, as we had one of the most amazing times  during our camper adventure!

La Fabriquilla is a small village with at least 10 houses and one small restaurant. It was a good starting point for exploring the nearby points of interests such as San Miguel Cabo de Gata, Faro Cabo de Gata and the Las Salinas. We stayed here for four days, enjoying the sea with its wild waves, the mountains and the tranquillity the village offerred.

Cabo de Gata is about 6 kilometers from La Fabriquilla. We went to visit this village on a Saturday (small market day) with our bikes, passing by the old Salt Mines Village and La Almadraba. After visiting the market, we went to the old Guardia Civil Building which is situated along the beach. Then we biked to Las Salinas, where we spent some times observing flamingos. Unfortunately, they were so far that we were not able to have a closer look. After that, we went on to the old church which belongs to the old Salt Mines village. Behind it were small dilapidated houses which probably belonged to the salt miners before.

Faro Cabo de Gata is about 2 kilometers from where we camped. It could be reached by cars or by hiking. We did the latter. It took us one hour to reach the lighthouse, and another two hours to get back, as we tried to look for a path through the mountains, which we didn’t find! The views however were spectacular! The lighthouse was built over the ancient castle of St. Anthony de Padua in 1861. There was a viewing point in the area, offering amazing views of the sea and the Las Sirenas Reef (Volcanic chimney). 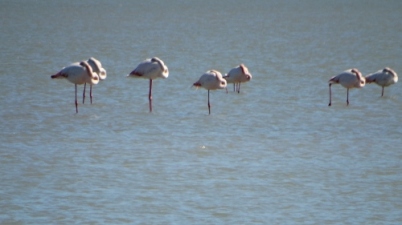 The Flamingos by the Salinas

San Jose, which is about 27 kilometers from La Fabriquilla is a lot bigger than the latter. It is also more touristic and the price of bread is more expensive ! We just stayed here for a half day, after doing a short hike of 3 hours to Playa delos Genoveses. Our objective was to do the 6-km hike up to Playa Monsul, but because of bad weather, we were forced to just go back to the town center after reaching Playa delos Genoveses. It was a very nice hike along the coast, the trail is signposted by a white/blue paint on stones or posts. Playa delos Genoveses is a a very quiet secluded beach, with lots of trees as palmtrees, mahogany and cactus. It is one place that we would very much like to come back to and finish our hike next time.

The town of San Jose

La Isleta del Moro is another small fishing village found in the natural park. There are I think about 100 houses, but half of them are just empty. There is a small church in the center, one small grocery store, a health center, and a small school. An added charm of the village is the old common laundry area. I myself did my laundry here twice.

One of the points of interests in the village is the Rocky Isle, which amusingly is home for lots of seagulls! There is a nice view of Playa del Penon Blanco and the surrounding coves. Walking a bit further, there is a Mirador with wonderful views of the beaches, the Rocky isle and the neighbouring village, Los Escullos.

Another view, together with the Rock Isle

We did two small hikes while we were in La Isleta. The first one was a 3 km hike from La Isleta to Playa del Esparto in Los Escullos. It was a very nice hike. We passed by Playa Arcos, then explored the cliff nearby which was extraordinary. It was like walking on a big fossil beach/dunes: the white rockbeds have apart shapes and small holes in them; a silent witness of the million of years sedimentation and evolution of the area. Walking further, we passed the old San Felipe castle, and then finally reached Playa del Esparto. We were able to find a secluded beach area here for ourselves, thus we have rested quite uninterrupted, free from other dayhikers. 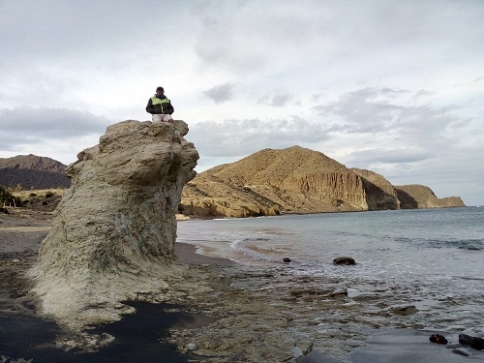 On top of special rock 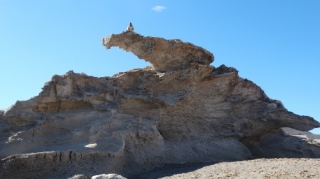 At Fossil dunes in Los Escullos

On top of Rock Isle

The second hike that we did was a 2-kilometer hike from La Isleta to Cala delos Toros. The path begins by our campsite, and we just followed the trail with white/blue marks. We walked around and on mountain edges, acquiring fabulous views of La Isleta and Los Escullos. Finally after 45 minutes, we reached Cala delos Toros. It is just a small cove with pebbled beach. We met here a Canadian couple hiking with their 8-month old daughter Kyra. After some rest, we continued our hike as we wanted to go as far as the Mirador dela Amatista. We became uninspired however when we saw where we were heading. We had to walk on a winding steep road again, and we were not quite happy about the idea so we decided to hike back to La Isleta.

About five kilometres away from La Isleta is the old mining village of Rodalquilar, found in the valley with the same name. Entering the village, we immediately experienced having mixture of emotions : desolation, sadness, unbelief and curiosity. At the entrance of the village was an effigy of a miner, as if welcoming us to his village. Then we drove past old miners houses which were all abandoned and in inhabitable conditions. It was like driving through a ghost town!

Entrance to the village

As long as we have settled ourselves (we found a parking area  in front of Jardin Botanico, behind the church), we went to visit the Casa Geoturistico (open from 9.00-14.00). It houses an exhibition about the different natural parks in Andalucia, an informative display and explanation about Cabo de Gata, the volcanic evolution, history of the mining industry in the village, and in the last room, an 18-minute video about the natural park, which sadly was in Spanish.

It was very interesting to read and learn more about the mining history in the village and how it reached its demise. Rodalquilar was a booming village in the early 1900s; the mines employing lots of people and the residents enjoying what we call a fairly good life complete with services and facilites. But as we all know, mining is not infinite, just like the case here. The minerals were all excavated and they couldn’t find gold anymore. It was the end of Gold fever and the people were brought back to harsh reality. The mines were closed in 1966 and most of the people abandoned the village. What we can see nowadays are the old brick damaged houses of the miners and the church which serves as silent witness to the prosperity the village once knew! A new part of the village has arise, which is like a kind of artists’ village. Situated behind the Casa Geoturistico is the old mines, or what has remained from it. The view from the highest point of the mine is amazing. You get to see the mines, the village of Rodalquilar and the surrounding mountains.

The Old Gold mine

After our visit to the Casa Geoturistico, we took a short visit to the Jardin Botanico (open from 9:00-14:00, free entrance). It is a nice garden with plants mostly herbs, cactus, palmtrees and some plants found in the mountains, deserts and seasides The following day, we did the Cerro del Cinto hike. It is an easy to average 10.7 circular hike which begins at the back of the Administrative Building. There is also a shorter version of the hike, the 4.5 km hike, but we opted to do the long version. We hiked for almost 6 hours, passing wonderful sceneries, mountain views, mine wells, mine excavation,  and old mining settlements. We even harvested some almond fruits along the way and saw a flock of sheep crossing one farmlot to another.  And at the end of the hike, after hiking around mountains, we came to the top of the old mine, where we stopped for quite some time and tried to imagine how it was here before when the place was full with activities. 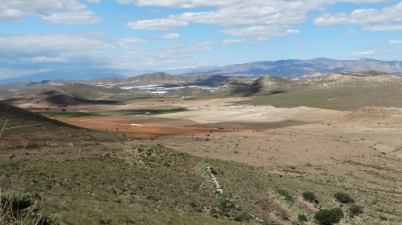 One of the wonderful views of the hike

Trying to find some gold