In the previous blog, I have written about our exploration of the breathtaking Natural  Park of Cabo de Gata – Nijar from La Fabriquilla to Rodalquilar.  Here is the second part of our trip, which ran from Las Negras to Carboneras.

Las Negras, which owed its name from the dark colored volcanic land in the area is the life-saving village for us! Having been on the road for more than a week exploring the park, our provisions have run out and we could not do some decent groceries in the last small villages we’ve been, as the shops were scarce. We were so delighted when we arrived in this village and found out that it had a reasonably good grocery store. Our weekend was saved!

Las Negras, unlike its neighbouring villages in the coast, is quite large. It has a lively atmosphere. There are a number of good restaurants scattered around the village, which were surprisingly full on a Sunday afternoon. We did two beautiful hikes in the village : the la Molata Hike and the Las-Negras-San Pedro Hike. These two hikes seemed to be popular as many people were doing these hikes when we were there.

a. La Molata hike, which begins from Playa El Playazo and ends at Cala del Cuervo is a 2-kilometer linear hike which runs along the coast with really wonderful views! It is a hike with average difficulty and begin at Playa El Playazo behind the old San Ramon Defense Tower which is a private property. We parked D’Traveller at Playa El Playazo( we stayed here for three days), a beautiful small beach which is quite popular among the Spaniards. It took us one hour to reach Cala del Cuervo. It was here that we caught a glimpse of the village of Las Negras. So we continued our hike up to the village. It took us another half an hour , walking some parts at the long steep concrete road       along the coast. We immediately did some needed groceries and hiked back again to Playa El Playazo. 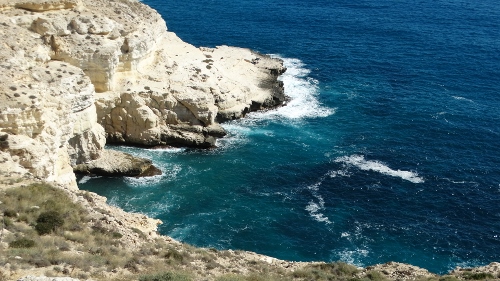 One of amazing views during the hike

It was Sunday when we did the hike, a very good day as the weather was cooperating : dry, sunny but not too warm. The hike begins at Calle Aguilas in Las Negras. At the end of the street , we followed a tractor road which is three km long, running along the edge of the mountain, and offerred us a wonderful arial view of the village. It was a bit boring though; the excitement began at the end of the tractor road , then we had to follow the trail via a dirt/gravel road which also runs along the coast, but quite steep. After another 1.5 km,  we reached a viewpoint for Cala San Pedro. It was a sight to behold! Beautiful! The waters were a combination of dark and light blue , and it looked like it was inviting us for a dip! Continuing our hike, we walked down past the old San Pedro Castle until we finally cam down to the beach area. It was like a good film location for Expeditie Robinson, a Dutch television program over survival. There are old small stone houses, some even have solar panel for electricity. On the beach are some groups enjoying the area, just lying around or making some music; some men were busy making shades made up of natural products; and a boat had just arrived bringing with it some more of day tourists who were too lazy maybe to take the hike. We were able to find a secluded area at the farthest end of the cove and stayed there for at least an hour. After that we hiked back to Las Negras.

Special rock at the beach

Santorini, a small coastal white village in Greece…that’s what came to my mind when I saw the village of Agua Amarga. The village, which is a fishing village but lives mostly on tourism, has white-washed houses , some of which have blue windows and doors and have giant cactus and bougainvillas in the front yards. It has a charming small main plaza  and the streets are narrow and some areas could be reached by climbing on to some concrete  steps. It has a nice urban beach complete with changing cabins, beach showers and playgrounds.

The village of Agua Amarga

This hike is a continuation of our hike in Las Negras to San Pedro. Only this time, we didn’t have to hike back to Las Negras, but only up to Cala El Plomo, which made the hike shorter : only about 5 kms. The hike begins at the roundabout at the entrance to the village. We followed the signboard with Sendero; then after 500 meter, there was an information board about the hike. We walked most of the parts through the mountains. After an hour, we caught sight of the small beach of De Enmedio; we walked further until we reached our final destination, the Cala El Plomo, where we stayed for at least an hour to rest. Playa El Plomo is a small pebbled beach with dark volcanic sand . There were at least 4 campers parked here; we have found a quiet secluded spot at the furthermost left side of the cove which was special because there were huge rocks in these area and there was a kind of rock bed everywhere. 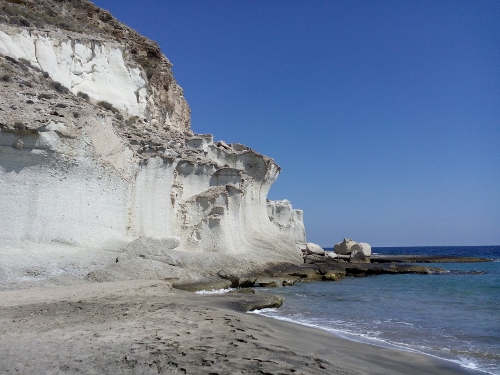 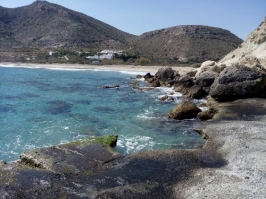 Returning back to Agua Amarga, we did another one hour stop over at Playa De Enmedio which we passed by earlier. The beach was more beautiful than the first. It has high massive chalky white cliffs, and under is uneven rock bedding. Its waters were crystal clear and serene. The beach was abandoned, except for another couple at the other end of the cove. It is one of the beautiful beaches we have seen in the park.

Carboneras is our last stop during our exploration of the natural park. It is also one of our favourite places in Spain, owing to its lovely coastline, cozy town atmosphere, and beautiful beach promenade. And of course, not to mention our good Café  Felipe which has become our favourite hangout when we’re in town, whether just to grab a cup of coffee or watch a football match on a wide TV screen, all the time being served with drinks and various delicious tapas.

Located in the center of town is the castle of San Andres which was built in 1559 to defend the coast from Berber attacks and Moorish uprising. At present, it is used for cultural exhibitions and activities.

The town of Carboneras with the cement factory

The Sendero Mesa-Roldan is a 2-kilometer long linear hike to the lighthouse of Mesa Roldan. The trail begins at the parking by Playa Delos Muertos and goes up to a steep concrete winding road to the lighthouse, where an old watch tower is also located. All the time, there are wonderful views of the surrounding mountains and the town of Carboneras. 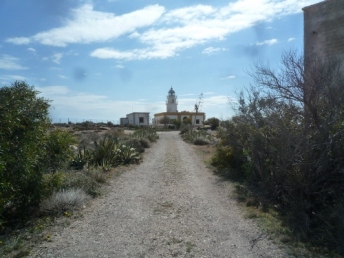 The Old Tower of Mesa Roldan , which was built in 18th century to control marine invasion, stands proudly at the top of the apth. On its left side is the Faro Mesa Roldan, which was built on 1875 on top of a volcanic rock mountain that once rose  from the sea more than 3 million years ago. It stands 222 meters above the sea. The views from these two monuments are simply amazing! Also the nearby village of Aqua Amarga and its beautiful coves are in good sight. 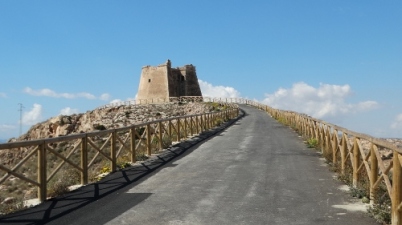 The tower of Mesa Roldan 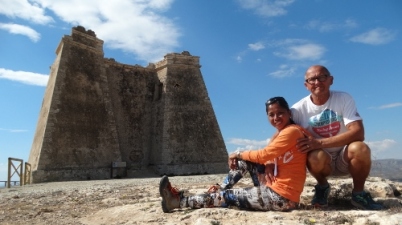 b. THE EXTRA-SPECIAL PLAYA DELOS MUERTOS

Carboneras has at elast 17 miles of beaches and coves, one is more beautiful than the other. We haven’t seen all of these beaches, but I think we were very fortunate the see the most beautiful of them all – the Playa delos Muertos which is situated about 5 kilometers south of Carboneras. The beach can be accessed via the aprking Los Muertos (found on the road between Carboneras and Agua Amarga) and by walking down the 500-meter long stony path down to the beach. About 1200 meters long, Playa delos Muertos is by far one of the best and most spectacular beaches Ive seen in Spain, which made it also one of my favourites. The beach is made up of gross sand, gravel and small pebbles and extra ordinary rock formations. Its waters, which are refreshingly cool and calm, are crystal-clear, and at the deeper part, has the colors of light green to blue to intense dark blue! 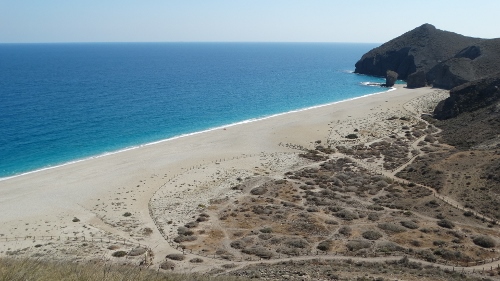 The beach, as seen from the Mirador

Being in the beach and enjoying its natural beauty is already quite a special experience! Even playing with the small pebbles and getting buried under them was fun! Playa delos Muertos – simply amazing! A good place to end our two-week adventure in Parque Natural Cabo de Gata-Nijar! 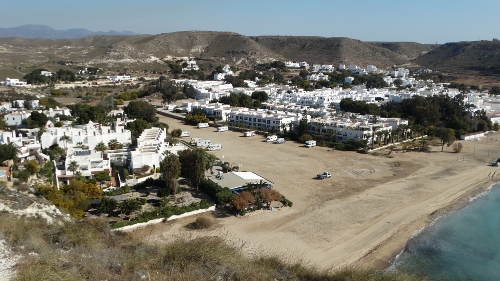