8 THINGS TO DO IN BILBAO

Bilbao is  the capital and largest city of Autonomous region of the Basque Country in Spain. In the last years, it is  transformed from a simple town to one of the historic and artistic cities in Spain. Being such, a visit to this fabulous city must surely be in your list. We have been to this wonderful city only once, but  what we have seen and experienced have left us mesmerized. Below are the things we strongly recommend to maximize your Bilbao Experience.

Bilbao is almost synonymous with this museum. Just like any normal tourist who visits Bilbao, we decided to begin our city exploration by visiting the famous Guggenheim Museum. Armed with a city map which we acquired from the Tourist Office, we searched for the museum, following the tramway which took us along the River Ria. The Museum building is of itself a magnificent construction  of art. The design and architecture is modern but not boring. It is majestuous, inside and outside. The entry is 13 euro per person,  but it is worth it! At the entrance stands Puppy, a floral dog and mascot of the museum .There is a theme which changes annually. During the time of our visit, the  theme was The Art of Our Time. We are not museum fanatics, but we both found Guggenheim really interesting and worthwhile to visit. It was enjoyable and memorable just walking around, looking at the works of arts which were on exhibits. Just being there is already an experience of itself!

After the visit, take some time to explore the vicinity of the museum as you can find some interesting landmarks, too.

Puppy,guarding the entrance to Guggenheim Museum

La Ribera is Bilbao’s covered market found in the old city center, believed to be Europe’s largest covered market. The market has two floors, both can be reached by stairs of elevators. Upon entering the market, you’ll be welcomed with the smell of fresh sea products, meat and vegetables. There are a variety of fish being sold, from not familiar ones to the most popular types. There are also a variety of sea shells and fruits of the sea, a lot of poultry products, and other meat products from pig, cow, rabbit, and lamb. And they are so cheap, that you’d like to fill your basket with. 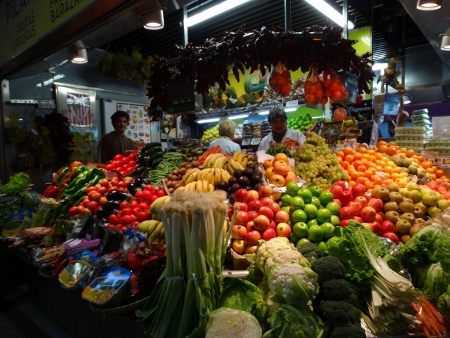 The Casco Viejo is Bilbao’s Old Town and it still has the charms of being such one, what with its narrow concrete streets, high beautiful houses, eye catching windows, and pleasant shops. When we toured this old part of the city, we just let ourselves got lost, particularly in Las Sietes Calles (The Seven Streets)  wandering from one street to the next, and everytime discovering some interesting corners. It was a Sunday when we did it, and it was extremely busy in the town. There was a flower market in the plaza. Many people were also strolling or just sitting at the plazas or cafes and bars. We took also our rest in front of Santiago Cathedral while watching one street artist performed his tricks. There was a even a band that was playing music while roaming around the city. Even though majority of the shops are closed on a Sunday, Casco Viejo is still the place to be during Sundays (or maybe any other day). In touring Casco Viejo, we saw also some religious buildings such as the Santiago Cathedral, San Anton Church, Iglesia delos Santos Juanes and the Basilica de Begonia. The latter can be reached by ascending the 231 steps of the Calzadas de Mallona. Unfortunately, we were not able to see these churches from the inside because they were only open during masses.

At the historic Casco Viejo one Sunday afternoon

4.  Have a Taste of Bilbao’s Pintxos

Pintxos and tapas are typical of Bilbao and it would be a shame if you don’t have a grab of some of these small artistic mouth-watering teasers.  For the experience, we went in one of the cozy Pintxos bar in Plaza Nuevo and Hans ordered cerveza and 2 Pintxos. Different sorts of Pintxos are just displayed on the bar; they all have the same fixed price from 1.50 a piece to 2 euro. And you just have to point out what you will have. It was all mouth-watering. But be sure to take track of what you order; before you know it, your wallet will be bleeding like hell!  By the way, there are a lot of that sort bars in Bilbao, and we found Plaza Nuevo as best. It plays as the meeting place where both locals and tourist hang out and mingle with each other , enjoying some drinks and pintxos.

The Biscay Bridge, built above the Ria Estuary, is 160 meters long and 50 meters high bridge that unites the villages of Portugalete and Getxo. Inaguarated on 1893, it is inscribed at the UNESCO World Heritage Site last 2006. There are 2 metro lines that go to Biscay bridge, Line 1 and Line 2, but it is advisable to take the Line 1 as it is shorter.  It is only a 15-minute ride, stepping out at Areeta station in Getxo.  The bridge is a massive engineering construction, all made of steel with strong big cables that support the bridge. And a hanging gondola that is attached on the bridge that transports people and vehicles. There are 2 ways of crossing the river : by taking the lift and walk along the pathway above the bridge (it costs 7 euro pp) , or riding the gondola (.35 cents pp).

The impressive made of steel Biscay Bridge

6.  Stroll Along the River Ria

The area along the banks of the River Ria provides one a magnificent varied views. We took long walks along the two banks of Ria. It was relaxing and enjoyable. Every now and then, we sat at some benches found at certain places along the banks. And for fun, we crossed bridges alternately such as the Punete de Arenal, Puente del Ayuntamiento, Zubizuri, Puente Pedro Arrupe. From the opposite of the Ria, we had a magnificent view of the Guggenheim together with the Berdola Tower and the Red tower at Dela Salve bridge.

View along the River Ria

Some 41 kms from Bilbao and 8 kms from Bermeo is the San Juan de Gastelugatxe, a precarious chapel erected on a coastal islet reached by a twisting footpath with 231 steps. This is considered one of the most photographed place in the Basque Country and won the most votes in the “Seven Natural Wonders of Spain.” Traditions say that if you reach the chapel and ring the bell 3 times, you will cast out evil spirits, or your wish that you make comes true. Unfortunately, when we went there, the footpath to the chapel was closed as they were busy repairing it. That was really a pity, as I really wanted to reach the chapel there. Anyway from the parking area, one has to walk about 5 minutes to reach the Mirador, a viewpoint and you’ll be rewarded with a spectacular view of the Hermitage San Juan and also of the nearby island, the Akatz island.

Bermeo, on the other hand,  is said to be one of the oldest fishing towns in the basque coast. It is home to a very old port and a Fisherman’s museum. It is a charming place as around it are houses, built in heights and have various colors. There are also a number of nice cafes and tavernas where you can  grab some tapas and coffee. A long walk up to end of the long pier will reward you with a very nice view of the Basque coast and the  island Izaro. This town has a similarity with Zumaia with the presence of narrow high stairs that connect one street from the other. Around the town are also sculptures like the fishvendor and dog with the fisherman,among others.

San Juan de Gastelugatxe, one of the most photographed spot in the Basque country

The tourist map/brochure advises that if you want to have Bilbao at your feet, you must go take the furnicular that will bring you to one of high places in Bilbao and from there you have a bird’s eyeview of the city. Another alternative is to take a busride from the city going to Kobeta . Take Bus 58 going to Mintegitxuate (either from La Ribera or Puente del Arsenal) and step out in Kobeta Mendia. It is only a 20 minute-ride that costs  1.25 pp per rit. And the busride is equally exciting as well, because it drives through narrow streets, sharp curves and high and low grounds. Sometimes we thought that 2 buses couldn’t fit on one of those narrow streets, but they did! Try to do the bus ride in a clear day or when the night begins to fall.

There you are! We hope we have inspired you to travel to Bilbao. And if you have been there already, we’d like to hear your experiences as well; feel free to add to the comments below.