DALEN AND THE PICTURE-PERFECT FARMSTEAD OF THE RUI SISTERS

Dalen is a small village located at the westernmost endpoint of the Telemark Canal in Østlandet region in Norway. It was not our plan to go to this place. On our way to Valle, we drove here only for a short coffee break, but fate interferred. What was planned as a short stopover became a 2-day stay.

Going to the Tourist Information Office, we became curious about the big poster displayed  infront of the office  about two old women who lived in the mountain and from there there is a marvellous view of the Telemark Canal. We inquired about it; we learned that it is a 1-km hike along a very steep mountain trails. The woman at the office advised us not to do this because the trail might be very slippery because of the rain the previous night. But knowing us, we wouldn’t wait till it dries up and the sky clears up! It was still cloudy then! So after doing some groceries at a nearby shop (Joker) where we had a nice chat with a Dutch immigrant who was working there, and having our coffee and hamburger in the camper, Hans and I prepared ourselves for yet another climb! This time to the RUI Farmland. 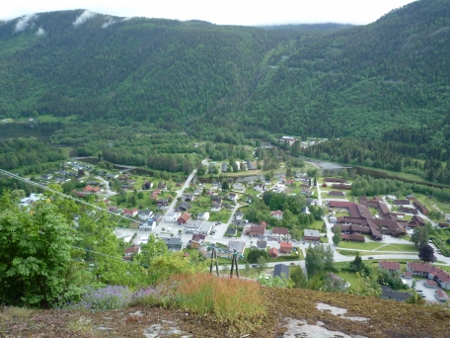 The small village of Dalen 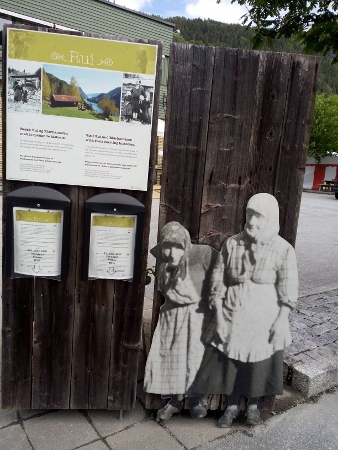 Display board of the Rui sisters

The Rui farmstead lies on the steep slopes of the mountain above Dalen, where the Rui sisters Ingerine and Gurine have lived all their lives until they died at age 90s. They never married, left the village only once when they visited the king of Norway, tended the farm, kept livestock and raised vegetables themselves using old fashioned agrarian tools. There is a short story about the family found on the old cottage in the mountains.

Ignoring the advise of the tourist worker, Hans and I went climbing. We put on our boots, dressed us a bit warm, took some drinks and fruit with us and also the umbrella, and then we began. Indeed, the way to the top was steep, narrow wet, muddy and slippery! We had to be very careful not to slip; keeping a good eye on the road as there were many big stones portruding out, and thus avoiding them as they could be very treacherous. It was a good thing we had hiking sticks with us, which Hans luckily found at the big waste container in Gaustatoppen. These sticks helped us in climbing up and obtaining some really good support. There were good visible signs along the way, also some information boards about the Rui sisters and resting places at some strategic posts, like at half kilometer point and 250 meters before the top. 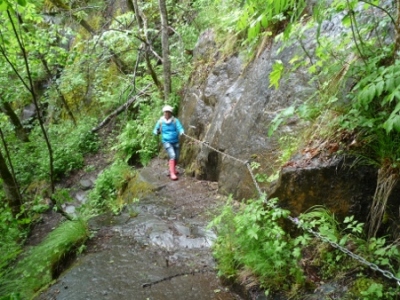 The path was between big old pine trees, some of them deeply rooted at some big boulders. After what seemed to be a one and a half  hour climb, we finally reached the farmstead. It was wonderful, serene and well-kept. The old cottage of the Rui sisters stands there with a nice picknick table outside. At the back side is a kind of mountain lodge maybe for hikers, but it was closed. The ground is nicely mowed. There are wild flowers in bloom in the praire going down to the Look-out point. From there there is a magnificent view of the Telemark Canal and the village of Dalen.

No wonder that the Rui sisters were so happy in this place; as it is surely one of the most beautiful spots one can imagine to live! It is so serene! Hans and I were alone for almost half an hour, and then came another two tourists. We enjoyed the views from here, enjoyed taking a lot of pictures, enjoyed the stillness of the place, and enjoyed the blue sky which luckily started to clear up when we were there. 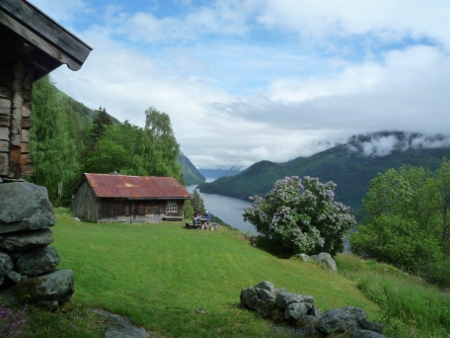 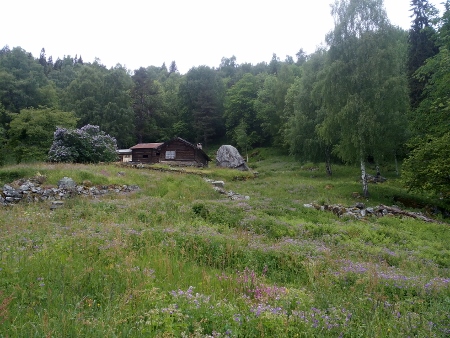 The farmstead and the old house of the Rui sisters 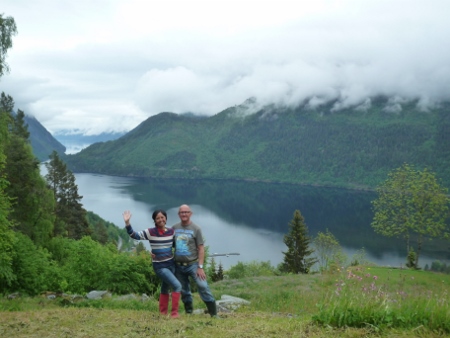 GOING BACK TO THE VILLAGE

After a while,  Hans and I planned to go down. We took a different route, following the sign to Riarhamaren. Just a short walk, then we arrived at another look-out point. But the view here was not so majestic as the first one. Continuing our trail back to the village, we came to choice between Dalen and Dalen Bryggje. Curiosity got the better of us, it was still early so we opted to take the route to Dalen Bryggje. It was a good choice, because along the way we were treated with a small creek that we had to cross. Somebody had put a bamboo drainage where water could pass and we filled our empty bottle with fresh water. 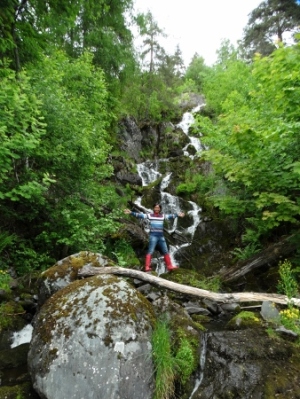 Surprise waterfalls during the hike 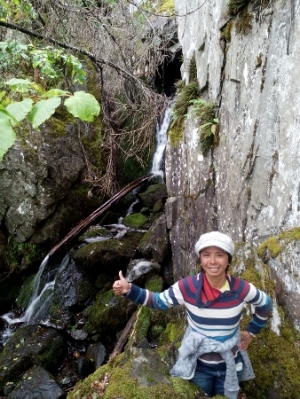 Just like the first route, the way was also narrow and steep and stony. Going further, we were again treated with another wonderful sight, this time a high waterfall middle in the mountain. It was so high and water just kept splashing down. There is a wooden pathway placed to cross the other part of the way. Of course Hans and I spent a few minutes here to admire the nature and to take some needed pictures! The rest of the way was not so steep anymore. We passed some mountain houses on the left side. Also there were lots of wild flowers again, just like in the prairie, and some apple trees. In no time we reached the main road again, just a few meters opposite the municipal building.

We were so happy we did the climb. We were not only treated with a wonderful view of the village, we saw also some nice spots like the waterfalls and the old mountain hut. Now, going on, we couldn’t find the Bryggje, so we decided to go back to the camper which was then parked opposite the tourist office. We then drove to the parking of Dalen Bryggje. Campers are allowed to park here for free during the day, but to overnight with electricity, the fee is about 150 kronen( about 18 euros). It was only 6 pm, we parked here, had some dinner, and a short walk along the waters. The ship, Henrik Ibsen, which sails along the canal was anchored at that time, so I was able to take a snapshot. At 9 pm, we drove to the parking of Coop supermarket and spent the night there. Internet was possible via Coop-giest. 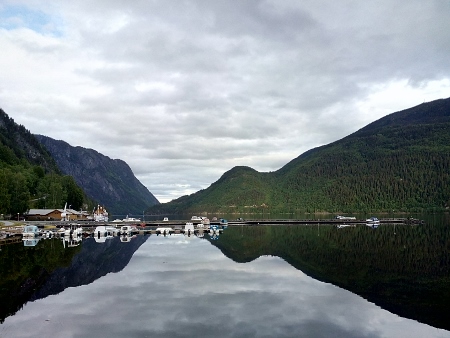 Our unexpected stop at Dalen has brought us to one of the most beautiful places in Norway. We also became acquainted to two of the most famous personages in Norway, the Rui sisters, Ingerine and Gurine. Truly, one of the advantages when one is travelling with an Rv is the flexibility to stay longer in one place.