Finally, we have arrived! After about 4 days on the road and an uneventful quiet ferry transfer from Denmark to Norway via Fjordline,  we are here! But Norway is too big! Where to start? After consulting each other, Hans and I decided to first drive inland to the province of Telemark. So we chose as our first destination, a small town called Rjukan, especially the Gaustatoppen. 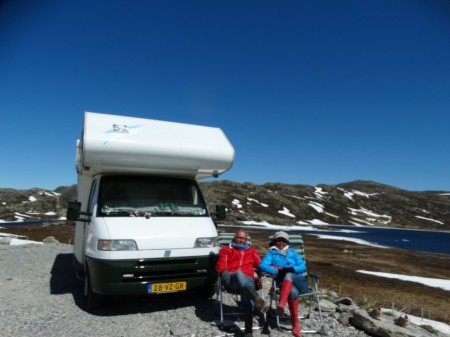 Our campsite at Gaustatoppen

It was Saturday afternoon, about 14.00  (June 13, 2015), when we left the ferry terminal in Langesund,  and after a good 4-hour drive, we reached our first planned campsite. But let me tell you about our first driving  experience. It was exciting in a sense that it was our first time and we were in a way testing the roads. After some missed turns, we came back again to the right road; then we passed varied landscapes and sceneries : from mountains and lakes right and left, downhill and uphill drive all the time. We also chanced upon one of the oldest churches in Norway, the Heddal Stavkirke in Heddal. We stopped here for a while to take a look and admire the bulding. We could see also snow-capped mountains from a distance. As we drove through, we were not noticing that we were going up, not until we took a sharp turn to the right to Tuddalsvegen. From there, it was only higher and higher, and we saw that we were nearing the snowcapped mountains we saw from afar. We were driving nearer and nearer the snow, until the roads became narrower but well accessible; and left and right, we saw snow. 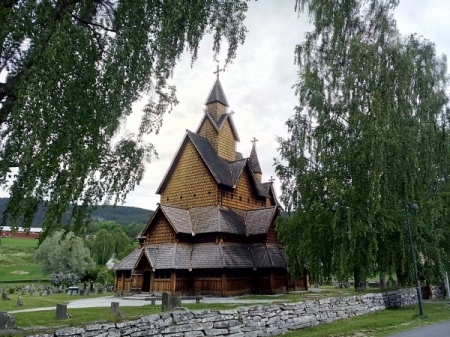 It was 6 pm when we arrived at the campsite, a big parking place along FV 651. It was situated marvellously with wonderful views of mountains and lakes and the Gaustatoppen. There are information boards over the place and the hike routes; a café which was unfortunately closed , and a functional toilet. There were guys with tents near the lake, and a Norwegian camper told us it was okay to spend a couple of days here. The first day that we were, the lake was still covered with ice. But during the next couple of days, it smelted and what appeared then was deep blue crystal clear waters.

Panoramic picture or our campsite

It was especially windy and cold during our stay here at the campsite, especially at nights, when we heard the gushing of the winds continuously.

Gaustatoppen, which is 1883 meters high, towers magestically over Rjukan. From the top, one has the Southern Norway’s broadest view, almost 1/6 of Norway. The top is easiest to reach from FV 651, and the easiest route to reach the top is via the Stavro parking where our camper is parked. From there it is just about a 2-hour hike. And from where we were camped, it looked like a short easy hike for us; but we were wrong, so very wrong! 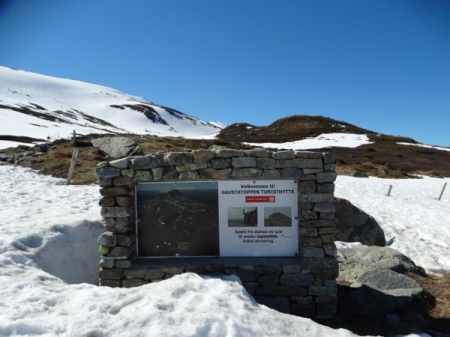 Infoboard at the starting point of the hike

Dressed heavily with warm clothes, hats and handgloves, and armed with nothing but a half liter drink, two bananas and cookies, and of course cameras, we took off to begin our easy hike. The entrance to the starting point was covered with snow, and we had to make our own way. We could see the marks (red painted letter T) on the rocks along the route. It seemed easy, all right. We passed some waters where the snow was beginning to melt. Continuing our hike, we could still see the antennae at the Gaustatoppen. Sometimes we had to walk on the snow, because there was no other way. 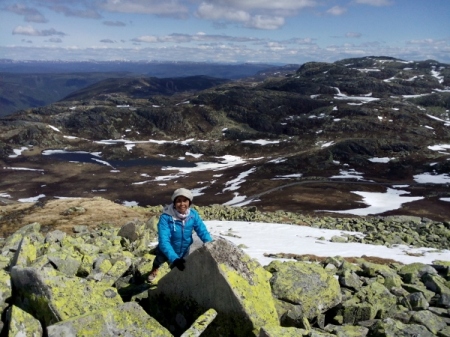 Impressions of a stony hike to the top… 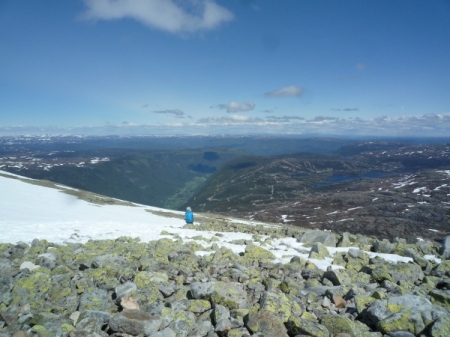 Sometimes we walked on stones which were covered with green moss. At this point we could still see the camper below us and nice view of the lakes and mountains. We got higher, and the hike became heavier. Sometimes we had to take a steep climb, which was made more difficult by the snow. Our feet would sometimes be buried about 40-50 centimeters deep in the snow and it was difficult to pull them out again. There was also a lot of falling and slipping! But we had to go on. We were already past the estimated two-hour hike and we were just more than half of the hike! At times I’d like to stop, go back and forget about it! But then, I reasoned with myself. I saw two small children, aged maybe 10 and 12. And if they could, I could do it also! The higher we went, the more beautiful the views became. 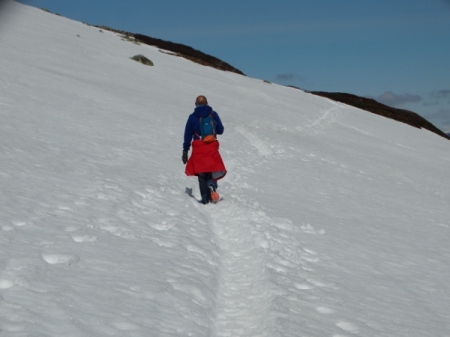 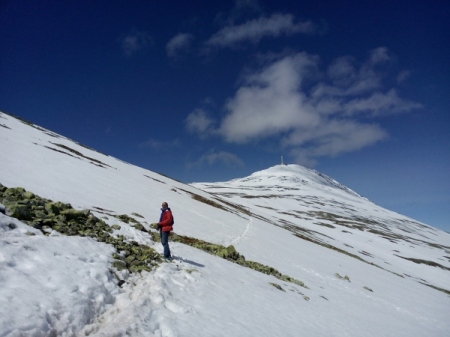 The last 500 meters, Hans could not get a word out of me anymore, because I was tired and cold and shaking. It was then that I took breaks a lot. But just what they say, Never Give Up! And we didn’t! After a 3.5 hour hike, we finally reached the top! And what was our reward??? A magnificent 360 degrees views of the whole area, almost 1/6 of Norway. Mountains after mountains, covered with snow! Lakes after lakes, some with ice, others completely deep blue in color! What a sight to behold! Wunderschön! I was glad we made it! Just being there, savouring the immense beauty of nature is already an experience! Plus the climb to get there! 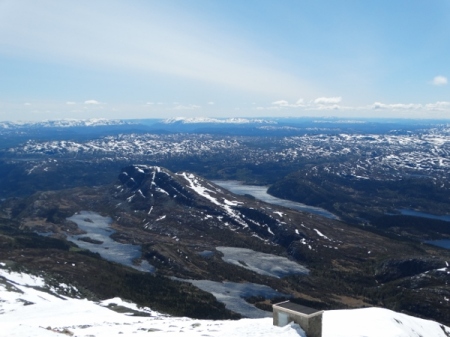 Astonishing view from the top 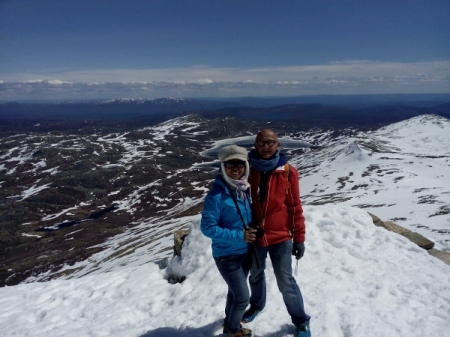 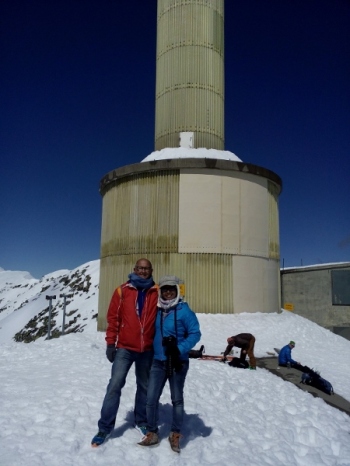 After spending  more than half an hour on top, enjoying the magnificent views around us, we decided it was time to go down. The tourist hut on top of Gaustatoppen was closed, and the Gaustabanen, a battery-powered carriage on rails that bring people up and down the top was closed for maintenance, so we had no choice but to take the same way we had in going up. The first part of the descent was steep and full of snow; so what I did was just to sit down and let myself glide down, not minding if my shoes and pants got wet. That was fun! The rest of the hike back was now easy, following the paths made by our fellow hikers, sometimes avoiding places with deep prints. This time we hardly didn’t rest at all. But we felt that it was getting colder and the wind was blowing a bit harder. I felt also that my shoes and socks were wet! And my legs were shaking, and it it looked like they had minds of their own, just taking steps after another, at times I couldn’t feel my legs! anymore.  After only 1.5 hour hike, we were again back to where we began..at the bottom…1173 meters. 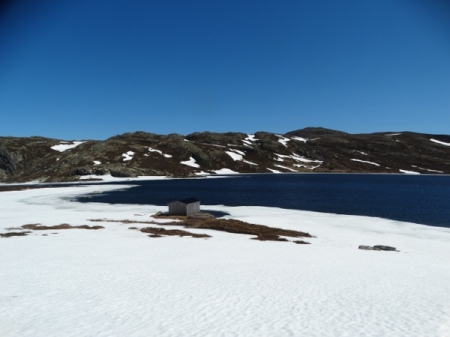 The hike to Gaustatoppen could have been easier, we thought, when it is summer and the hike routes are visible; and we wouldn’t have to walk on snow! Then it would be ideal, even for children. As such, we would like very much to return to this place in the summer when everything is green, and maybe do the hike once more! It was our first time in Norway, and our first adventure challenged our stamina immediately. Nevertheless, it was a wonderful experience for both of us…our first wonderful experience of Norway…and surely not the last…as we’ve only just begun!

How about you, have you done the Gaustatoppen hike already? Please free to share your experiences on the comment below 🙂