Back to the Middle Ages…. That’s how we felt when we drove up to Paderne and attended its annual Medieval Festival.

Paderne, a tiny inland village of Albufeira, transforms once a year to a medieval village, in honor of the village’s key part in the history of the country during the reign of King Dinis. Attending the festival was like travelling back to a totally different world. Hans and I found ourselves among locals and theatre groups dressed in medieval costumes. There were musical performances, a theatre acts, parades, tournaments, exhibitions and a medieval market.

It was a festival where King, Queen, lords, ladies, knights, magicians, witches, slaves and other medieval personalities paraded on the village’s narrow streets, reliving the spirit of the 14th century. Live acts portaying how justice was done, how blacksmith did his work, how the nobility lived and the people from this period lived were presented. 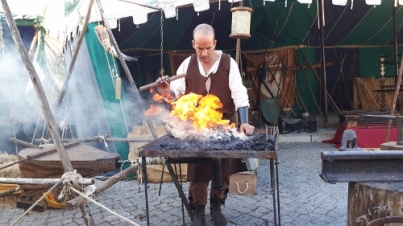 There were Moorish women dancing on the streets, witches performing their crafts, musicians parading around and even children all enjoying a ride in donkeys. Both sides of the streets were lined up with merchants selling their wares which varied from small handmade jewelries , to amulets, some medieval items. Makeshift taverns were made, selling medieval food and drinks! 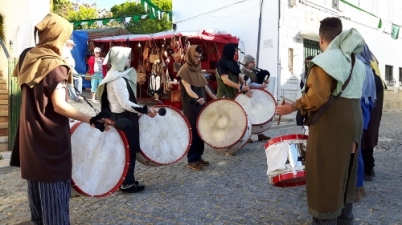 It was a very special experience for both of us. Especially for me, as I love reading stories and romance about this period. In fact, I have just finished reading the last book about King Arthur and his Excalibur, and this festival served as a kind of culmination for my reading. It has brought me right in the middle of the story! Specially spectacular were the evening entertainments where the actors and dancers performed skilfully and graciously some really tricky stunts, dances and acts!

Entry to the festival was 1.50 per person. We attended the festival for two days, December 29 and 30. We had a really great time, going back in the period which Hans loved to say “the good old times”. We had fun watching the people and taking lots of pictures.

A knight even dropped to his knees and kissed my hand! Imagine that!

The  medieval festival in Paderne got its inspiration from the castle found in the village. The Paderne Castle, which dates back to the 12th century, is located about 5 kilometers from the village center. A pleasurable walking trail runs from the village center, passing through our campsite at the Fonte de Paderne, and all the way to the castle ruins. From our campsite, it was only about 3 kilometers walk, following the river, walking under the viaduct, turning left and following the sign to the castle. If you are with a car, it is possible to park the car at the Fonte, or if you want to be nearer,  up to the parking under the viaduct. And if you feel too lazy to walk, you can even drive uphill to the ruins. 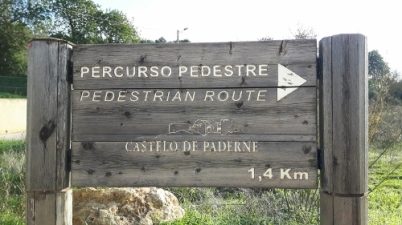 The castle has a formidable steel gate! Inside what we saw are the ruins of the Assumption Church, the living quarters, cistern and oven. The views are also beautiful from here. The old roman bridge could also be seen, as you stand from the Church ruins. 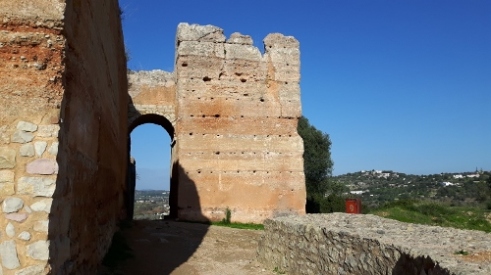 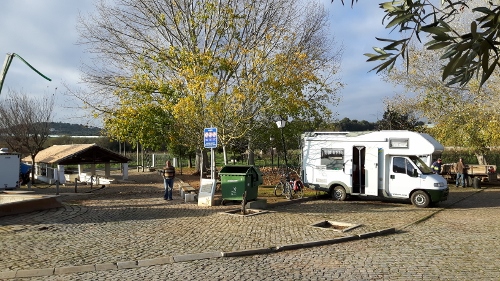 It is a free parking area at the Fonte de Paderne, where an old public washing area is also located. It is about 1 kilometer from the village center,, and 3 kilometers from the castle ruins. Ideal starting points for hiking. It is also possible to do the laundry here and tap water here just like what the locals do.