It was a rainy Monday , August 22, 2016, when we left Zakopane; thus ending our camper adventure in Poland. Our next country of destination was Czech Republic. We have been to Czech Republic  with a camper before, but that was about 12 years ago. Now, we didn’t have much idea how it was in the country with mobile homes. We were dependent only on what we have read and heard from other camper owners , saying that wild parking was not tolerated in the country and that we had to be careful here. With that in our  minds, we made our itinerary and looked for possible campings in our area of interests.

We left Zakopane at around 11.00 in the morning, drove as far as we could in reaching our target destination. Our first target destination was Jicin, which was more than 500 kilometers from Zakopane. Because it was too far and it was already getting late, we decided to stop at Hradec Kralove.  But as fate would have it, there was a heavy traffic just about 10 kilometers before we entered the town proper. So we took an alternative road, a country road which was narrow and long. Anyway, that was an exciting drive; finally we reached the camping site in the area; and that after driving for about 450 kilometers that day. We stayed here for one night. 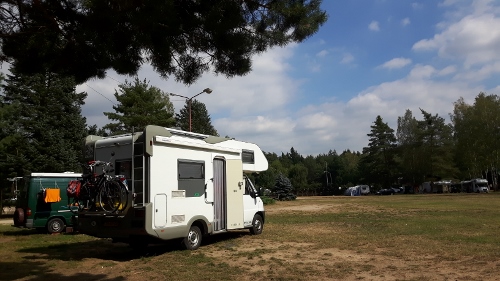 It is a big recreational and  family camping with a nice pond called the Silver Pond (Stribrny Rybnik). It has good facilities : clean and spacious shower rooms and toilets; possibility for laundry; barbeque, swimming, fishing, biking and walking. There is also a monkeypark in the area, ideal for children. Fee is 180 crowns (Kroon) per camper + 80 crowns per person. We paid a total of 340 crowns for one day. The bus stop to the city is about 1 kilometer away. Fee is 12 crowns, one way and the ride takes at least 12 minutes.

A TOUR OF HRADEC KRALOVE

Hradec Kralovy, which lies at the confluence of Elbe and Orlice Rivers , is considered the dowry town in Czech Republic. Its names Hradec (Castle) and Kralove (of the Queen) literally means Castle of the Queen. It is also known in Germany as the Koniggratz. 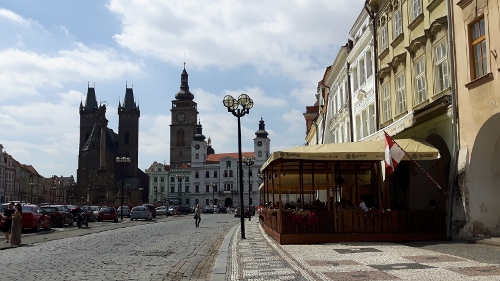 We went to the tourist office and received a map with four suggested walking tours . We started our exploration by first having our first taste of Czech’s coffee and a piece of cake. We always think the best way to start our exploration is by having a cup of coffee in a local café while studying the different pamphlets and maps we have just received. After that, our exploration began. 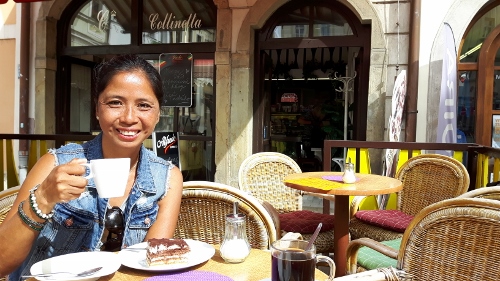 Here are our major stops during our walking tour:

This is a massive gothic cathedral probably founded by Queen Elizabeth Richeza in 1308. It has an amazing altar, authentic baptismal basin, magnificent nave and the relics of St. John Paul II. Entrance to the cathedral is free. 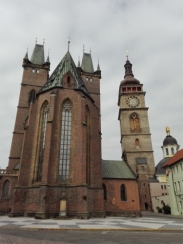 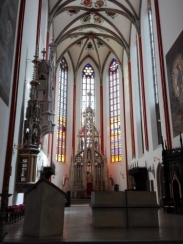 The tower, which is one of the town’s most dominating features  and houses the second largest bell in Bohemia, is 71.5 meter high and has 233 steps. Its construction began in 1574 and finished on 1589. Since then it has undergone some damages and reconstruction, the last was between 2013-2015. With its 72 meters height, it is considered the highest landmark in the city. On the way to the top, there are interactive boards and information about the tower. Entrance fee is 60 CZK crowns per person. A glass model of the tower, which is made up of more than 500 pieces of glass and weighs approximately 1000 kilograms is situated at  on the first floor of the tower.

The St. Augustine Bell, the third largest bell in Czech Republic and the second in the Bohemian region is housed at the fourth floor of the White Tower. It has  height of 169 centimeters, width of 206 centimeters and weight of nearly 8 tons.

4. Church of the Assumption of the Virgin 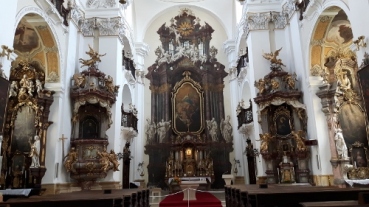 This line of colourful buildings is located beside the Cathedral, at St. John Paul’s Square.

After our short tour, Hans and I took the bus back to the camping site. That same day, we left the site and drove to our next destination, Jicin. Our initial experience in Czech Republic was not so spectacular as we have wished it to be. But, hey, we have just started. Who knows what await us still !