We had five wonderful days in Dresden. The weather was good; we have cycled a lot – both in the city center and along the Elbe river; and we have seen some quite marvellous sites and musea. We even attended a Holy Mass on a Sunday in the Cathedral. But then it was again  time to move on.

From Dresden we drove 120 kilometers to Zittau, a village strategically located on the border between three countries : Germany, Poland and Czech Republic. We camped at a special parking area for mobile homes which is located just 1.5 kilometers from the village center. 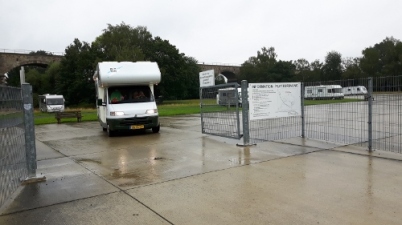 The fee is 7 euro/24 hours; the area has complete facilities for mobile homes . Water and electricity can be obtained for a small price. We stayed here on August 8, 2016.

Before we parked at the said parking area, we decided to drive first to Dielanderpunkt. We parked the D”Traveller next to the school and walked about 4 kilometers to Drielanderpunkt (We took the wrong turn and that cost us extra 2 kilometers!). It was special to be in the place where three countries meet. It was like the Drielandenpunt in  Vals in The Netherlands , where the borders between The Netherlands, Germany and Belgium are situated!  We did some picture taking and decided to do the 8-kilometer cycling trail later in the day. But this did not materialize because  the weather became worse later that day, and also the following day! 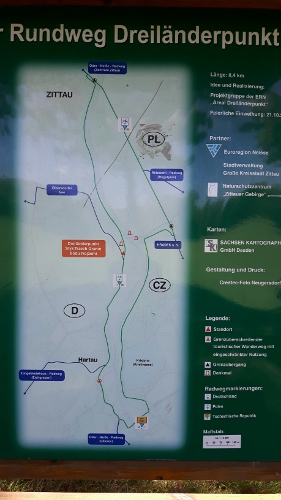 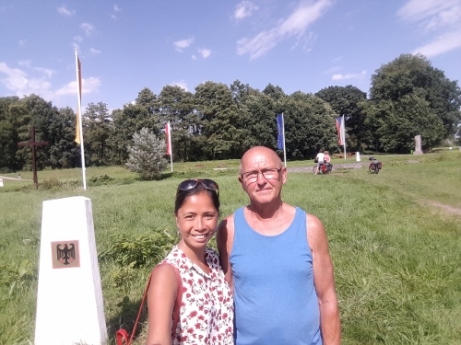 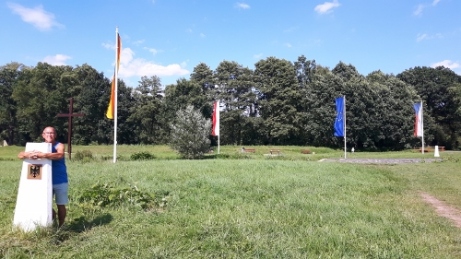 The next day, August 9, it was raining very hard and it seemed that it would not be getting any better for the rest of the day. So Hans and I tried to modify our travel plans. We then decided to drive as far as Poland, instead of going first to Czech Republic. So after cleaning up, we started our journey to Poland, a country which is unfamiliar to both of us! We were both anxious about what awaits us in Poland.  Anyway, seeing that Cracow was still more than 600 kilometers away, we decided to make a stop over in Katowice. After driving for about 6 hours and covering a distance of 450 kilometers, we finally arrived in Katowice. We have already heard from other people that  “wild parking” is not allowed in Poland and there are not so much big parking areas so we searched  for a camping in Katowice. We stayed here for one night.

Our initial experience in Poland was not a good one! We found the landscape boring, and the inner roads were quite narrow and busy! Plus, the weather during our trip also added a negative impact on this experience. 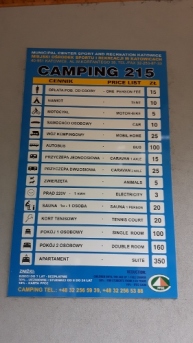 It is a nice camping with new sanitary facilities. Toilets and shower areas are spacious. There is also facility for laundry. WIFI is available, but the signal is weak! Fee is 15 zloty per person + 25 zloty per camper.  We arrived  here at 7 in the evening. We have chosen a nice spacious spot in the area. But because it has just rained, the place was quite muddy and slippery.  In fact when Hans tried to relocate the camper, the camper couldn’t leave its spot! No matter how hard Hans tried to start the motor and drive to another location, it didn’t work! We were stucked in the mud! Fortunately, another camping guest, a German, offered to help us. With his car, our camper was towed away. It was after an hour of bad experience!

Stucked in the mud!

The next day, it was still raining! Though, it didn’t stop us for wanting to see a bit of the city of Katowice. So we prepared ourselves for a day of sightseeing. But then, that didn’t push through again! The old lady at the reception of the camping happened to give us wrong information as to where the bus stop to the city was! We have walked for more than 4 kilometers in the rain, and haven’t seen any bus stop! Ironically, the bus stop was just 500 meters away from the camping; just before the bridge and then right! Irritated with our wrong start and with the bad weather, we decided to leave the campsite right then and go to our next destination. So if you asked us what we could say about the city of Katowice, then we would say. “Nothing”. 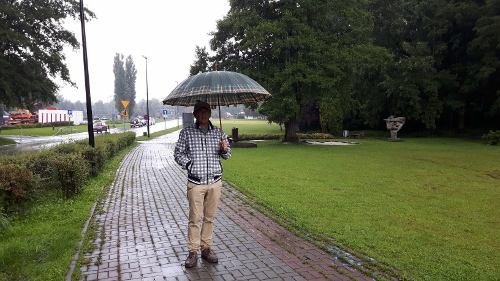 Walking in the rain in Katowice

Another problem occurred when Hans was about to pay. The camping did not accept payment in euros or card, but only cash and in zloty! Since we didn’t have Polish money yet, Hans had to pin somewhere. Again, the stupid old woman informed us that the nearest bank automatic machine was 4 kilometers away, by a gasoline station. Now, Hans just went to the big commercial center which was 2 kilometers away and got money there! Having done that, he paid for our one-night stay in the camping and then immediately drove away.

We were hoping that our bad start in Poland would in some way be overshadowed by wonderful things which we were hoping to see and experience in the country! We keep our fingers crossed!