MAGDEBURG : THE CITY OF OTTO

Magdeburg, the capital city of the Saxony –Anhalt region in Germany, is also referred to as the City of Otto. This nickname was given in honor of two famous Ottos who had made a great impact in the city’s history : the first German-Roman Emperor Otto The Great and Otto von Guericke, former Lord mayor of Magdeburg and also a great diplomat, inventor and scientist.

Magdeburg and its Cathedral

Magdeburg, which is competing for the title of European capital of Culture for 2025, is an example of a metropolitan city which boasts of having more than 1200 years of history and lots of events for cultural enhancement, shopping and relaxation opportunities.

After our quick visit to Quedlinburg, we drove immediately to Magdeburg. It was a 67-kilometer drive which we did in an hour. We parked at a big parking along the Elbe river and stayed here for four days, from July 26-29, 2016.

Our parking cost 8 euro (it seemed that one can stay here as long as he want). Facilities for clean water and chemical toilet are present; there is however, no electricity. There is  a nice view of the Elbe river and we saw the coming and going of tourboats. A beach bar is on the corner; the city is about 1.5 kilometer away; and there are nice biking routes along the river. The place was busy and a bit noisy (summer period). But for the rest, we have enjoyed our stay here. We sat a lot of time outside the camper, enjoying the views before us and also the nice weather. 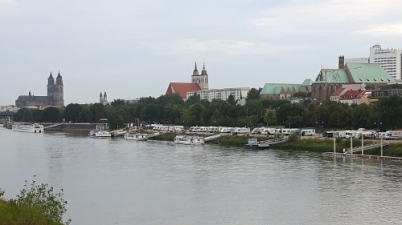 HIGHLIGHTS OF OUR MAGDEBURG VISIT

I. WALKING TOUR OF THE CITY

We obtained a nice free city map from the tourist office with recommended walking tours. We did the tours around the cathedral District and the market Area.

During our Cathedral District walking tour, we paid a visit to the Magdeburg cathedral where the tomb of Emperor Otto The Great is located. Visit of free of charge, but one has to pay 2 euro to be able to take pictures.  Infront of the Cathedral are water fountains where we had lots of fun taking pictures. And next to the cathedral is the old fort of the city, the bastion Cleve, with a big wooden diorama /map of the city. 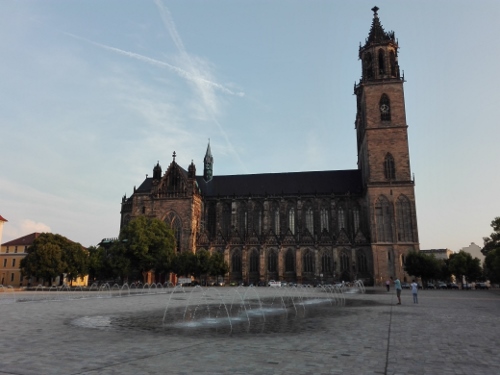 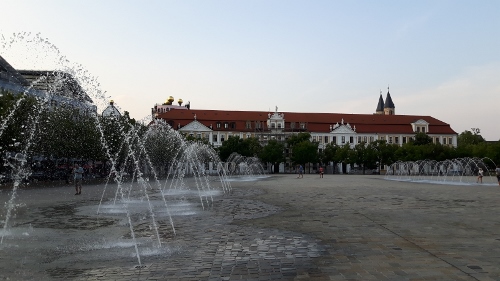 We walked and were deeply impressed by the Green Citadel, which is located just a couple of meters from the cathedral. The Green Citadel is not actually green, but pink. The pink building, designed by Austrian Hundertwasser has apartments, shops, and cafes in it. The architectural design is really one of a kind.

In the market area, we saw the old market, the Horseman statue, the Old Town Hall and the monument of Otto von Guericke. We walked along the Breiter weg, or the Magdeburg’s High street where lots of commercial buildings are found.

Hohenwarthe is a village 13 kilometers away from Magdeburg. There was a very nice biking route from the camper parking area up to Hohenwarthe, which is a part of the Elberadweg (cycling route along the Elbe river). It was raining half of the time that we were biking, but luckily it was dry from Lostan up to Hohenwarthe. We saw the amazing engineering works at the crossing from Elbe and the Middleland Canal. It was  impressive and unthinkable how the canal was built on the bridge and stands stable over the Elbe river! Really unimaginable! 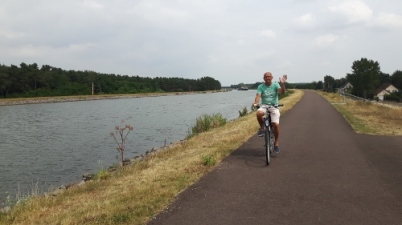 The Elbe river and Middleland  Canal

On our way back, we visited the Hohenwarthe village church. It is a very intimate small church from the 12th century. The interior was charming and nostalgic. We had a very interesting and informative conversation with the church caretaker.

Rotehorn Park is the city’s main park and a popular recreational area for the locals. It is located on the opposite side of the Elbe river and can be reached by either crossing the old Lift Bridge  (Hubbrucke) or the Sternbrucke (Star Bridge). We did both! First, we made a nice picture taking session at the old wooden swing found under the Lift Bridge, offering an spectacular view of the Elbe and the Cathedral. 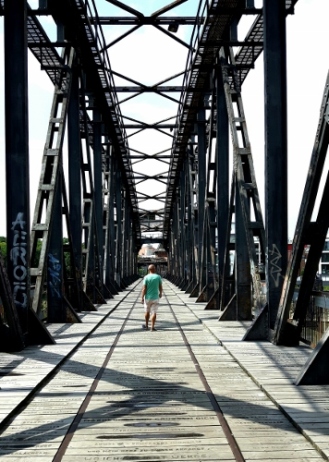 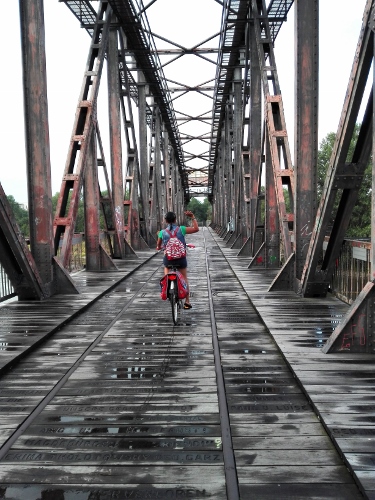 Views of the Lift Bridge

Afterwards, we biked to the Park. We spent quite a long time at Adolf-mittag See watching some people rowing some rented boats. We wanted to do the same but unluckily, we didn’t have enough time. It was however, pure relaxing afternoon! 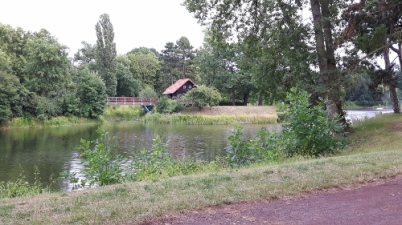 The park which has an area of about 200 hectares, has a good cycling path and it has some of those nice secret spots where people can take a rest and just enjoy from the tranquillity and serenity of the surroundings. We were fortunate to have found such a place, by the river, where we watched some boats sailed by!

After relaxing, we biked back to our camper by crossing the SternBrucke.