After travelling around Norway for a little less than 8 weeks now and having done quite a number of hikes already, the time was approaching that we had to head back to Holland. Sad, but true… But not before doing one more hike! There were still two hikes on our list : the Galdhoppigen, Norway’s highest mountain, or the Besseggen, one of the popular hikes in Norway. Because they were on opposite directions, we had to choose one. And that was……The Besseggen Hike!

Besseggen is located in Northern Norway and part of the Jotunheimen National Park. It is one of the most popular hikes in Norway that they say almost 300,000 people do this hike every year, and that every Norwegian have done this hike at least once in their lifetime How true is, I don’t know J I’ve seen pictures of the hikes and what I’ve seen has motivated and convinced me to do this hike as well. The hike is about 10 km long which is doable in 5-6 hours. After acquiring some information about this hike via internet and some people (they’ve run out of info brochure over this hike at the tourist office in Lom, which only showed that the hike was really popular), Hans and I were ready to go!

Coming from Lom, we drove to Rv 51 to go to Gjendesheim, where the hike should begin. It was a short 1.5 hour drive, passing through a not so wide quiet road. It was about 5 pm when we reached the big parking area at Gjendesheim. Dayparking cost 100 NOK. From here there is a shuttle bus that brings hikers to the ferry terminal. We drove a bit further, about 2 km and arrived at Gjendesheim tourist hut where the ferry to Memurubu also departs. There is also possibility to park here, but the price is also 100 NOK per day. As it was already late, we decided to drive back a bit, along the main road and tried to find a place where we could park for the night and do the hike the next day. We did find a parking, but it was just along the road, a small parking area. We spent the rest of the day here, preparing ourselves for the big hike the following day. There were also 3 other cars which parked here for the night.

The following day, August 9, 2015, we had an early begin at 9:30. But it was not early enough, because when we arrived at the parking by the ferry, it was already full and the vehicles had to park in a big open place about 1.5 km from the ferry, paying the same amount of parking fee. From there, a shuttle bus brought the hikes from the parking area up to the ferry terminal.

There are two recommended ways in doing the Besseggen Ridge hike. First is to take the boat from Gjendesheim to Memurubu and hike the Besseggen on the way back. Second way is the other way round…do the hike first and then take the boat from Memurubu on the way back. Ferry costs 140 NOK one way. Either way has its disadvantage. First is the extra cost of 280 NOK (about 40 euros) for us both. Second, if you take the boat first, chances are you begin the hike from Memurubu together with lots of other hikers who also take the boat first. And if you decide to first hike, then you have to watch your time to be able to catch the ferry in Memurubu. As we wouldn’t want to have extra expenses anymore, we opted for another way: to hike the Besseggen beginning from the parking, up to the “Strip”where the colors of the lake is good to be seen, and then hike back again to the parking. In this way, we would not only be saving the needed euros, we could also hike in our own tempo, not worrying about catching the boat back. Smart he J But we were not the only ones who did the same thing. In fact, many hikers had the same idea also and we saw them all doing the same way we did. 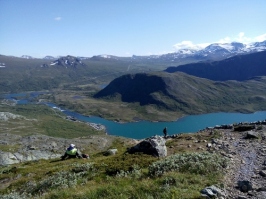 9.30 was not early enough as we saw when we arrived at the parking area. With a result that we had to park somewhere, and took the shuttle bus up to the starting point of the hike. It was incredible to see how busy it was that day. It was Sunday and the weather was really good. Understandably that it was very busy. The line was long by the ferry terminal.

The start of the hike was immediately steep. What good was, the route was good signposted. There was a wooden signpost at the beginning, and further were red painted marks on the rocks. We passed some hikers along the way who spent the night by at the tents. During the first part of the hike, we walked thru a vegetated areas, with shrubs and plants all over the place. There were also some interesting mountain wildflowers along the way. And how higher we got, how more the beautiful the view was. We had the stunning view of the Gjende lake which at this time of the day was nice green in color. Also , we witnessed the coming and going of ferry boats  and could still see the long queue by the ferry terminal. After about an hour hike, it was time for the first stop…coffee!  And after another half hour, again…coffee. This time we took it at a much higher ground and in between snows!  At this point, the vegetation became scarce, and from then on, we walked only on rocky and stony areas. There were parts which were really dangerous, steep and glad that we had to hold on to some chains -feeling Cliffhanger (if you’ve seen that movie). 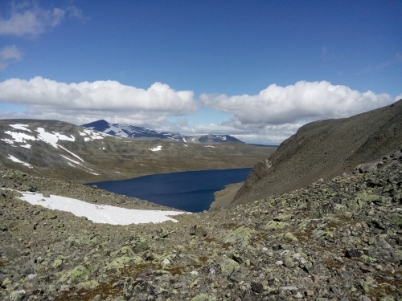 After that first steep part, it was just a bit of climbing up and down on rocky road. It was getting late, and it was getting a lot busier. Hikers came from both directions…Gjendesheim and Memurubu. All the time, we were blessed with wonderful views of the lakes, mountain peaks and the road far below. There was a part where we had to walk across snow, but that was not a problem. After about 3 hour hike, with lots of stops, we reached the highest point of the hike : Veslefjell, which is 1743 meters above sea level. Here is the highest cairn, or heaps of piled stones which serves as boundary or landmark, in the whole of Norway.  Hans and I stayed here for a while to have our lunch and also for some picture taking. 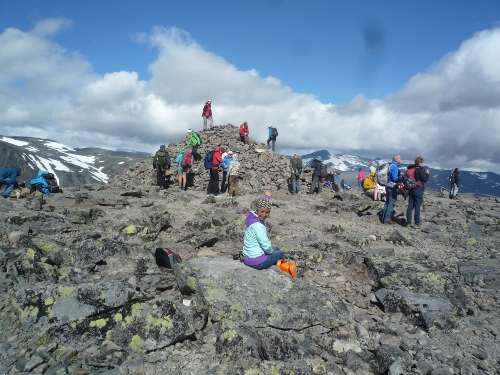 After our short rest, it was again time to hike on. Having reached the highest point, it was now only climbing down, which made the hike at this point a little easier. It was getting chilly; though the sun was shining, there was this cold wind that was blowing up here in the mountains! It was also getting a lot busier than before. Hikers looked like ants as they climbed up and down the mountains. Children and adults alike seemed not to mind the difficult hike. Everyone was enjoying, and so we were! 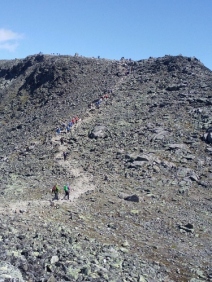 After another hour, we finally reached the point where we had the magnificent view of the two lakes with their constrasting colors : the Gjende and the Bessvatnet lakes!  From where we stood, we had the majestic view of these two lakes. The GJENDE LAKE which is approximately 20 kilometers long and 1 kilometer  wide and climbs to nearly 1300 meters above the lake surface. From this point is the lake at 984 meters altitude.  With its 150 meters depth, it is considered the deepest lake in Jotunheimen park. Its bluegreen color  is caused by washing of many fine glacial particles which reflect the daylight.  On the other side, there is the BESSVATNET LAKE, which is situated at an elevation of 1374 meters above sea level.  The lake is 7 kilometer  long and 120 meters deep and considered the cleanest lake in Norway. It has a deep blue color, in contrast to Gjende’s bluegreen.

Between these two breathtaking lakes is a “Strip”, a ridge which prevents Bessvatnet from running down into Gjende. It was cold out here, but I didn’t mind it at all. For a long moment, I just sat there, absorbing the beauty infront of us; couldn’t believe that what I saw on pictures was now just infront of me. It was indescribable! To see such beauty of creation! All the difficulty and tiredness of the hike disappeared.  Hans and I were in a bit quiet place of the ridge, and there was also a young Norwegian couple there. I volunteered to take their pictures, and they , ours. What happened next was a kind of photo sessions, with each taking turns to photograph and be photographed. 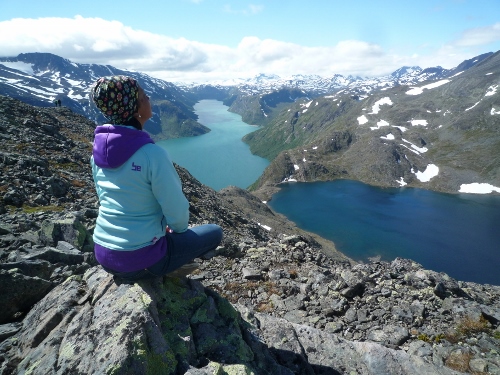 SPECIAL ENCOUNTER WITH THE REINDEERS

After taking some more pictures, rest and eating, we decided to hike back. We did not climb down any further, as the view would not be any more beautiful that what we have already seen from this point. It was already 3 pm and still many hikers were still on their way. I also saw quite a number of fellow Filipinos hiking. And I stopped to have a chat with a couple of them. While we were chatting, we suddenly saw a big group of reindeers walking not so far from where we were. Amazing! That was a great surprise for us! We immediately ran to where the reindeers were! Unbelievable! We just could stand very close to them.

There were at least 20 of them, just walking there and looking for some food! That was an extra bonus in this wonderful hike! For almost two months, we were hoping to see even just one reindeer; and here we were, our wish was granted with not only one reindeer, but at least 20! We spent the a long time, just watching the reindeers do their thing…walking and eating…we took many pictures and made many short films. We just couldn’t get enough. I for my part even followed some of them as they walked away.  Who could imagine that, that in our last hike, we would be rewarded with this experience! 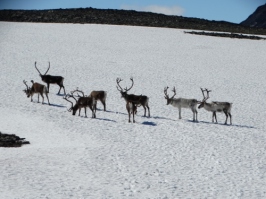 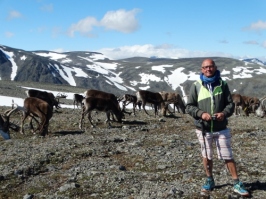 It was getting busy and the reindeers had enough of this disturbance that they left and went further from us human… Hans and I said goodbye to other Pinoys and we continued our hike back to the parking. Even though we took the same way, it was not boring, as we always had the magnificent views of the lakes and mountains. After a good 3 hours, we were back from where we started…the parking area. It was 6 pm. We were so tired, but we were contented and proud. What a memorable last hike in our two months adventure in Norway.

We drove at least 5 kilometers further until we saw a very nice parking area in Oystre Slidre. There we decide to camp for the night and rest our tired bodies. It was a big parking area with views of the mountains and not far from it was a river, where Hans fetched some water for us. It was also popular place for hikers for setting up their tents here. The weather was still good and we were still able to have our dinner outside in a picnic table. What a good way to end a wonderful day! 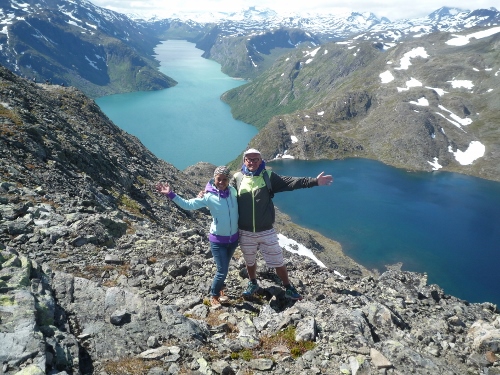