As much as we wanted to stay longer in Godoya, we couldnt! Time was again our enemy! So we drove back to the neighbouring islands of Giske, Valderoya and Vigra, all connected To Godoya thru bridges and sub-sea tunnels. We just drove thru Giske, as it was not so special for us. We then drove to Valderoya and found the starting point for the hike to the mountain.

Valderoyfjellet, the Mountain of Valderoy is approximately two hours walk from the parking over the mountain and back to the car. Its highest peak is at Signalen, which is 232 meters high. At the beginning of the trail was a kind of mailbox with information leaflets over the hike and Valderoy cultural trail. We picked one and tried to follow this as much as possible. In the end, we just followed our good common sense and walked on some logical path especially on the mountains. 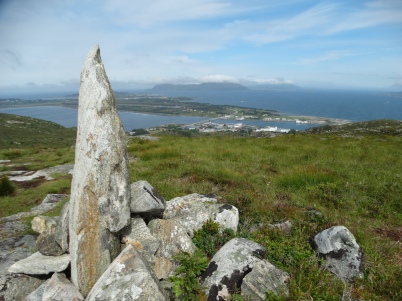 The first part of the trail was a relatively easy one. We walked on cycle and walking paths, which runs parallel to the main road. What was a great surprise in this walk was the SKJONGHELLAREN (Skjong Cave)! It is said to be one of the most famous caves along the Norwegian coast. The cave has been made by large waves which found a crack in the rock and they worked their way inwards, inch by inch. The opening is about 38 meters high and the cave extends 140 meters into the mountain. Evidences have been found that early human beings have lived in the cave in the past and many remains of birds have also been found here. The cave was really impressive! You could even go as far as half into the cave. It was just too bad that we didn’t have any flashlights with us, as the way into the cave was too dark, wet and even slippery. Plus, the path was too low, that you had to really bend your body in order to fit in! A fellow tourist has lent us her flashlight, but it was not enough, so we just returned after crawling in for about 5 meters! 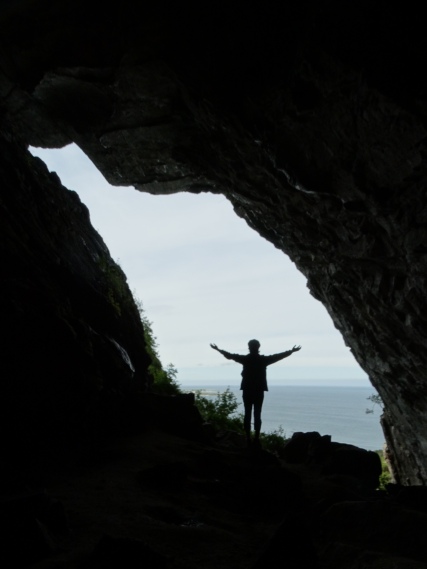 The rest of the hike was just like some of our hikes before : the paths being muddy and steep. There were no red marks here; just several paths that have been walked on. It was after 2.5 hours that we reached Signalen, the highest point of the mountain. On top was the usual mailbox with name register, where we signed our names again.  It was quite busy that Sunday, the weather was fine. The two picnic tables by the peak were occupied, so we just sat elsewhere where we could enjoy the views. 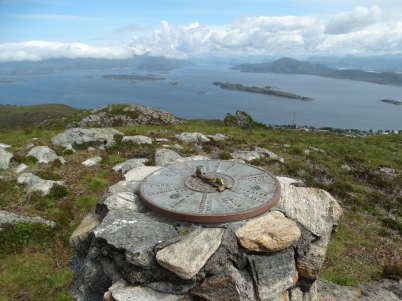 After less than an hour, we decided to hike down, following the path on the other side of the mountain. We came across the nice young lady who was working in the Joker supermarket whom we had a nice chat before. And up in the mountain, we had another nice chat with her, together with a couple of young Norwegian men.  After  an hour, we were finally back to the camper. We then drove back to Godoya, which was our campbase, spent the rest of the day fishing, with success!

On Monday, we drove up to Vigra. It is the fourth island in the Giske community, and the biggest too. We just drove around the island, from Roald to Molnes to Blindheim. In Molnes, there was a good parking area, and a good starting point for a short walk on the mountains of Molnesfjellet. The highest peak at Molnesfjellet was about 120 meters high. From the parking area, the peak was already very visible. A path led us to the top, following a dirt road, passing thru a part of the coast. From the coast, there were several paths to choose from. We chose to go up to the peak, and come down along the coast. The climb up was really steep. Surprisingly, we came a lot of people running up and down to the peak, and used it as a training or something. 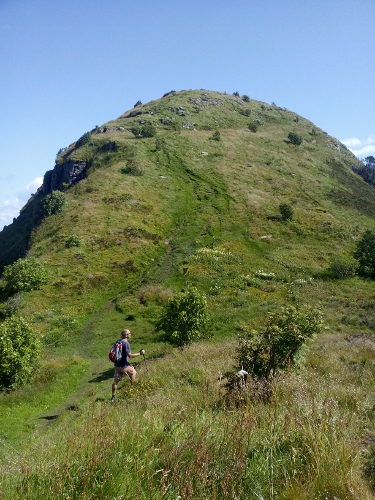 It was just a little over 20 minutes when Hans and I reached the top! Easy! The top offered us the view of the sea, the village of Roald, the islands of Giske, Valderoy and Godoya. It was chilly up here and lots of wind. Again, we signed the book registry, which was already 10 years old! Going down, we tried to go via the coastline, as planned. We walked thru the mountains, then op one moment, turned left, at the somewhat difficult to recognize path, where many cows are lazying around. Hans opened the rope gate and walked in the area where the cows were. But I was too afraid to follow him, because one of the big bull was looking strangely at me and I was afraid that he was going to attack me. So I walked in the middle of long grasses, about 200 meters outside the fence and tried to cross the fence, but then all the cows went in my side again! No choice but to go back to the same fence, went inside it and walked hurriedly, praying that the damned cows stayed put where they were! And they did!

The stroll along the Molnes Natural Reserve, along the coast was a bit refreshing. Walking thru some vegetation with many wild flowers and yes, the cows! And along the coast with its many coastal inlets with sandy shores and clear, sometimes, green waters! The waves were splashing violently at the rocks on the shore! 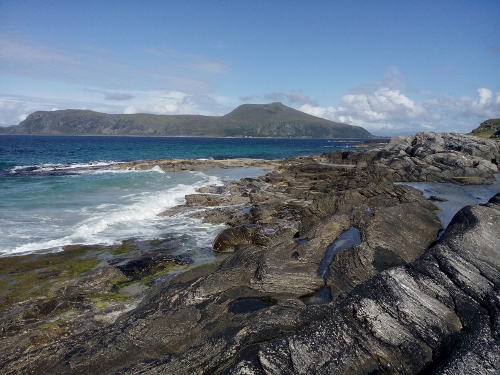 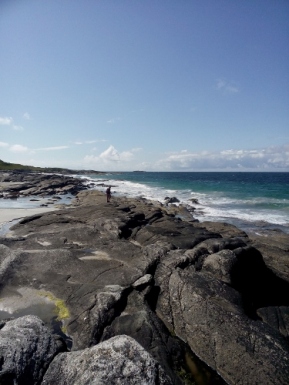 After a good 2.5 hours, we were back again at the car park. We drove to Blindsheim, by the beach, planning to stay the night there. But upon arriving there, it was a nice sandy beach, but it was also very windy and a bit busy with day surfers. So we drove back again to Godoya island, which at this point has become our favourite getaway in Giske. We spent the rest of the day here fishing again, and Hans caught a really huge fish here!  What a good way to end the day, and our stay in the islands… Next, back to fjords and mountains…. 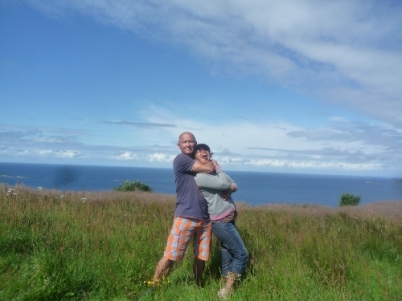