We arrived in the City of Bergen driving over the 1.3 km long Hardanger bridge and then thru National Tourist Route R 7, which consisted of long narrow and winding road, some parts are too narrow that only one vehicle could pass thru. We stayed two days in Bergen, we parked our camper just outside the fence at Bergsehallen, for free. Camping/Parking the fence of Bergsehallen cost 150 NOK per day, including water and electricity. The bus/tram to the city center is about 15-20 minutes ride; fare is 35 NOK one way. For seniors is 18 NOK. Tickets can be bought at the station, or any Navesen stores or 7-eleven.We stayed in Bergen for two days, July 14-15, 2016. 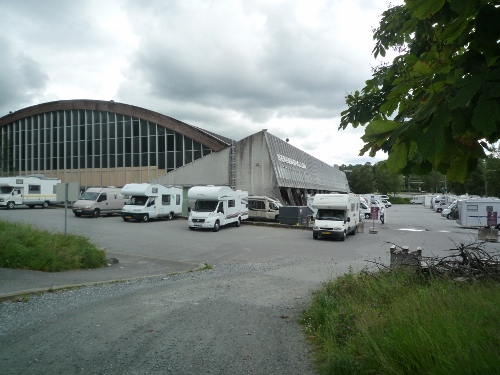 The very first buildings in Bergen were built alongside the wharf called Bryggen. It has been ravaged by many fires, particularly that of 1702. Bryggen was rebuilt on the foundations that had been there since 11th century. Bryggen is now part of cultural heritage and is inscribed in UNESCO’s World Heritage List.

Hans and I strolled Bryggen and the rest of Bergen center one cold cloudy Wednesday afternoon. We first went to the tourist office which is located at the second floor of the Fish Marker building. The office is open from 9-22.00. From there, we walked to the wharfside, where open market is held everyday, selling fresh seafoods like salmon, cod fish, trout, crabds, shrimps and mussels. 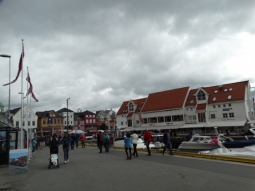 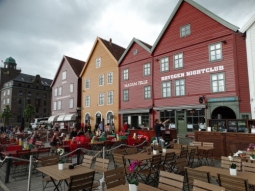 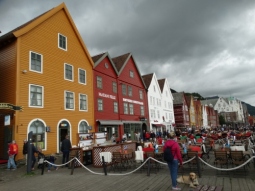 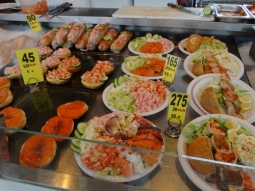 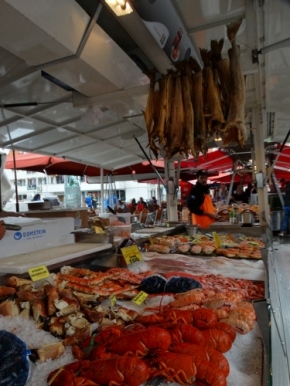 One can also order some sea products and let the vendors cook them. It smells good in this area, with the aroma of freshly cooked fish, fried and grilled. We were almost tempted to sit and order, but the ridiculous high prices prevented us from doing so. Imagine paying 30 euro for a plate of chips with salad and sea fruits; or half bread filled with cocktail shrimps, or cup of fish soup of the day for 9 euro! No ,thank you! We just contented ourselves   from looking around, taking some pictures and smelling the very good aroma . 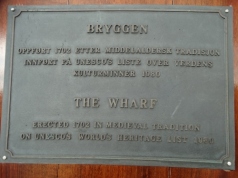 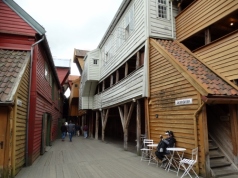 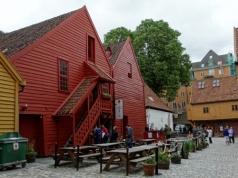 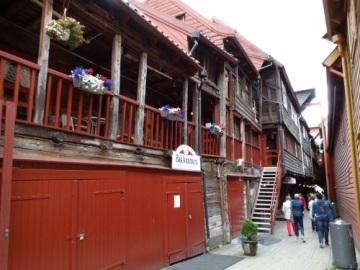 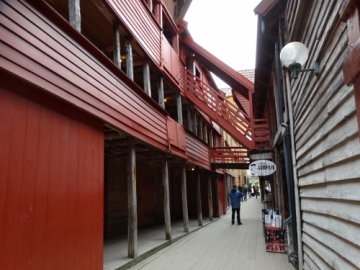 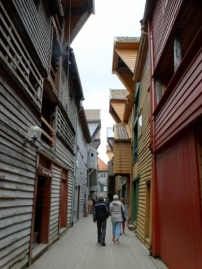 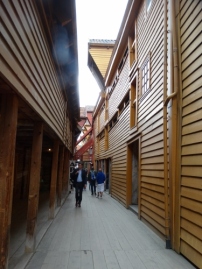 From the market, we walked thru the old part of the city, the Bryggen. Along the road are brightly colored buildings which served as restaurants and shops. Going thru the small alleys, we found ourselves walking along wooden grounds, with left and right old wooden buildings around us. The construction was really different, apart, and old. The old beams hang just like they’ve been always there! The old quarters are now homes to various shops that sell traditional crafts and souvenirs , galleries , cafes and restaurants. There are a few museums in between, but we did not enter any of them, as we did not want to do any extra expenses. 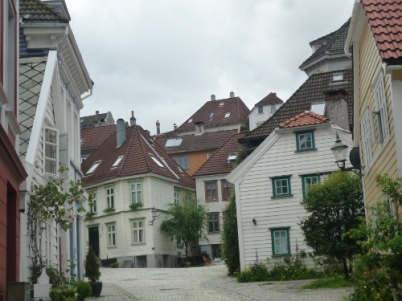 Aside from the Bryggen, we also visited a couple of churches, the Maria church and St. John’s church. But unfortunately both were closed at the times that we were there. We also did a stroll around the Bergenhus Fortress, one of the oldest and preserved fortress in Norway, located just a few meters from Bryggen.

THE HIKE TO FLOYEN MOUNTAIN

Bergen, allegedly got its name because it is situated between mountains, “Bergen” in Norwegian, the same as in Holland. The city has seven mountain tops and two of the most famous are Ulrikken and Floyen, which are both accessible thru furnicular and a cable cars. 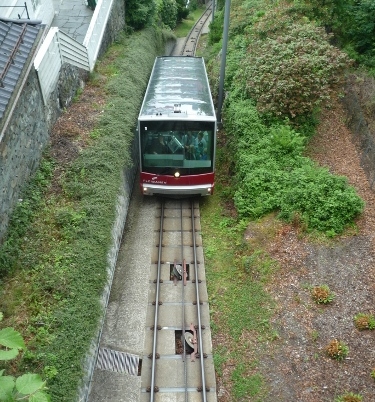 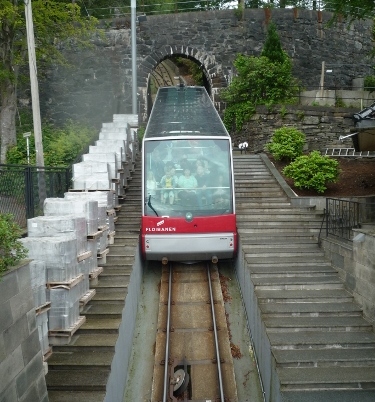 The furnicular ride up to Floyen mountain costs 85 NOK retour, and takes about 7 minutes. Considering that the mountain is not that high : 320 meter high, (we have hiked to higher mountains before), we decided to hike up to it, starting from the lower station of the Floibanen Furnicular, thus saving us 20 euros this day. The hike took us 1 hour, following concrete road and a bit of gravel road. Sometimes Hans and I tried to cut the path by walking on hidden not normal paths. The hike was quite steep, but well reasonably ok. We ended up by Skomakerdiket lake, a small lake about 800 meters from the viewpoint in Floyen. We rode in a canoe here for free for 15 minutes. After that we had a stroll around the lake, then proceeded to the Floyen viewpoint. It was very busy by the time we were here, at about 12 pm. Many tourists, especially Japanese and Koreans (in the city center also, by the way). 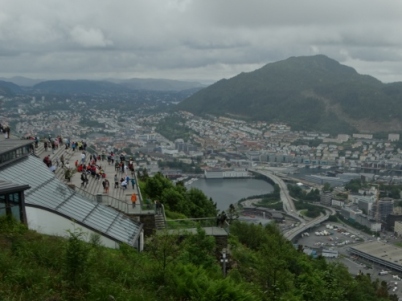 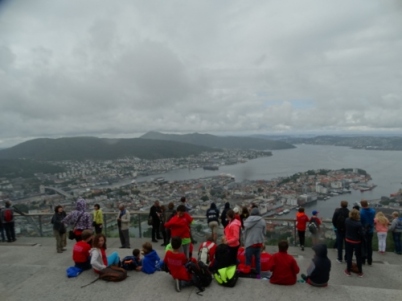 Tough a bit cloudy, the viewpoint was crowded. From here we had a magnificent view of the city of Bergen, really a panoramic view. It’s Bergen at our Feet. Just a pity that it was cloudy. After staying more than half an hour, it was again time to hike down. It was beginning to rain at that time, so we must hurry. At the time we reached the center again, after again an hour hike down, it was already raining.  We waited fort he rain to stop at the tourist office. After a while, at 3.30, it stopped. We then had a stroll around the center, visiting St. John’s Church which was closed; and trying to find the cathedral, which we didn’t.  At 5 pm, our adventure in Bergen was over. We took the tram again back to the camper, and spent  the rest of the day in a quiet and relaxed way. 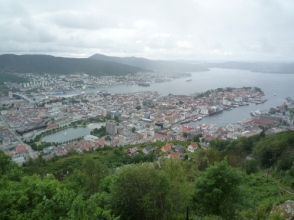 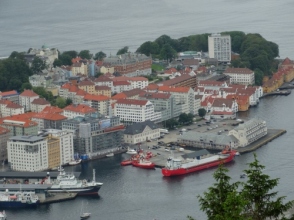 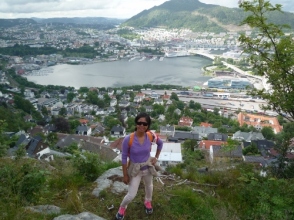 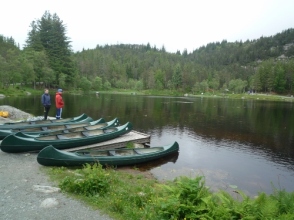 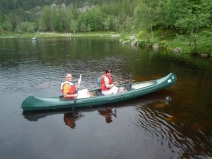 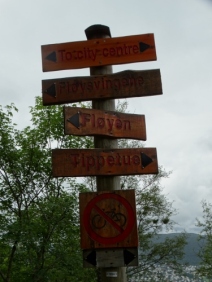 To sum it up, Hans and I have different views regarding Bergen. It is like Volendam in Holland, but then bigger. It is a nice charming city, made more charming by its old area; a city though big, feels small thus giving it a cozy safe atmosphere and feeling. I like Bergen, but Hans doesn’t. It is too touristic for him, which was made worse by the high prices in the city and the presence of too many Japanese and Korean tourists. Where can you find one simple soft ice for 5 euro? Only in Bergen! 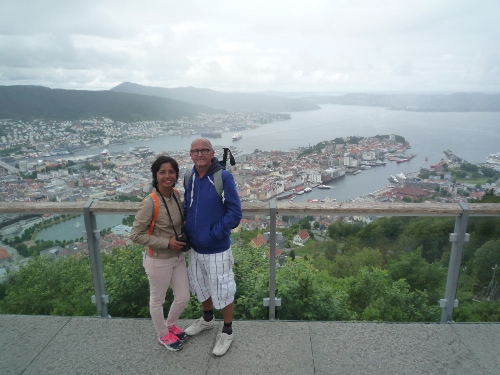 Our customary picture together at Mt. Floyen