Coming from Odda, Hans and I drove further to Kinsarvik, after having a short visit to Hydro Power Station in Tyssedal. Our plan to do the long hike to Troltunga is still being considered at this point. Anyway, we arrived at Kinsarvik, after almost 50 km drive thru a long and winding road R 13. Around 4 pm (july 11, 2015) , Friday, we arrived in Kinsarvik. We first tried to camp near the ferry , but it was not allowed to park there. Just about 200 meters before the village, opposite the tank station was an open area, by the fjord. We camped here for the next two days. The first night was quiet, with only one fellow Dutch camper owner. The second night was somewhat full. It was a nice weather, so I was again able to do a little laundry. And we had bbq!

Our campsite and the surroundings

Our campsite and the surroundings

The Huse valley leads from Kinsarvik and up to Handangervida National Park. The valley offers 4 magnificent waterfalls : Tveitafossen at 200 m high, Nyastolsfossen at 400 m high, Nykkesoyfossen at 600 m high and Sotefossen at 900 m high. All the four waterfalls could be reached within 3 hours of walking. I bought the hiking map at the tourist office for 5 NOK. Hans and I did this wonderful tiring hike on July 11, Saturday, the day we had our 12.5 year wedding anniversary! 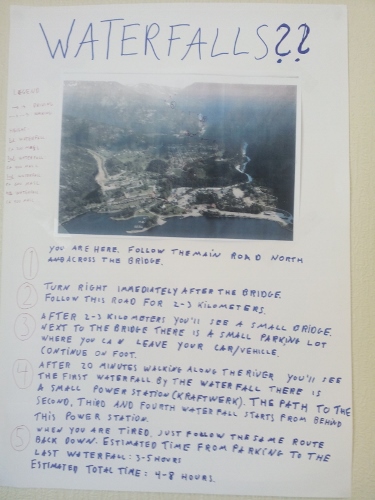 At 10.30 in the morning, we headed to the parking area where the hike should begin. From the center of Kinsarvik, we turned right immediately after crossing the bridge; then drove thru the narrow road for about 2-3 kilometers. At the end was a bridge. On the left side was a parking area. At 10.30, it was already almost full with cars and about 4 campers. It was possible to drive thru to the nearby power station, but it was not advisable because of the narrow road. Anyway, after having a short chat with a fellow Dutch hiker, we crossed the bridge across the Vivippo river, followed the tractor road, passed a small landing area for airlift helicopters, saw a closed hanging bridge along the way and after about 20 minutes walk, we reached the first waterfall, the Tveitafossen. 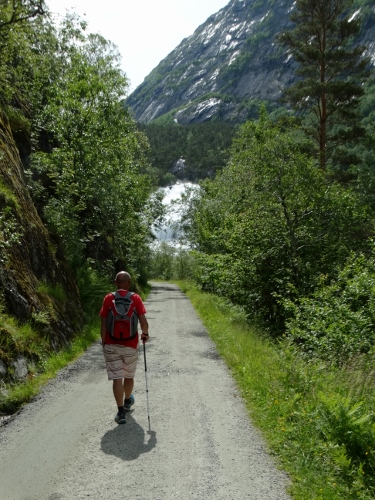 Hans on the way to the first waterfall

It is just beside the Kinsarvik Power station. There was a kind of sight seeing platform protected by a railing just in front of the cascading falls. The waters was again violently splashing down to the river, making us wet through its outbursts. After a brief sightseeing and picture taking, we continued our hike. There were two possible ways : to hike along the old water pipe by the falls, or walk thru the old hikers path. We opted to hike along the old long pipe, as it gave us a closer experience with the waterfalls. It was a rather steep and muddy hike, however. We followed the pipe all the way up until its end, which was also a nice resting place as it was a bit flat and there was a kind of lake, before the water cascades down again. Here we had a short break, just sitting and enjoying the scenery before us.

Viewing platform by the waterfalls

We continued our hike, it was getting busy with other hikers. The hike was also becoming a bit difficult as we had to walk on narrow paths again, and also some are slippery. It was after a good one hour when we caught sight of the second waterfall, the Nyastolfossen waterfall. Just like the first one, it was again a violent one, we could clearly see the water sprays coming from the falls, and at about 50 meters distance, we were easily got wet by the sprays; which made the paths also wet and slippery.

The Nyostolfossen, at 400 m height

Me and the falls

Again, after making the needed pictures, we continued on with our hike, the paths becoming more difficult. Lots of slippery parts and stones and muddy areas. The red-painted marks were also scarce. It was careful walking, most of the times uphill. We were glad when we reached a point where we could at least walk a bit, and that is after another 45 minutes hike, until we saw a big clearing with a couple of cabins and toilet. And there was also our third waterfall, the Nykkesoyfossen. It was a better, calmer sight than the last two waterfalls, but not less impressive! The falls was a bit far, its water outbursts doesn’t reach you. The waters rush down to the river, and from the clearing, we had a magnificent view of the falls and the flowing river. Here we saw the youngest hiker ever, a 5-month old baby girl hiking with her parents. Imagine that!

Now , on to the last waterfall. Would we make it? We were already busy for more than 2 hours , and we were becoming tired. But one more, and we have it! So we did go on. The last part was tiring and confusing. The red paints were hardly visible, it was as if the hiking association had no more red paints left! We had to really search for them, sometimes missing a path or two. After a while, about 30 minutes, we came to a very wide clearing again, with nice view of the valley and the river, and from a distance, the last waterfalls. But how do we got here? 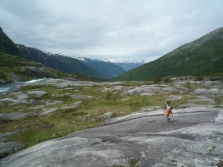 The marks are gone at this point. And we saw hiker coming from different directions: some from the river banks, others from the hills, and some at the left side of the trail. We decided to just keep an eye on the last waterfalls, and tried to find the shortest way possible. We came across two young Dutch couple from the other end of a small hill. We went on their side of the hill, and they, on our side, meeting together in the middle. And having done that, just behind the little stone hill, we had the sight of our last waterfall : the Sotefossen. It was again a marvellous sight! A sight we could enjoy without getting wet. We spent quite a long time here, admiring the view of the waterfalls with its surrounding mountains which at this time had still lots of snow! We also did a lot of picture taking, that in one moment Hans had enough of it all, and just left me at the last waterfall.. Ha ha ha I couldn’t careless. I was having fun! 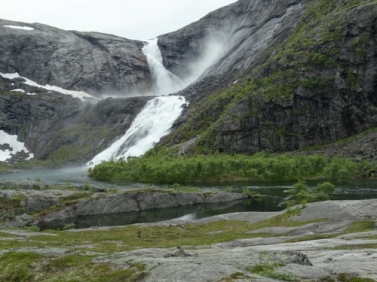 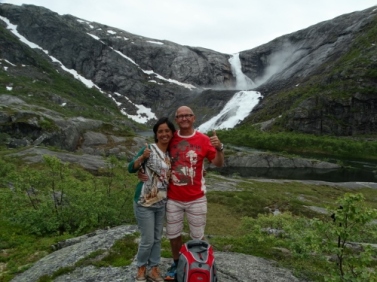 We made it again!

It was 3 pm when Hans and I began our hike down together again. It was easier now, as always. Along the way, we saw familiar faces whom we have already seen during our previous hikes. One English couple we saw during our hike in Hellandsnuten In Sand who heard me singing during the hike in the forest. It was a surprising encounter, and maybe we see them again somewhere in the North. And another was the two young Dutch couple whom we saw in our hike to Langfoss waterfalls. We learned that they have just done the Troltunga the previous day. Hearing their experiences made us considering going back to Odda and do the hike, if the weather conditions permit us. 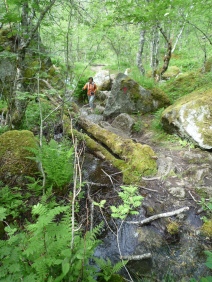 Views during the hike

It was around 17.00 when we reached the parking area. This time we followed the tractor road from the end of the pipe down near the first waterfalls. We then drove back to the parking in Kinsarvik. After resting, we had a sumptuous anniversary dinner of roasted chicken with mashed potato and red cabbage! Nothing beats a quiet simple dinner shared with the person you love!