After a hike to the top of Langfoss waterfalls which was made more difficult because of the rains and slippery paths, we drove that same day to Odda.  It was just about 40 kilometers drive, but a very exciting one. We were back at Road 13, the Hardanger Tourist Route, and as usual, it was again a long, winding and narrow road. It was very spectacular : on the left side we had the views of many long rivers whose waters were flowing so harshly; every now and then, we saw waterfalls from afar. And on the right side, was the mountains, sometimes we had to drive too close to the edge, in my opinion, that I was holding my breath and praying that the camper did not touch the parts of the big rocks that protruded.

After about 20 kilometers drive, I saw a board about another waterfalls, the Latefoss. I had my camera ready, just in case. What we did not expect was the Latefoss warerfall was just also along the road! A few meters we could again see the waters flowing out from the falls! We had the chance to park for a good 15 minutes in a small crowded parking just after the bridge.

The Latefoss waterfalls are two falls separated by a big body of land mass, making them twin falls. The falls drop 165 meters. One doesn’t need to do a tedious hike to see this wonderful attraction, as it is easily accessible by road, being situated along R 13. Coming from Haugesund, we had to cross a small concrete bridge to go to the small parking area. From there, there is a marvellous view of this spectacular wonder of nature! The waters from the falls flows violently under the concrete bridge, going down to the river. It was a sight to behold! Just like a ferocious monster, a wild beast! The sound of the falls was a bit deafening, the outbursts of the water makes one wet. The river where the water end up to is equally wild too! Though it was raining a bit, that didn’t stop the many people to have a short stop over and wonder the Latefoss!

THE TOWN OF ODDA

After that short exciting stop over, we continued our drive up to Odda. On our first night, we found a parking at the old industry area of Odda. It is a big parking situated at the site of old abandoned industrial buildings. Together with some 6 other campers, we stayed the rainy night there. The following day, after having a quick walk to the tourist office, we found a more convenient parking, a big public parking area near the fjord, beside the church. We stayed another day here.

Odda is quite a big town, based on the area it has and the many houses we saw around. We learned that in the earlier years, it was a booming industry town. It has a reasonably sized harbour, small shopping area, bus station, camping and area for campers.

RELAXED WALK AROUND AROUND ODDA

With the map we got from the tourist office, Hans and I did a 3-hour walk around town. Starting from the tourist office, we followed the road 13 and turning right by Coop supermarket. From there we went uphill, obtaining a grand view of the town and the fjord. We passed a big cemetery up in the mountain. Going down again, we passed a, athletic field, a tennis court, and a camping area, by the river Hovden. It was a nice stroll, until it began to rain again. We stopped for a while, waited for the rain to stop.

When it did, we went on, reaching the main road, crossed it up to the small steel bridge. Because we did not want to walk back thru the main road, we  crossed the old steel bridge and from there, we followed a narrow road uphill to the left. It was a kind of culture trail,  the Mannsaker-Hjollo trail, with some important information about some areas/farms, which unfortunately we did not understand as it was in Norwegian  language. Anyway, we continued on to our leisurely stroll, at the same time, the weather did not know what it wanted. Rain…stop….a bit of sun…rain…sun…rain…we just went on. 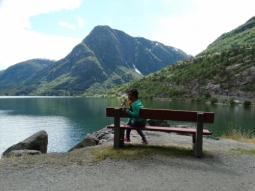 The narrow road became a dirt road. At one point, we could choose to turn right to immediately go back to the center. But no, we wanted always the hardest and longest way. We continued walking until we were almost at the forested area, but still with clear pathway. Following that, and the sight of the river  Opo, we came to a bit elevated area of Odda. It was the end of the trail, and we came down again back to the camper. 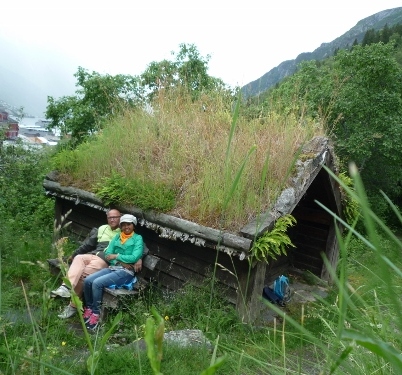 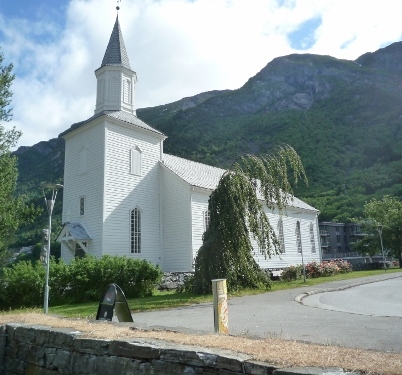 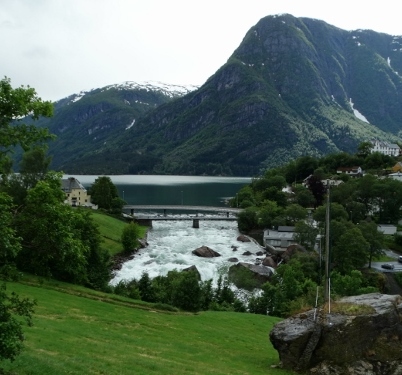 It was relaxed afternoon stroll, the kind that we haven’t done for a long time. It was different from what we normally do here in Norway. Having done that, we were able to have a better and nicer view of the town. We planned to do the Rossnos hike the next day, a hike that is more difficult that we had this day. But we blasted it off, considering that we still had muscle pains from the last hike.

A VISIT TO NORWEGIAN MUSEUM OF HYDROPOWER AND INDUSTRY

The next day, after having a walk around the town of Odda, we decided to drive through to the next village, Tyssedal to visit the NVIM, The Norwegian Museum of HydroPower and Industry. Entrance fee to this museum was 90 NOK and for Hans, 50 NOK.  The NVIM is a monument of the hydropower adventure  that started in 1906. There was a short film in the auditorium showing the history of the power station and how the villages of Odda and Tyssedal boomed during the 1910s.

After the film, the museum  employee conducted a guided tour, explaining some of the major events to us, showing us the building with 15 giant generators and turbines and also the mega-preserved control panel. After the guided tour, Hans and I stayed a bit longer in the building, looking and studying the machines and reading the descriptions.  Because the guide said that concerts are also being held in the building because of its good acoustics, I quickly tested it also by singing a song J IKAW, for our Bronze jubileum the following day . It was good.

After our visit to the museum, we drove about 3 kms uphill to the village of Tyssedal, planning to make a short hike to the Lilletopp, where the distribution dams , water tunnels and pipes of the power station could be found. But we could not drive any further as the road was narrow and closed as the parking to the Troltunga hike was full. There was well a parking at Tyssedalhallen but it cost 7 euro. So again, we blasted our plan, drove away going to our next destination. Where it is…stay tuned 🙂