Karmoy, the Homeland of the Viking Kings, a 30-km long island, is Norway’s most densely populated island. It is connected to Haugesund by a long bridge, the Karmsund bridge. This island is said to be the home of the Vikings and it is where Norway got its name, thru the narrow strait that in Viking times was known as the “North Way” or Nordvegen (Norway).

Having spent more than three weeks in the countrysides and mountains, Hans and I wanted to taste a little bit of history and sea, and hoping to see some magnificent sunsets. So after Sand, we drove to Karmoy island. It was rather an expensive trip because as long as we drove to E134, the toll began. And all the way to the island via Rv 47, we have passed at least 5 toll gates which cost us 12 NOK per toll, and again on driving out of the island, the same number of tolls!  But as long as we were in the island, the change of sceneries was immediately noticeable… no more high mountains and cliffs and no more driving on the valleys. It was a little flat, and quieter. We camped at different places around the island, all for free.Our Island adventure in karmoy lasted five days : from July 2-6, 2015.

4. Parking infront of Copper Mine Museum

HIGHLIGHTS OF OUR KARMOY ISLAND EXPERIENCE

The charming town of Skudeneshavn lies at the southern point of Karmoy Island. It is said one of the best preserved small towns in Norway, with its picturesque white houses and wharfside warehouses. The stroll along around the old town of Skudeneshavn, Gamle Skudeneshavn, begins at Soragada street. Walking thru this street, one gets to see charming well-kept authentic white wooden houses with gardens enclosed in white painted wooden fences. It is noticeable that some of the back parts of these houses were painted in either red or deep yellow, because during the early years, these paint colors were not expensive. There are also a number of cozy homey cafes along the street, such as the Verdens Minste Kafe (the World’s smallest café), Majorstuen café and Takelurfabrikken. These cafes are really small and cozy!

At the end of Soragada street is the park with the statue of The Lady of the Park at the entrance. It is quite a big park, quiet with lots of big rocks, including the so-called Moon Stone, believed to be 800 million years old!  There is viewpoint at the park where one could see the whole harbour. Going down the park is the harbour where we parked for a day.  The town also has a big harbour which is home for quite a number of tall sailboats and normal boats. There are a number of small shops around the central harbour, and art galleries too. Not to mention, some good antique shops, where Hans bought an old painting, a fishingset and a porcelain bowl.

It was a good moment that we were in Skudeneshavn, in a way that it was also the Skudefestivallen. This festival is a big boat festival and there were quite a number of boats, old and new, big and small, anchored on the harbour on display. Aside from that, there was a kind of market on the street. Everything was on sale, from Viking attributes to clothes to local handmade products to food. Even Filipino food, imagine that! There was also entertainment/concerts, both for free and the paying public. And on the last day, Sunday an ecumenical service was held in the main square, which Hans and I attended. It was really busy in town during thewse festival days, that we thought the people would be very glad once it’s all over and the tranquillity of the place returns. 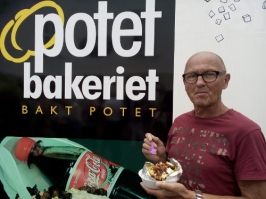 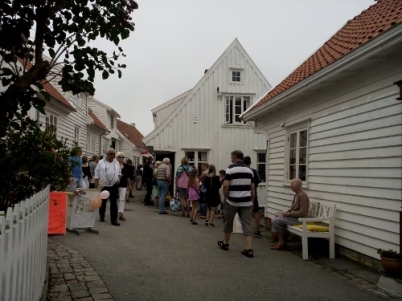 III. THE BEACHES OF KARMOY

Karmoy Island has a 140-km coastline. We were privileged to have spent some of our times in a couple of its beaches, namely the Sandvesanden Beach and Akrehamn beach. Although the weather was not totally cooperating (it was misty, cloudy and at times raining!) we still enjoyed its beaches. The beaches are white sandy ones, with secret inlets and coves and with facilities like parking, water , toilets and also picknick tables. Sandvesanden has a rather rough landscapes with big gray to black rocks on the coastline, that it looked sometimes unreal! It is like a moon landscape, or a paper mache artwork. Really different! The dunes are rich in flora; there were many wild flowers growing in the sand and in between big rocks! And flock of sheep decorate the grassfields. 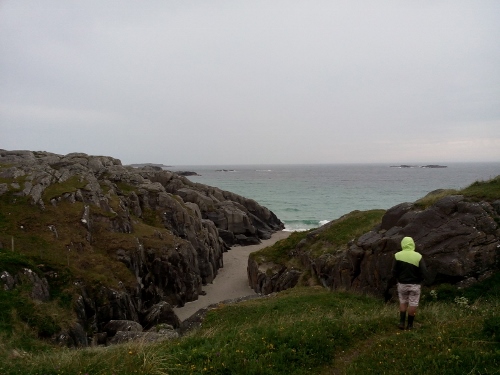 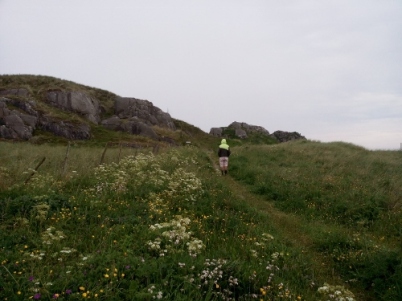 From Akrehamn beach, voted as Norway’s finest beach, Hans and I did the culture and nature trail up to Ferkingstad. It was a relaxed beach/dune stroll of 3.5 km long. Along the trail, we passed charming small inlets and beaches, flowery dunes, abandoned wooden boats on the shore, nice white houses, old burial sites from the Vikings times, old potato cellar, the small harbour of Ferkingstad, and as last, the Fisherman’s Memorial at Ferkingstad. This cross memorial was built in memory of fishermen who have lost their lives on the rough sea. What was striking was when we arrived at the memorial, music began to be played on the loud speaker at the small tower. We didn’t know if it was for 12.00 or if it was a kind of welcome for us. 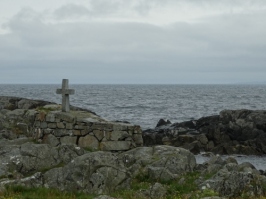 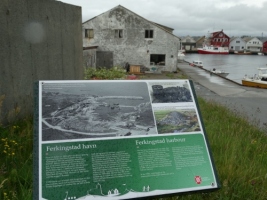 The Village of Visnes was quite a delightful surprise for us. We planned to have just a short stop here to take a picture of the Statue of Liberty, but when we arrived in the village, we liked it that we stayed the rest of the day there, and even the night. It was so quiet, we parked in front of the Statue of Liberty, by the Copper Mine Museum. It was however, raining the rest of the day that we just stayed most of the times in the camper the first day. The Haugesund Airport is near, we could see and hear airplanes landing and taking off.

The village of Visnes was once a mining village for copper. It was then one of Norway’s biggest copper mines which unfortunately closed down in 1972. Today, what remains are the Museum and some of the old equipments for mining. We were not able to visit the museum, as it was only open on Sundays. The copper used in making the Statue of Liberty in New York came from this village. A replica was made which now stands as a memorial in Visnes. And of course, we had several pictures made with the statue!

From the parking, there is a good easy trail in going to the forest, which is about 2.5 km walk. It is a kind of horse trail, middle in the pine forest, and on the eastern part are viewpoints with wonderful view of the village and the sea together with the small rocky islands around it. At one side of the trail stands the former Smelting Furnace for copper, which served as a location for one of my singing videos.

Hans’ plan to go fishing here did not materialize. The water was not deep enough, there were many grasses and also jellyfishes!

From Visnes, we drove 5 km back to Avaldsnes. This village is said to be Norway’s oldest Royal seat, which the Viking King Harald Fairhair chose as site of one of his Royal farms.

Hans and I visited the famous Olav’s Church and its old cemetery. The Church was built in about 1250 AD. Beside it is a so-called Virgin Mary’s Needle. There is a very interesting story about this needle and the Church (ask me for detailJ) We roamed around the cemetery and we saw some graves which dated as far as 1850s. From the Church. We a had a good view of the Karmsund bridge. Of course, picture taking here is unmissable.

Walking on, we took a very long walk to Bukkoya island, which could be reached by passing two small wooden bridges. We intentionally skipped The Norway History Center, as the entrance fee is 100 NOK pp. Too expensive for us. There is a Viking Farm reconstructed at the Bukkoya island and here men can see old Viking homes and equipments and could take a glimpse of how Viking life was. There was also a nice picnic area by the water, near the Viking garden.

After spending 5 days in the island, it was again time to go back to the mountains, to the valleys and to more exciting landscapes that Norway is rich of…..