SEGOVIA AND ITS AMAZING AQUADUCT

There were three reasons why we included Segovia in our route during this year’s camper adventure. These are the Aquaduct, the Alcazar and the Cathedral. I for one have seen so many wonderful pictures of these three monuments on twitter that I couldn’t  wait to see them! Boy, was I glad when the time finally came that we had to go to the city, on our way back to The Netherlands.

Coming from Avila, which is another one of the most interesting places we have been to, we drove just about 65 kilometers to get to Segovia. It was an uneventful drive, which only took us less than an hour. We first drove to a mix-parking found just outside the city center, but it was full there and there was no single camper present. So we drove to our alternative parking place by plaza de Toros, which was actually a special parking area for RVs. There is place for at most 10 RVs; with free services. RVs can park here for a maximum of three days. The historic city, which is 1 kilometer away, can be easily reached by a 20 minute walk, following the aquaduct.

THE HISTORIC CITY OF SEGOVIA

THE AQUADUCT OF SEGOVIA

A young lady who was worked as a water carrier, was fed up with carrying her pitcher through the steep streets of the city; so she made a pact with the devil : he would keep the woman’s soul if, before the cock crowed the following dawn, he had found a means for water to reach her dwelling. Attacked by guilt, the young lady prayed incessantly to avoid the loss of her soul. Meanwhile, a storm storm broke out and the devil started working frantically. But just before dawn. The cock crowed, and thed evil gave a terrifying shriek because fort he sake of just one more stone he had yet to place, he had lost the lady’s soul. The woman confessed her deed to the people of Segovia, who after sprinkling the arches with holy water to wipe out any traces of sulphur, happily accepted the new addition to the city. It is said that the holes which can be seen even today are the devil’s hoofprints.

(Legend of the Aquaduct)

We have never seen as astonishing and as extraordinarily wonderful construction as the Roman Aquaduct of Segovia. Built on the second half of the first century and declared as a World Heritage Site  by UNESCO in 1985, this construction masterpiece is a work of geniuses. It is a concrete manifestation of the  ingenuity, engineering capabilities, and construction prowess of the people of the earlier times. It is made up of unmortared, brick-ike granite blocks joined by an unexplainable means of ingenuous equilibrium, which somehow seemed to defy the law of gravity! It used to provide water to the city, coming from River Frio which is 17 kilometers from the city.   It has a total length of 16,220 meters, has 120 pillars and 167 arches. The width of these arches is 4.5 meters and the maximum height is 28.10 meters.  The Aquaduct has been and still the most prominent and impressive symbol of the city of Segovia.

We have walked several times along the aquaduct, and each time, we couldn’t help ourselves but to wonder at its construction! Each time, we asked ourselves how the people from the early times could have constructed such a magnificent and extraordinary work , considering the limitations on construction technology at those times! Each time, we couldn’t help but admire those builders for their ingenuity and genius! And we are just too lucky to inherit this legacy…this masterpiece!

Originally built as a fortress and served as a royal palace, a state prison and a royal artillery school,  the Alcazar de Segovia is one of the most distinctive castles in Spain. It was constructed in a romantic setting, rising majestically on a rock above two rivers, Eresma and Clamores . It seems to watch over the whole city of Segovia, and at the same time. Having the shape of a ship, the Alcazar exudes an air of mystery, providing its visitors the feeling that they are in the middle of a fairy tale story.

Having a fancy over castles and palaces, we did not miss the opportunity to visit the Alcazar. Entrance fee was 5.50 euro pp. A separate fee has to be paid if one wants to visit the Tower  (which we didn’t).  There are ten rooms which are open for visit, the most impressive was the Throne Room, followed by the Cord Room and then the armoury. There are also vantage points where one gets magnificent views of the surrounding areas.  The castle is of itself a magnificent one, but personally, I couldn’t agree with the declaration that this is one of the most fascinating castles in Spain. Only the three rooms I have mentioned above are special, and the rest are just not that spectacular. Thus, I found the entrance fee too pricey !

After our castle visit, Hans and I took a long walk down the valley, passing through Santiago Gate, walking at Paseo San Juan dela Cruz, up to Calle de San marcos, where we had a wonderful view of the castle. We then followed the river path, until we crossed a wooden bridge which led us to the park/path that leads to San Andres Gate up to the old Jewish Quarter. It was a nice long walk; we were accompanied by the sounds of birds all the time. 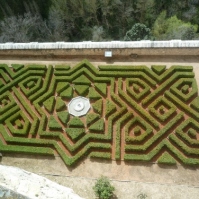 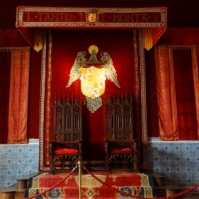 THE CATHEDRAL OF SEGOVIA

Located in the Main Square (Plaza Mayor) , the Nuestra Senora dela Asuncion y San Frutos Cathedral, or better known as the Cathedral of Segovia is a Gothic-style Roman Catholic Cathedral built in the mid-16th century. Entrance to the cathedral is 3 euro pp (7 euro, including visit to the tower). Entrance is free on Sundays from 9:30-13:30 (church only). Hans and I attended the Holy Eucharist in the Chapel of the Holy Sacrament on 11.00, and after the mass, we took some time to walk inside the cathedral.

After the cathedral visit, Hans and I wandered around the city. It was quite busy, being a Sunday. And when we returned to the Plaza Mayor, there was a group that was cooking paellas which was later sold to the public for a very low price : 3 euro per plate with a slice of bread and small glass of red wine, Of course, we also fell in line and bought the paella. That was a cheap lunch for us! 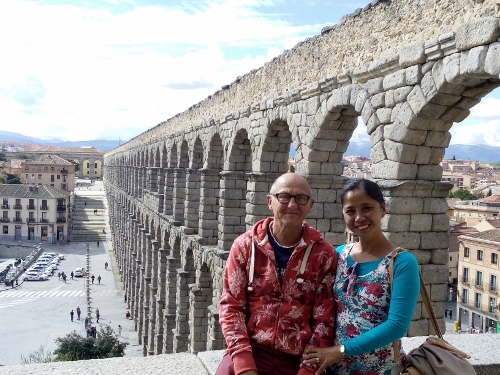