AVILA….HISTORIC CITY WITHIN THE WALLS

The place Avila was known to me because it was always associated with St. Therese of Avila, a saint I was familiar with during my high school years. But my knowledge ended with that. Last year, after a bit of research via goggle, I have seen some nice pictures of the place and read a bit about it; which made me put Avila on our list of cities to visit. So on our way back to Holland, we planned our route in a way that we stopped by this place.

After Cordoba, Hans and I drove 350 kilometers to get to Toledo, another historic Spanish city. But the weather was not so cooperating when we were there. It was cold and raining for 2 days. Our search for the tourist office was irritating and we could not see enough information or signboards along the way! We lost our interest to explore the city; instead we just spent a day walking around in the open market and doing some window shopping in a Centro Commercial. After that we decided to just leave the city and proceed to Avila, our next destination.

Avila was just about 140 kilometers away from Toledo. Because the weather forecast for the coming days was not so promising, we decided to leave Toledo late afternoon of Tuesday. It was raining when we left; was raining most of the time that we were driving; was very foggy on the road – so foggy that we did not have any idea of the surroundings where we were driving. Our only guide was our navigator which informed us that we were driving at the altitude of 1400 meters! And the truck that was driving ahead of us served as some kind of guide also. It was however a beautiful route on the mountains , only unfortunate that we could not see much! Anyway, we arrived in Avila after 3 hours of driving. The rain has stopped, thank God! We were able to park at the mix-parking just 700 meters from the city center. It is a guarded parking area , with view of the city walls and near the police station. 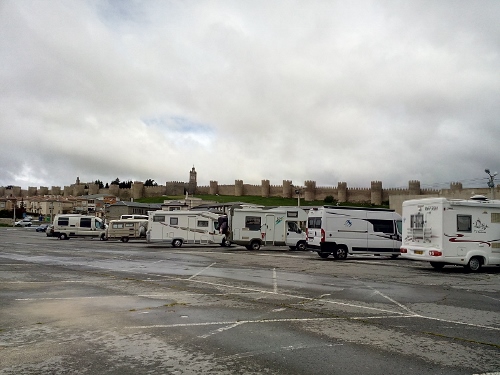 THE WALLED CITY OF AVILA

Avila is a historic city in Castilla Y Leon situated just 70 miles from Madrid. Its most famous landmarks are its medieval walls which are up to this day, remain intact and considered one of the most beautiful preserved medieval walls in Spain. And I completely agree with that! The walls of Avila, with  a perimeter of 2516 meters,  enclose the historic city with its 33 hectares internal surface. It has 87 beautiful semi-circular towers and 9 gates. Some sections of the walls are open to public : Alcazar, Carnicerias, Ronda Vieja and Puente Adaja. 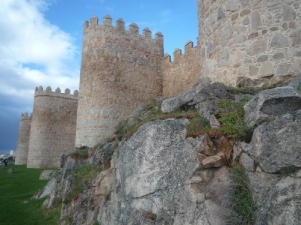 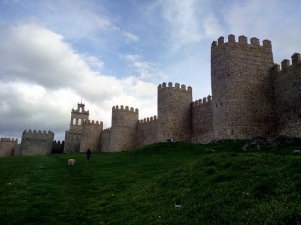 Hans and I have walked around the walls, beginning from the gate nearest to where we were parked. The nicest part of our walk was at Paseo del Rastro where the wall supports galleries, windows and balconies of the Episcopal Palace. Our walk brought us to Plaza de Santa Teresa, where the statue of the saint is found at the left side of the gate, and opposite is the Iglesia de San Pedro.

To have the best view of the Avila and its walls, we walked further from the city going to Cuatro Postes. Located along N510 on the road to Salamanca, just about 500 meters from our parking, Cuatro Postes is an old Humilladero (well of sorrows) with four columns and a big cross in the middle. It offers the most amazing views of the city and its walls. 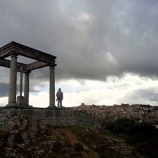 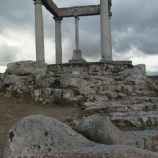 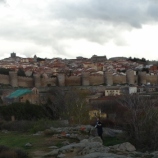 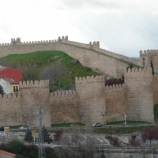 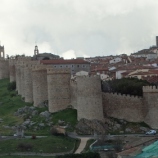 THE CITY OF ST. THERESE OF JESUS

Avila has always been paired with Saint Therese of Jesus of Avila. St. Therese of Avila, or St. Therese of Jesus, was a Carmelite Sister , a prominent Catholic  saint, virgin, mystic and a Doctor of the Church. Avila is the place where the saint was born and practiced her religious life. As such, there are various religious buildings which are deeply associated with the saint. These buildings offer deeper insights and understanding on the life and faith of St. Therese. Among the buildings we visited were the Convent and Museum of St. Therese. The Convent, found at Plaza dela Santa, was built on the birthplace of the saint. Entrance to the convent is free. Inside the convent , on the left wing is the room where the saint was born. Some reliquaries of the saint , such as old comb and walking stick and even the ring finger, are displayed on the shop found at the right side of the convent. 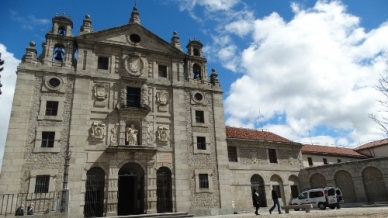 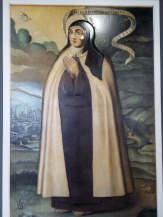 Wanting to get deeper understanding on the life of St. Therese, we visited the museum found at the crypt of the convent. Entrance was 2 euro pp. We were deeply disappointed though because all that was displayed in the museum was written in Spanish and I didn’t really have a single clue of what they were all about, except that they were teachings and prayers of the saint. It was so different from the museum of St. Therese of Lisieux in France, where there was an English translation and one gets a deeper understanding of the saint’s life. After that we went to Monasterio dela Encarnacion. It is located outside the city walls, and it is where the Saint spent her religious life. Unfortunately, the monastery was about to close when we arrived there. We were able to see only the place where the nuns receive their visitors. Again, a disappointment L Also the Church where the saint received her first foundation of faith and first holy communion was closed when we arrived there to visit. Lesson : Next time, study the opening hours first and plan the visit better.

A CITY OF CHURCHES

The city of Avila has numerous churches found both inside and outside its walls. Knowing us, we love to visit religious buildings as much as we can and in Avila we had just those opportunites. Among the churches we visited are :

The cathedral is dedicated to Salvador and raised on a former Romanesque temple. It is one of the nicest cathedrals we have ever visited. Entrance fee is 5 euro per person and we had access to the church, museum and cloister. 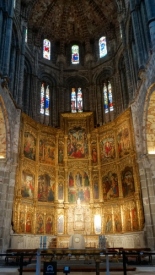 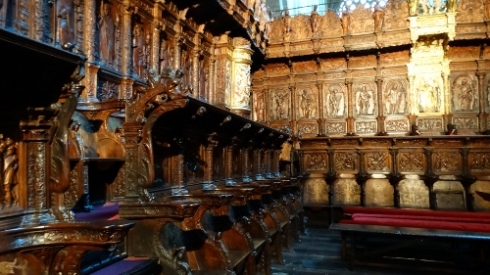 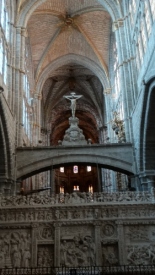 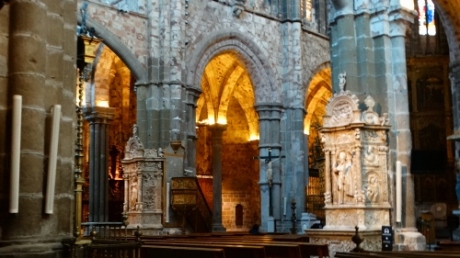 The Basilica is situated just outside the walls, near the tourist office. It is a Romanesque model, which floor plan is a Latin cross with three naves and a cross arm. Most impressive are the symbolic tomb in front of the altar, and the crypt of the basilica. Entrance is 2 euro pp. 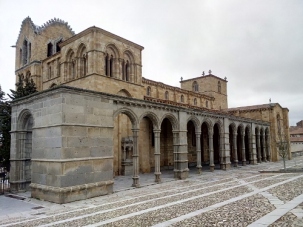 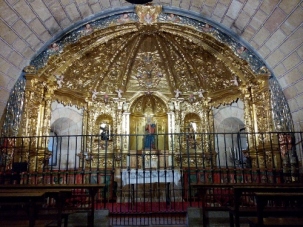 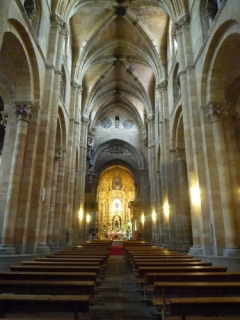 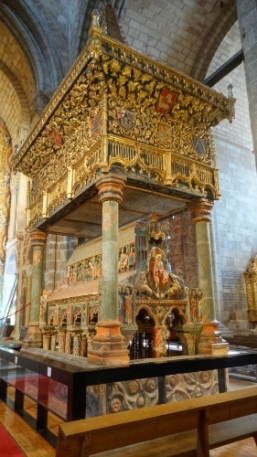 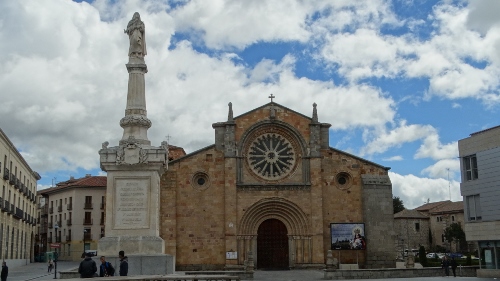 This was once a Romanesque church, converted to a garage and then to museum it is now today. It houses archeological pieces from different historical period of the city. Free entrance. 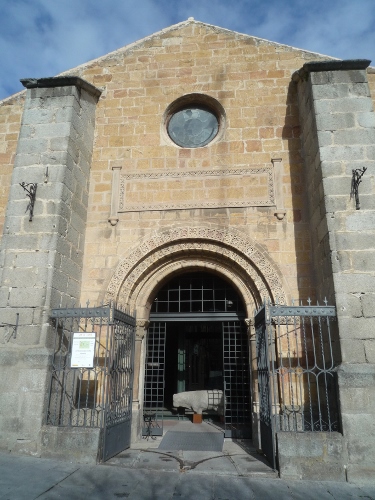 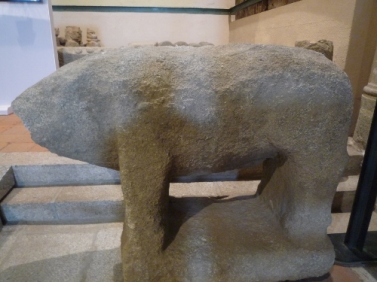 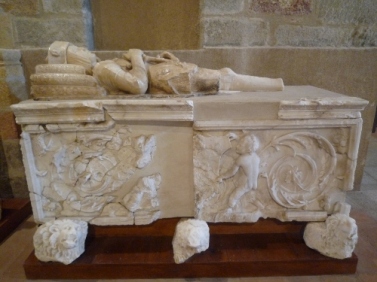 Avila might appear small, but it houses numerous religious buildings and museums. Among the museums we visited are :

The museum which is housed at casa delos Deanes is divided into three sections: traditional culture, archaeology and fine arts. It houses  and conserves archeological remains found in the province nd shows how the people from earlier times lived. 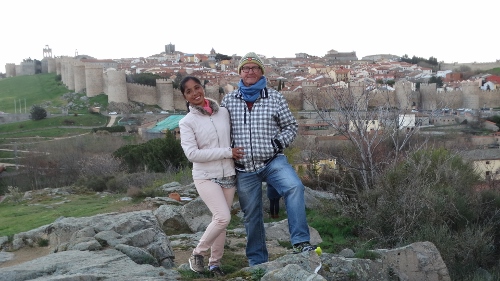