CHIPIONA : LOVELIER THE SECOND TIME AROUND

Why, you may ask. It was April last year when we first came to Chipiona. But because of urgent matters to attend to, we were able to stay only one day in the village. Too short to really discover the village’s charms. But luckily, this time around, we had more time; we were more relaxed; and as such, we were able to discover  more of the village and appreciate the charms and beauty of this quiet Andalucian coastal village. We stayed with our travel partner, D”Traveller for  almost two weeks in a big mix-parking area near the beach of Cruz del Mar. It is a reasonably big open parking near the lighthouse, of short walking distance to the center.

Located in the northwest coast of Cadiz, next to the mouth of Gaudalquivir river, Sanlucar de Barrameda and Rota, Chipiona has an area of 31.99 square kilometres and has an annual average temperature of 19 degrees C.

Chipiona is a charming fishing village . Like any other typical Spanish villages, people here seem to know each other; they greet each other profusely on streets, shops, bakeries and supermarkets. The word “haste”seems not to exist here. Café;s, bars and restaurants are a-plenty. It is normal to see people frequenting these establishments even for juts a drink and a short babble. And what equally amusing is the fact that it is just normal to see parents or grandparents bringing children with them in these establishments. No need to hire for a baby sitter for a couple of hours!

During our almost two-week stay in the village, we were able to explore the town, by mostly doing long walks around town, along the promenade, and yes, even biking. There is a good biking path which runs from Sanlucar up to Rota. And because fish is so cheap in this are, we were able to indulge ourselves with delicious fruits of the sea. (more about it in the other blog…Seafood Tripping in Chipiona). We also attended the Sunday Mass in the two churches in town.

Nuestra Senora dela O is located in the charming little plaza of Juan Carlos I. There are lots of palm tress in the plaza where the church is situated. The church  is a Gothic-style religious building  which was raised in the mid-16th century. Special features of this church are the  church tower,  the dome and the more than ten different tile designs on the inside walls. The image of Virgen dela O  is located at the high Altar.

The nave of the Church

The Sanctuary of Nuestra Senora de Regla, on the other hand, is located on the boulevard of Nuestra Senora de Regla next to the beach  with the same name. It has its origin as early as 13th century. From the distance, the sanctuary looks like a big sand castle; the image which was probably enhanced by its two impressive towers. The old  image of the Virgen de Regla is placed at the High Altar.  The Franciscan community lives in the monastery and takes care of the sanctuary.

The nave of the Sanctuary

Chipiona’s coastline is dominated by the lighthouse, said to be the highest in Spain. The coastline of Chipiona is a lot more beautiful and cleaner than its neighboring town, Sanlucar. All the beaches are reasonably accessible for all; there are even wooden pathways on some beaches and it is possible to take a long walk along the promenade, or even go biking. The most popular beach among the locals is the Playa de Regla because of its proximity to the town and its good accessibility.

The beaches Cruz del Mar and Camaron however stand out from the rest because it is here where the traditional fishing corrals are found. These fishing corrals are old handmade fishing construction built over stone platforms and trap the fish and other shellfish during low tide. It is unique in this area and also in Sanlucar. I’ve first seen these kind of corrals in Ile de Re in France, where the oysters are attached to these corrals.

All in all, we found Chipiona a charming little coastal fishing village. It is not yet too touristic and commercialized as compared to other Spanish coastal villages. The atmosphere is also friendly, amiable and relaxed. But what made our stay in the village more pleasurable was having the company of two good friends, Jeanne and Martin, another Dutch couple  whom we met via Facebook’s group Camper Praat en Treffens.  Jeanne and Martin are two very nice people, that we easily hit it off with them from the moment that we first  met last year, also here in Chipiona.  She is a true kitchen princess, who can literally perform magic in the kitchen ( thanks, Jeanne, for the aioli and tsaziki recipes). He is a technically gifted man who knows a lot about electronics and of course camper matters.  Having almost the same interests and values, we shared some wonderful days together, sharing some drinks, insights, tips and experiences, which was culminated by a two-day barbecue and aioli workshop in the weekend.  We are thankful for the gift of friendship. We are thankful for meeting wonderful people along the way.

Chipiona…really lovelier the second time around. 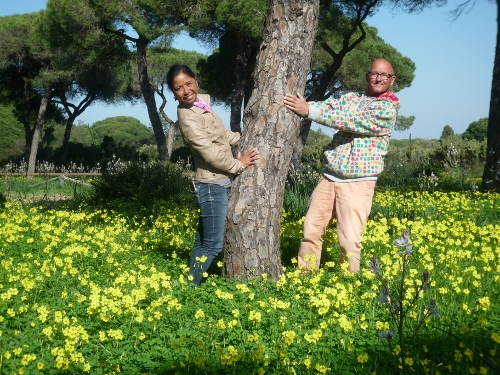