LISBON : A COSMOPOLITAN CITY WITH A TWIST

Lisbon (Lisboa) , one of the oldest cities in the world and the oldest in Western Europe, is the capital city of Portugal. Lisbon lies in the western Iberian Peninsula on the Atlantic ocean and the River Tagus. It is a cosmopolitan city, made visible by the presence of various modern and also old big buildings, shopping and leisure establishments, big sea and airports, and a lot of important monuments, musea, and churches.

Visiting Lisbon is like visiting a big open air museum. The city has lots to offer, qua attractions and sights that a weekend stay in the city is not just enough! We were already here during our first camper adventure ten years ago, and it was again time to revisit it! This time, we had more time to explore and enjoy some of the sights!

Getting To Lisbon : There are various ways to reach the city of Lisbon. Click here for more information. We however, as you already know, are with our camper D’Traveller.

We were already almost two months on the road, and we have planned it in such a way that we ended up in Lisbon to catch our flight back to The Netherlands just before half of December 2015. So after a day’s visit to Obidos, we drove another 100 kilometers to reach the city. We were able to find a parking area in the neighbourhood of Belem, where we stayed for a week, until we flew back to Holland. It is a free mix-parking located just along the river Tagus, near the ferry terminal, train station and some important sights. There are boards that campers are not allowed to park here, but we ignored those signs; and luckily we did not have any problems during our stay here. The city center is about 6 kilometers which could be reached by biking (along the river, 30 minutes ), with train( 8 minutes) or tram (20 minutes). Internet/wifi access is possibly by the small café nearby. Further, there were no other facilities.

I. LISBON : A CITY OF TRAMS

Part of Lisbon’s charms are the presence of trams. The city has a rather complicated yet surprisingly exciting network of trams, both old and new ones, which screech and drive along the city’s narrow and steep streets. A visit to this city would not be complete without trying to ride these authentic mode of transportation which since 1901 has been an important part of the city. There are various ways to obtain tickets for these trams. One is purchasing ticket on board which costs 2.85 per rit; the other is by purchasing a return journey in metro stations using Viva Viagem ticket which costs 1.40 per rit; and the cheapest way which we did is to purchase a day ticket which cost 6.50 per ticket which is valid for 24 hours and to be used in all mode of transportation in the city namely trams, bus, train and metro. 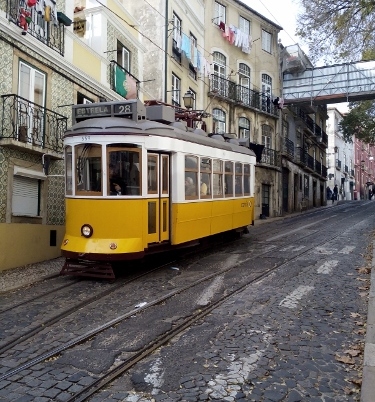 Two of the tramlines which are a must to take are Trams 15 and 28. Tram 15 connects the city of Lisbon to the district of Belem, which is home to some major attractions, in just 20 minutes. Tram 28 however, takes you to Alfama district and drives past cathedral and basilica. You must however be super careful and alert in driving these tramlines as it is where the pickpockets operate. We had the experience of witnessing these unpleasant event aboard these two tramlines!

Nowadays, aside from the trams, another mode of transportation mainly used by tourists are the TukTuks. We learned that 10 tuktuks began to appear in Lisbon’s streets three years ago , but now there are 300 of these things driving around in the city. There was even a parking in front of the cathedral!

Being one of the oldest cities in the word, Lisbon has accumulated and built lots of national monuments through the years. ‘Hoewever, because of multitude of buildings and musea, we had to choose what we wanted to visit, otherwise, we would end up bankrupt! Among the monuments which we saw and visited are :

It is a 16th century fort built in the River Tagus which has defended the city and held political prisoners before. At present, it is one of the most beautiful sight in the city and also most photographed spot too. Entrance fee is 6 euros.

The Padrao dos Descobrimentos is an imposing and iconic monument located on the banks of the River Tagus. Inaugurated in 1960 to commemorate the 500 year death anniversary of Henry The navigator, the structure is dedicated to the adventurers and explores who helped establish Portugal as a 14th century superpower. It is possible to go up the monument for only 3 euros and enjoy the views of the river and Belem. 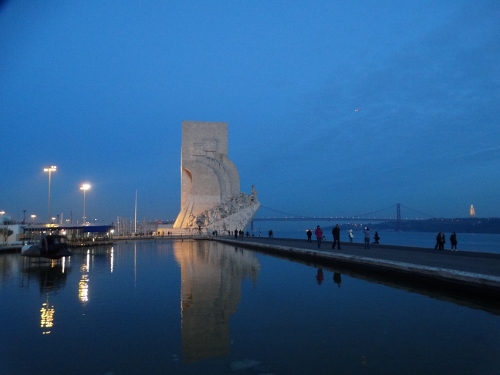 Located in Ajuda neighborhood in belem, this palace served as the summer residence of the Portuguese Royal family. Built between 1796 and 1826, the palace which was decorated with nice tapestries, furnitures, vases and clocks, still functions today especially as place for royal banquets and receiving visiting royal dignitaries. Entry is 5 euros pp.

The Portuguese saying “ Obras de Santa Engracia”(Santa Engracia’s works) is derived from the construction of this church. It is synonymous for endless construction works because the church whose construction began in 1681 was fully finished in 1966. It is now converted into a National Pantheon where some famous and illustrious Portuguese personalities are buried. It is possible to climb up to the roof terrace of the building where there are magnificent views of the city and river. Entrance is 6 euros pp, and it is worth it!

The Church of Sao Vicente de Fora, meaning “Church of St. Vincent Outside the Walls” is a 17th-century church and monastery in Lisbon. Founded around 1147 by the first Portuguese king for the Augustinian Order, it was dedicated to Saint Vincent Saragossa, patron saint of Lisbon. Entry to the church is free, however the visit to the museum is not. 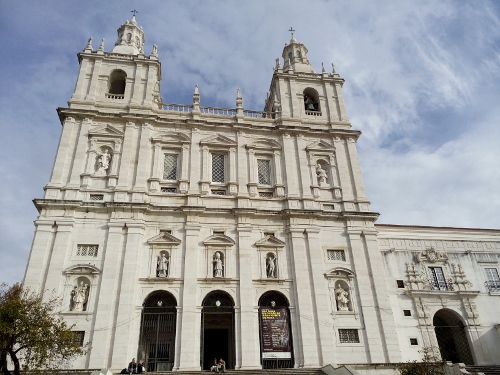 Constructed between 1779 – 1790, the Basilica do Estrella was the first church in the world dedicated to the sacred Heart of Jesus. It was built by the order of Queen Maria I as a fulfilled promise for giving birth to a son. Tower can be climbed by paying 4 euro pp, which we didn’t do, by the way. Take tram 28 to get here.

Located just near the Belem train station, the Museu Nacional dos Coches has a great exhibits of special carriages especially used by royal families in some countries of Europe like Portugal, Spain, , France and Italy. Entrance fee is 6 euros pp.

One of the most visited museums in Portugal (i think maybe because it is free, and even school children from ages 7 come here), The Museu da Electricidade is housed in a very large 20th century Industrial complex along the river Tagus In Belem and tells the history of electrical power plant . Entrance is free. 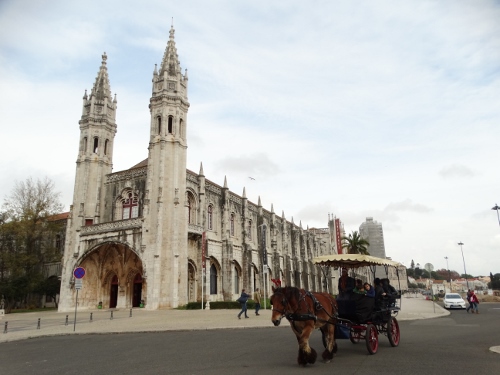 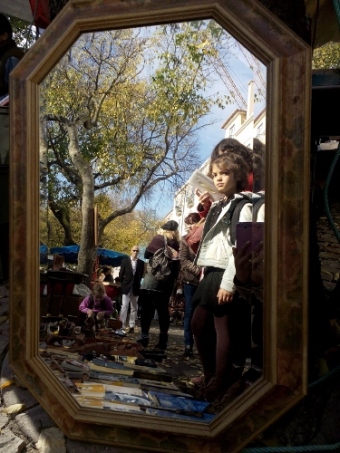 Feira da Ladra, or Lisbon’s Flea market, which originated in the middle ages , is the oldest in Lisbon. It is held every Tuesday and Saturday by the squares in San Vicente de Fora and Nacional Pantheon. On the said days, the squares are transformed into a busy mix of traders and buyers interacting with each other. Many items or products are offered on sale : from a very old flat iron to antique vases and utensils to old CDs, dvds, toys,old clothes and other modern souvenirs. Really the place to be if you are in search for something that deserve a place in your antique collection. Be prepared to haggle though, as the prices tend to be higher that what they really cost. We bought a nice set of Alcobaca vase here for 40 euros.

The good image that we have of Lisbon was clouded by a few nasty experiences we had during our one week stay in the city. We came to realize, that Lisbon, just like any other capital cities in the world, is prone to criminalities, vandalism and unimproved road situations. The one event that shocked us was when we both witnessed a pickpoket incident in tram 28 , coming from San Vicente de Fora. Upon getting in the tram, Hans has already noticed that three of the passengers could be pickpocketers. And he was right. Not long after we got in, the men went to work. What sad was, the driver of the tram did nothing about it. It was good that some of the other passengers saw the incident and the lady got her money back. And the pickpocketers? They got out of the tram; but hours later, we saw them again in another tram (Tram 15), hoping to score! It is sad, really, because many of the persons living there whom we have spoken to have warned us about it! And the presence of these criminals, who mostly came from Romania,  give a stain to the city.

The second nasty experience we had occurred in a couple of main squares namely Praca do Comercio and Rosso. Here men just walked up to us nonchalantly, offering us if we wanted some drugs or marijuana. It was shocking the first time; but after that, it became a normal occurrence. And what is incomprehensible was, the police was also walking around those squares, and yet, they couldn’t put a stop to that occurrence there. Also at night, when we expected that Praca Do Comercio would be good lighted, it was however very dark when we chanced to pass here at 7 pm. And it was not safe, considering at that time, many people were still walking around the square, being the main port of entry to the city, coming from the riverside.

Panoramic view of Praca do Comercio

The third one was the bad conditions of the streets. It looks like the government has done nothing more to improve the road situations of the city, especially in the inner streets. Many of the streets have a surface similar to moon craters because of the presence of holes and unfinished street works. I have admiration for the drivers here who mastered the art of avoiding those holes, and yet could drive fast and safe in the city!

Frankly speaking, we have not covered the whole of Lisbon during our one week stay here. There are just too much to see and do that a month is needed I think to really experience Lisbon. However, we were already satisfied from what we have seen, done and experienced in the city. It was again time to drive further…but first, we had to cut off our camper adventure and fly back to Holland to welcome our newborn grandson and also spend Christmas with our family….Until next time.