THE MEDIEVAL WALLED VILLAGE OF OBIDOS

The aroma of chestnuts being roasted coupled with the sound of joyful and soothing Christmas songs being played greeted us upon entering the walled village of Obidos in Portugal, giving us a nostalgic wonderful feeling that Christmas was in the air! Even more pleasantly surprising was when we were finally inside the village and saw the main street fully alive bustling with activities of people, mostly tourists, entering and departing small souvenir shops, cozy cafes and authentic art galleries like the Casa Romantica. The main street, which was decorated with Christmas lights, was the busiest street in the village; people were walking elbow to elbow, all the way from the main gate up to the church which was converted into a Library. Some people took detours and turned at some unknown small alleys which by the way were all paved. And walking amidst of it all, we thought, “So this is it! We arrived!” 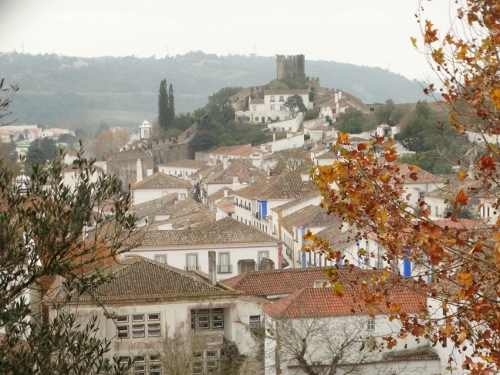 Obidos, a small village up in the hill in the district of Leiria, is favourite dowry among the Portuguese kings. The village is one of the most picturesque and best preserved fortified town of Portugal. It is enclosed by 14 meter high massive 13th century walls with battlements with huge round towers beyond proportions as compared to the tiny buildings within it.

We could still remember that during our first camper adventure in 2004, we drove past this village, but were not yet too curious to make a stop. This time around, we purposely drove to the village, after spending four relaxed days in Nazare. We stayed here for a day, enough to discover the village and walked along the enclosures. There was a good parking area special for campers, located near the viaduct, near the other big general parking area. It was just about 300 meters to the walled village. 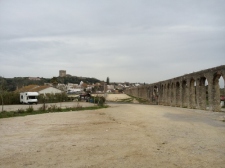 Parking here during the day is free and use of services is 2 euros; however overnight stay, including services cost 6 euro.

Walking around the walled village of Obidos gave us a feeling that the time has stood still and brought us back to the middle ages!   Except for the busy main streets with all its souvenir shops and cafes, the village remained almost exactly the same as in the 13 th century. The small white houses are adorned with blooming bouganvillas, geraniums , old grapebranches and other flowering plants I am not so familiar with, which all contribute in creating a nostalgic charming picture of the village. From the main street, the Rua Direita, there are several small narrow cobbled streets and alleys which are all part of a labyrinth that is Obidos. These streets brought us to some secret corners of the village, to more worn-out abandoned houses, some of the facades were painted white, red, blue and yellow. Remnants of its beauty and splendour could be seen by their architecture and the old bouganvilla plants still standing and clinging vast and proud at the walls of those houses. 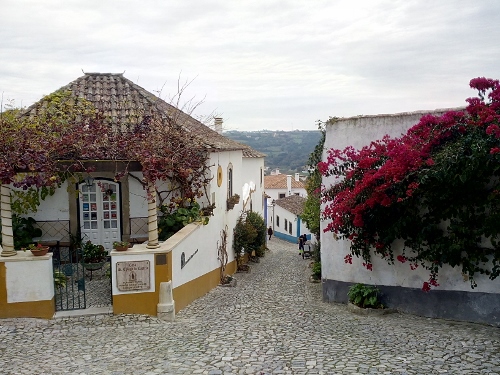 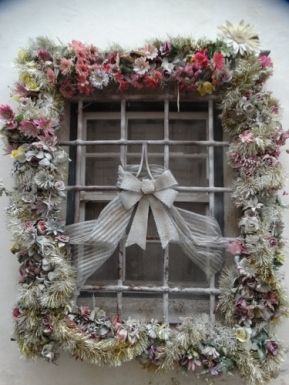 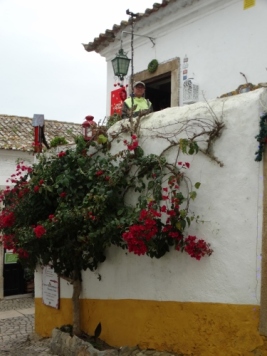 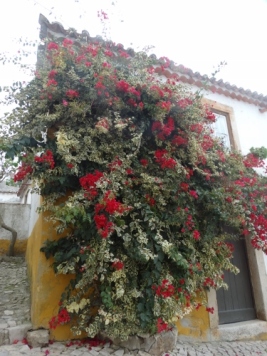 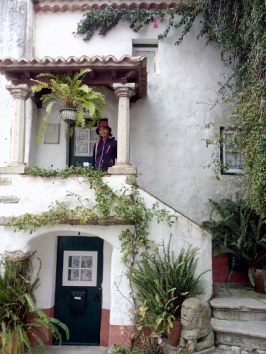 Hans and I just let ourselves got lost in the narrow streets, turning left and right, ignoring the small map we obtained from the tourist office. Walking on the main street, we occasionally entered some of the souvenir shops only to be shocked at the staggering high prices of the products! Yes, the prices were double as high as in other nearby villages of Nazare, Batalha and Alcobaca! We were thinking, the shop owners have the wrong notion that all tourists who visit Obidos have much to spend! Well, not us. Good thing we already bought some souvenirs in Fatima and Alcobaca! But business was still good, especially with all the Chinese and Korean tourists flocking in the village! Along the way, we made a short stop over at the Igreja Santa Maria, a 16thcentury old Rennaisance church with 18th century tile decorations, which is located at the main plaza of the village. After that we continued our walk until we reached another old church which is converted into a library. Nothing much to see here, we wanted to go to the castle, but unfortunately there was a kind of Christmas festival especially for children ongoing here and a ticket is needed to enter. So we turned right, and there began our more than an hour stroll along the walls of Obidos. Walking along the walls could be tricky; we had to be careful as the path is a bit narrow and there are no ropes of protection along it. However, our walk was wonderful; we had nice grand views of Obidos environs. Also we could see the walled village from a different angle, and had a better views of the small houses and streets that are enclosed. After having the long a bit tiring stroll, we decided to have a break, returned to the camper, and had an early dinner. 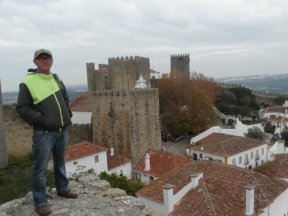 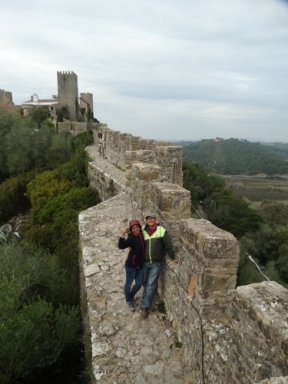 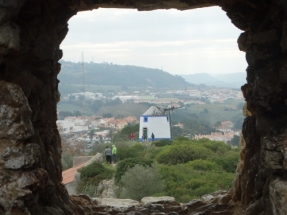 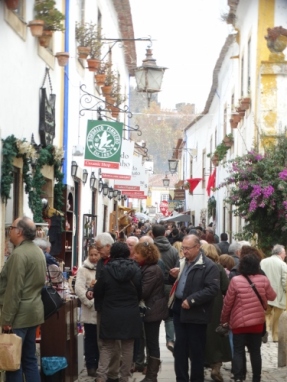 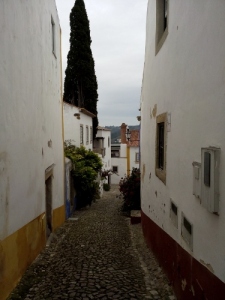 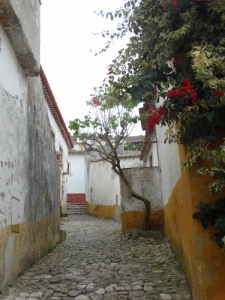 When darkness fell, we returned to the village and experienced it at night. There was drizzle, but that still didn’t stop the many tourists who were still walking around the village. The Christmas lights hanging along the walls were lighted, and it gave an extra magic effect! Chestnust were still roasting and I was tempted to buy some, but the price stopped me from doing so : 2 euros for a dozen! We, however, had a taste of the famous Ginja de Obidos, a natural handmade sour cherry liqueur, served in a small chocolate-made cup. It was a different experience, drinking that liqueur and eating up the cup afterwards! We didn’t go into one of those alleys anymore, as it was dark and we couldn’t see anything! After about an hour, we returned to the camper, tired but satisfied at our day trip in the medieval and nostalgic village of Obidos. We were glad that we have visited this village this time. We spent the rest of the night relaxedly in the camper, sharing a drink or two with each other. Cheers for another wonderful day! 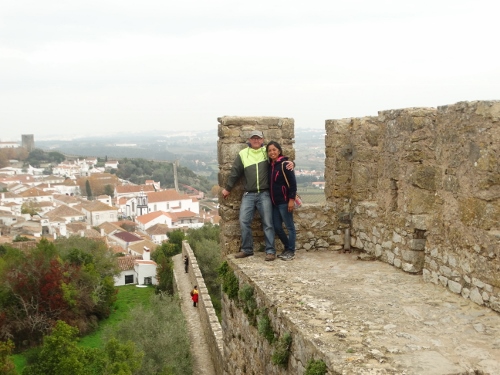 One thought on “THE MEDIEVAL WALLED VILLAGE OF OBIDOS”