BARCELOS AND THE LEGEND OF THE ROOSTER

Have you ever wondered where the hype over the Rooster of Barcelos came from? Why did it become a popular symbol of Portugal? Some people believe that it also brings good luck. There are few legends surrounding the rooster. My favourite story is about a pilgrim who was on his way to Santiago de Compostela. He stopped by Barcelos. Coincidentally there was a theft and the stolen object was found in his bag. He denied the accusation, but because of the evidence, he was sentenced to be hung. His last request was to be presented to the judge to prove his innocence for the last time. The judge was having a banquet at that time. The pilgrim prayed to God, and said that to prove his innocence, the rooster, which was being served for dinner, would crow three times. It did, and the pilgrim was released!

Because of the story behind it, the rooster of Barcelos has become one of the iconic symbols of the country, which was also supported and popularized by the Estado Novo. It stands for honesty, trust, honor and integrity and believed to bring good luck too. Walking around Barcelos, one would stumble upon this famous image; and the images come in all sizes, big and small. All souvenir shops are full of them. Of course, the traditional image has been improved, and every artist or sculptors have added their personal taste on the icon. And it was interesting to see so many of them scattered in the whole town. 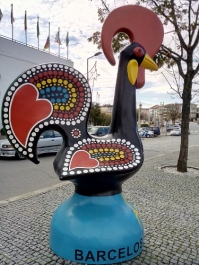 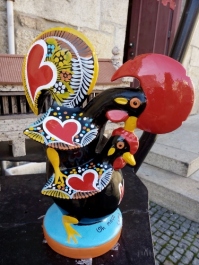 The charming town of Barcelos provided us our first Portuguese experience during our camper tour in the South. And it is fitting, because Barcelos, a town in the province of Braga in Portugal, is the place where one of the famous symbol of the country originated : the Gallo de Barcelos or the Rooster of Barcelos

We wanted to see the town where the hype over the rooster came from. And it was good because it was on our way to the south. Coming from Baiona in Spain, we drove about 110 kilometers in going to Barcelos in Portugal. It was Sunday afternoon, November 22 at 14.00 when we left Baiona. It was not a good day to drive, as it was raining the whole time. Luckily, 6 kilometers before we reached Barcelos, the rain stopped! We were able to find a parking area by the river, near the municipal swimming pool, just about 800 meters from the center. We parked here for a while, walked to the center, saw a big public parking area just 200 meters from the center. We then transferred and stayed one night here. However, on our second day, a van with suspicious passengers also parked near us, so we decided to return to our first parking place.

Our campsite in Barcelos

As I have stated earlier, upon arrival, we walked to the city center. There was a marathon on-going and it was busy. Also the weekly antique market was being held in the big parking area. And it was not good, for both of us! We roamed around the antique market, saw some interesting pieces, and almost congratulated ourselves for not buying a single thing! Until on the last moment, we saw some nice vases and I tried to haggle a lot lower than the asking price. We didn’t expect that it would be given to us. So we had no choice but to buy those vases! Also there were lots of stands which were selling Barcelos rooster images. We also bought 3 pieces, from just a normal Barcelos rooster image to a tissue holder to panholder and winebottle stopper! That was immediately an expensive half day in Barcelos for us!

Barcelos is a charming town and very easy to discover by foot. It had quite a few old historical buildings which can be visited for free. There hangs also a friendly atmosphere in the air, the people don’t look like they’re hasting. They walk in relaxed tempo; the cafes are quite popular by the locals, young and old alike.

We started our discovery of the town in Porta Nova. The plaza is decorated by a big fountain in the middle, the Fountain of Porta Nova Square (18th century) . Afterwards, we visited the Church of Bom Jesus de Cruz. The church which was constructed in 1710, is the main center of the traditional feasts of the Cross. It owes its construction to the miraculous appearance of a dark cross in the market square in 1504. The church was very beautiful, and its altar was magnificent. Some of the walls are covered with painted tiles. There was an altar of Jesus carrying the black cross at the left wing. Too bad, picture taking is not allowed. 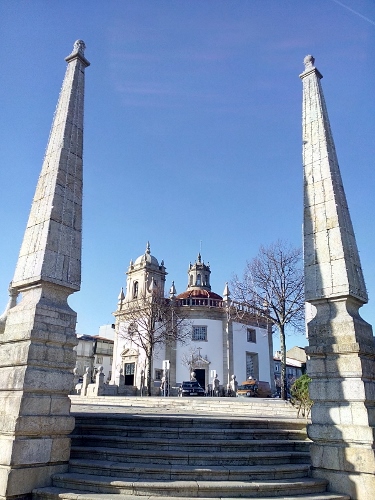 Entrance of the park 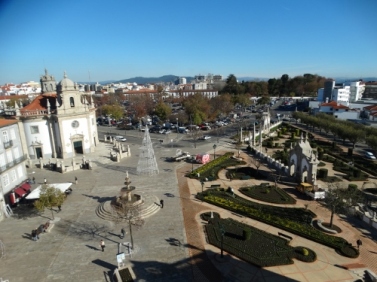 View from the medieval tower

We then climbed the medieval tower, which is also located in the same square. On the way to the top was a lace and embroidery exhibition which were really interesting. And on top of the tower, we were rewarded with fascinating panoramic views of the town, of the Porta Nova square and the gardens next to it. Descending from the tower, we went to the gardens besides the square, the Walkway of the Benches. It is a very nice gardens with charming gates and landscaped gardens. After our stroll in the gardens, we walked to the old part of the city. We found here the ayuntamiento building with its arched pavements. We walked past the parish church which unfortunately was closed. Until we came to the Palace of the Counts of Barcelos which is now an open Archeological Museum. It is a medieval palace, with only the walls and empty rooms that remain standing. Around it are some stone crosses, burial elements and old pillars. From the museum, there is a good view of the old medieval bridge. We then retraced our steps to the Porta Nova Square and had a break in one of the cafes in the plaza. Later in the afternoon, we had a delicious meal at one of the local restaurant for less than 10 euros, quite a cheap lunch for two persons!

At the square at night 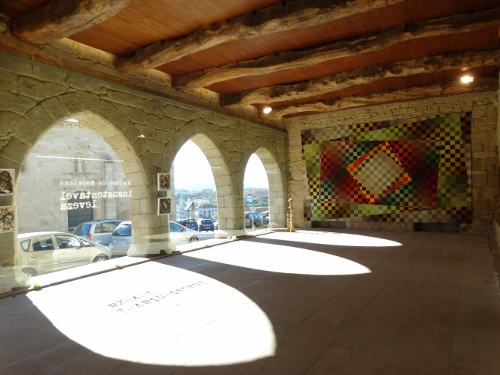 Beside the parking area where we were staying is the municipal swimming pool. Entrance fee was 4 euro pp in the afternoon, and 2 euro pp in the morning. Just like typical Dutch, we chose to go in the morning, as it saved us again 4 euros! We spent about 2 hours swimming and also in the Jacuzzi! The other part of the swimming pool was reserved for aquasport for old people and also for small children. It was also fun watching them.

After swimming, we went to the tourist information and I worked on my blogs. The two female personnels were friendly and accommodating. Another plus points for the town. 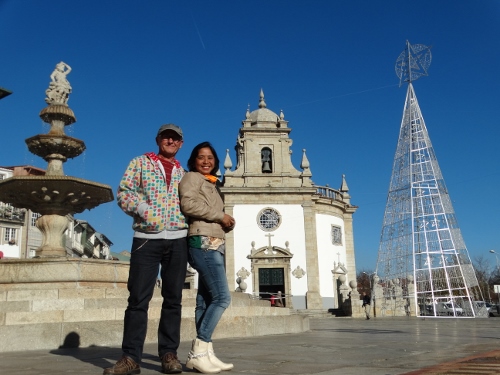 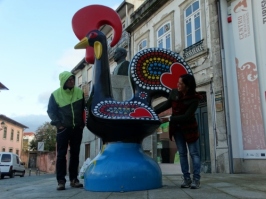 Our various pictures together 🙂

All in all, we had two interesting relaxed days in the town of Barcelos. Our stay has enable us to understand and appreciate the symbol of the country, plus we were also able to discover the secret charms that Barcelos possesses. A nice start of our Portuguese experience!

2 thoughts on “BARCELOS AND THE LEGEND OF THE ROOSTER”