LUGO : A WALLED CITY WITHIN A CITY

Lugo, formerly known as Lucus Augusti, , is a city in the Autonomous Community of Galicia in northwestern part of Spain. It is a city of great historical, cultural, religious and architectural importance not only in Spain, but also in the whole world. It is the site of the only intact Roman walls in the world; the home of many impressive baroque buildings in the country; and host to many pilgrims who are walking the Camino de Santiago on their way to Santiago de Compostela. Aside from these, the location of the city made it the more romantic as it lies proudly on the mountains, more than 400 meters high above sea level, with Rio Mino at its feet.

OUR COMING TO LUGO

But even with the abovementioned attributes that made Lugo famous, honestly, in our part, we had no idea what to expect when we drove here. As you notice, we were on our way to Portugal, with as objective to make a stop at Santiago Compostela. It just so happened that Lugo lies on the route and according to my dear Hans, the name of the city appealed to him, so off we went. Instead of driving thru the coast, we went offcoast and headed to Lugo. Following the National Route (NR) 540, we drove in the mountains and registered 605 meters as the highest altitude we had. It was very foggy up in the mountains, with almost zero visibility. We could see the thin clouds passing us by! After driving a little more than 90 kilometers, we finally arrived in Lugo. We incidentally drove past Lugo’s walls and the first thing that came to my mind was the Castle of Angers in France, but then in much greater dimensions.

Our campsite for 3 days in Lugo

Lugo has a special parking area for RVs, complete with services and free of charge (big plus point for the city). It is about 800 meters from the walled city, beside Parque Rosalia Castro, overlooking the Rio Mino. We stayed here for three undisturbed days (November 14-16, 2015). It was normally foggy and cold in the morning, but a bit warmer during the rest of the day.

LUGO AND ITS ROMAN WALLS

Arriving in the city, we were amazed by the walls surrounding Lugo. These walls, declared as a National Site in 1921 and as a UNESCO World Heritage Site in 2000, is the most important Roman monument in the city. Constructed between 260 and 310 AD, the walls have a perimeter of 2.140 meters and encloses an area of 34 hectares : a whole city with all the things that go with it are enclosed in the massive impressive walls! It has 10 major gateways and six inner staircases leading to the top.

During our stay in the city, we took two long walks along the walls. The first time, on purpose, and the second time, by pure mistake, both on our first day! Our point of entry was the Porta Santiago, which is easily accessible from the parking. From outside the port, we could already see the towers of the Cathedral. Climbing the top of the Porta Santiago, we began our long walk on the walls. We did our walk in a clockwise manner, then later we read that it was better to do it in a counter-clockwise way. Anyway, it was interesting as well as relaxing to do the walk, as we had the chance to see the city in its totality, in and out. We enjoyed the views of the modern as well as ancient Lugo, as evident by the changing street and building scenes before our eyes. We had also good vantage points of the city. We came across many other people, locals and tourists alike who were doing the walks and some of them, even jogging! We ended our wall tour at the same port, the Santiago.

On our second day, we visited the Centro de Interpretacion de la Muralla, a kind of museum which explains the existence of the Roman walls in Lugo. Although the writings on the rooms are in Spanish, there is a short film documentary in English which narrates the story of the walls from the Roman times up to the present time. It was a very informative and enlightening visit, as we acquired a deeper understanding and appreciation of the presence of the walls. Understanding its history and purpose made us appreciate the walls even more and see it in different light. After that, we had a short walk again on the walls, doing only four gates, from Porta Santiago up to Porta San Pedro. Then we went outside the walls and saw from the outside the impressive and mighty defence construction work, and admired particularly the Mosqueira, the only remaining tower in the walls.

LUGO AS A PRIMITIVE ROAD TO SANTIAGO

Lugo is also a strategic town in going to Santiago, a fitting stop for the pilgrims who are doing the famous Camino de Santiago. In fact, it was a compulsory way to go to Santiago in the early years. It was evident by the presence of many pilgrim hostels and medieval hospitals during the early years. It was also in this city that we have seen many pilgrims walking around, and almost everywhere, a signboard for Camino de Santiago, guiding the pilgrims on their way. It is also an ideal place to begin the journey, completing the last 100 kilometers, which is the minimum distance to get the pilgrim certificate. It was in Lugo where we have our first conversation with a Camino pilgrim, an American woman who began her journey in France.

To better understand Lugo as a strategic way to Santiago, Hans and I visited the Centro de Interpretacion del Camino de Santiago, which is located just next to the tourist office. It has an exposition of the history of the pilgrim’s walk and also some vital information about some famous people who stopped by at Lugo on their way to Santiago.

LUGO AS A SITE TO IMPRESSIVE MEDIEVAL BUILDINGS

Our visit to Lugo has given as an insight to some of the great massive medieval buildings in Spain, which were constructed in either Gothic or Baroque style.

These are just some of the impressive buildings and sites we have visited in the city. Alongside with it, there were also lots of charming bustling plazas in several corners of the city. Among the most famous are Praza Maior (already mentioned), Praza Santa Maria, Praza de Soidade, Parza de San Marcos, Praza Campo Castelo and Praza Constitucion (outside the walls). There are still some museums and churches which we were not able to visit because they were closed when we were there. There are also narrow streets with small cafes and restaurants. What special is, some cafes offer bread when you order a cup of coffee, for free. At least, we have experienced that two times. 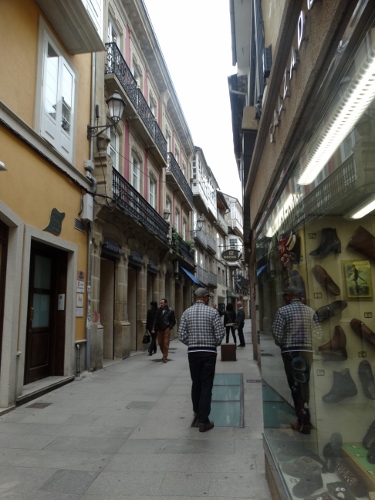 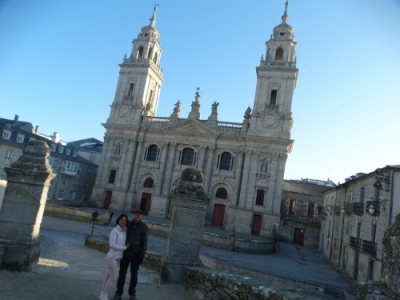 Our customary picture together 😉

The city of Lugo is a revelation for both of us. It is a city worthy to be visited, at least if you want to be historically, religiously and culturally enriched! A city within a city, because the walled city of Lugo is just a part of a bigger city, that is Lugo. It has its own system, lots of official buildings and monuments, schools, traffic, and a life of its own! Walking around the walled city of Lugo gave us a sense of safety and a feeling of unity with the people who have lived here before. Walking around the old city brought us back in times where life was less complicated; where people lived in harmony with each other, having firm belief and trust in God; walking in the walled city of Lugo gave us a glimpse of how life was before. And lastly, walking along the walls of the Lugo gave us the sense of gratitude ; a feeling of gratitude for the people who have fought for the defence of this city so that we may enjoy and appreciate it today.

2 thoughts on “LUGO : A WALLED CITY WITHIN A CITY”