OUR ASTURIAN EXPERIENCE : GIJON AND NAVIA

Continuing our journey to the south, we abruptly left the city of Santander after being told by the port police that it was not allowed to park D’Traveller by the port or anywhere else within the city center. The only possible place was 7 kilometers further outside the city. Hence, having no interest in doing do, we opted to drive away. Destination : Gijon. It was almost 16.30 when we left Santander, and after a little more than 2 hours, we arrived in Gijon. There is a specified parking for RVs here, complete with facilities.

The parking is a mix-parking area where special places are reserved for RVs, just before the port. It is situated by Playa El Arbeyal, about 3.5 kilometers from the city center. I had to write however that until now, it is the worst parking we have had because of its proximity to the road and trainline. The noise was continuous, all day long, from early in the morning until late at night! We haven’t had a good rest here. But, yeah, no need to complain. It is anyway, free and with services.

GIJON IN ONE DAY

When I wrote in our profile that D’Traveller would bring us to beautiful and not too beautiful places, not knowingly, I would probably be  referring to our visit in Gijon as a not too beautiful destination. I hope it would not sound too harsh. But after less than a day, Hans and I both felt that we have seen enough. True, every place has its charms, but in Gijon, we couldn’t pinpoint a particular aspect that we could say we were impressed! Are we acting as snobs? Do we have high expectations? Or maybe after having been to more impressive places, that seeing Gijon didn’t impress us anymore.

It all began with looking for the tourist office. Never did it took us so long to find it. There was no clear signs on the road, and even for some important point of interests, boards are scarce. Anyway, having found that, we took our usual walk around the city. First, in the so-called Old Town of the city. Aside from the two big plazas, Marques and Mayor, we haven’t seen anything quite impressive. The only two things that saved the day were our visit to Iglesia San Pedro with its beautifully-adorned chapel of adoration and the our stroll at Cimavilla, a big park along the coast with panoramic view of the sea and the city. Even the numerous shops didn’t excite us anymore; it could be because we didn’t have the need to shop and just doing windowshopping would be just a waste of time.

It is for this feeling of discontent and the fact that we couldn’t have proper rest in the parking that we decided to drive further to our next destination. So early the next morning, after again a bad night, we drove to Navia, thus ending our short stint in Gijon.

NAVIA AND ITS PARQUE NATURAL HISTORICO

Leaving Gijon on November 12, 2015, we headed to our next destination, Navia. It is a small town along the coast. We wanted to visit the weekly market here which is coincidentally held on Thursdays. It was only 105 kilometers from Gijon so we were there already before noon. Having parked our RV in the proper parking area, we headed to the tourist office. We obtained vital information about the village and also about the surrounding area which comprised the Parque Natural Historico del Navia. It seemed interesting, but we have already passed by some of the nice spots coming from Gijon like Puerto de Vega and the other two attractions , the Castro de Coana and the Cascadas de Oneta are both out of the way. The only remaining path we could follow is from Navia to Tapia de Casariego.

Having strolled around the market (mostly clothes, shoes and bags), we took a walk around the small town of Navia. Our walk brought us to Playa de Navia, where a long nice boulevard was constructed to easily access the beach. From it was a nice beach, sandy with lots of big waves. The waves were so wild that they splashed violently at the end of the pier. From the beach, we had a nice view of the mountains on the left, with the Cabo de San Agustin (more about it later) and the lighthouse.

That same afternoon, we left Navia and drove 5 kilometers to the next village, Ortiguera, hoping to park at the parking we found at Camper apps which is near the lighthouse. When we arrived there, there were only two designated parking places, and the grassland was being worked on by construction men. We saw from a distance, a nice parking with three campers, and we asked somebody how to get there. It was in Playa Arnelles. We drove back, going in in a tractor road which was really narrow, winding and long. Luckily, we came across no other vehicles. Pphheww! We just drove at the wrong road, because after a while, we came to a much wider road which is the normal access road to the beach! Anyway, we reached the parking for Playa Arnelles; and I might say, this is one of the nicest parking we have ever had during this trip. The parking area is spacious and flat, with easy access to the beach. It has a very nice view of the sea, the beach and the lighthouse. The beach is charming and a bit secluded, which could be reached by using the stairs. It is quite steep, but it is all worth it. On the other side of the beach is also stair to get to the lighthouse. There are further no facilities. But hey, we are self-sustaining!

It was sunny when we arrived In Ortiguera and we thought  it would be the same too the following day. But we got it missed! The next day was cloudy and later in the day, it began to rain a little. With our raincoats on, we did a long walk in the beach, and later up to the lighthouse and Cabo de San Agustin. The views here were just amazing. Too bad for the cloudy sky, we didn’t have a clear view of the sea and the mountains. Nevertheles, we tried to enjoy what we had at that moment. It was simply beautiful and calming! A good rest after restless nights in Gijon. We even took a shower at the public shower in the beach! Heerlijk!

Church and lighthouse in Ortiguera

The weather didn’t look good for the next couple of days, so we decided to leave for Tapia de Casariego that same afternoon. It was just 24 kilometers from Ortiguera. We left Ortiguera at 14.00 and arrived in Tapia after 30 minutes of driving. Again, the village has a special parking for RVs, with services. There was an infoboard stating that parking is 4 euro per day, but when we were there, there was no one who collected the parking fee. 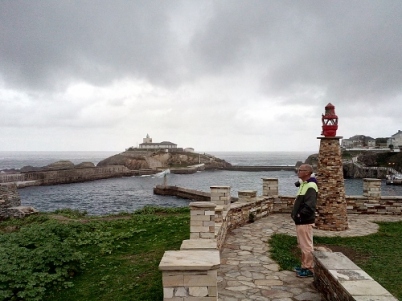 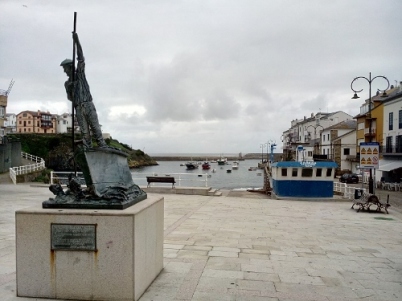 It was also cloudy and cold in Tapia that day. Nevertheless, we made our usual round in the town. The tourist office was closed, so we just kind of wander around the town, until we reached the small fishing port. There is also a lighthouse, but we couldn’t get closer to it because big wild waves were splashing against the bridge used in going to it. Really the sea was wild that day! We followed the way along the coast and Mirador and we got to pass thru Tapia beaches. There were big waves everywhere. However, we found the charming secluded beach in Arnelles a lot more beautiful than the beach in Tapia. It was getting late, a little after 6 in the evening and it began to rain again! We spent the rest of the quiet evening reading, updating my blogs, and planning our next destination. And so ended our short not so exciting adventure in Asturian province of Spain.