It was our first time to go on vacation with D’Traveller, as we called our camper. A little corny, but to make this trip special, we decided to do the Romantic Road of Germany, or the so-called Romantische Strasse. This road officially begins in Würzburg and ends in Füssen, near the Austrian border, covering a distance of about 430 kms.

Instead of always taking the boring highways, the route took us to beautiful countrysides, awesome landscapes and quiet roads, which made the route special and “romantic”. We started our journey in Koblenz, instead of Würzburg, and after 2 weeks, rounded it up also in the same city. And it has caused us almost 1800 kms of travel to finish the route, beginning from home in Gaanderen and again back, including the numerous wrong turns and other side trips we made along the way. It was a 2-week vacation, from April 6 – 21, 2014. After a lot of preparations, technical and aesthetic, we left Gaanderen on a beautiful Sunday morning, April 6, 2014 and reached our first stop, Koblenz in the afternoon.

View of Landsberg am Lech 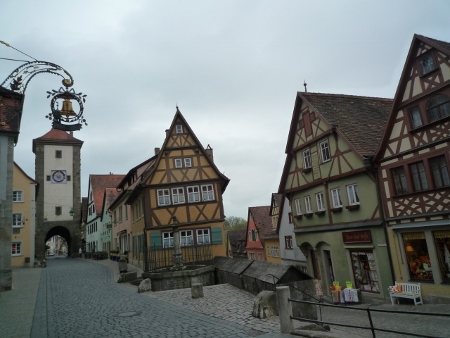 And so it started. From then on we went to the different cities and villages included in the Romantic Road, from Würzburg all the way down to Füssen. And how further we went, how colder it became! We even experienced snow in our last stop in Schwangau and Füssen; that we didn’t expect and also not waiting for! It was a very memorable and exciting vacation for both of us. We did a lot of things together, without the disturbance of computers and TV. We have driven almost 2000 kms , biked in the most beautiful locations, walked and strolled a lot, seen many nice spots, and even climbed mountain! And D’Traveller has passed his first test, even though we had a flat tire at A3, on our way back home! The D’Traveller is ready for bigger and longer journey…with us!!

The city of Wurzburg