Ït is not the place you travel that makes it worthwhile; it’s the people you meet along the way.”

Our normal way of travelling and exploring a place had a very different note when we were in Armacao da Pera. Armacao da Pera, located in the municipality of Silves, is a small fishing village in the Algarve.

We had already a rather tight schema to stay in the village for only 2 days; and then we met Steve. Steve is an Englishman, living in Scotland and staying in Algarve for a long holiday. Steve is not your typical English tourist man who is loud and just loves to hang around on the beach and bars. He is deep, very interesting and knowledgeable and has deep passion for almost everything. Hans and I called him the walking encyclopedia.

He literally turned our plans outside down, and in so doing, gave us one of the most interesting experiences we have ever had!

It was a beautiful Thursday morning when we met Steve. After making a short stroll at Praia Pescadores where fishermen do their daily works, and watching the boats, Hans and I started our hike. 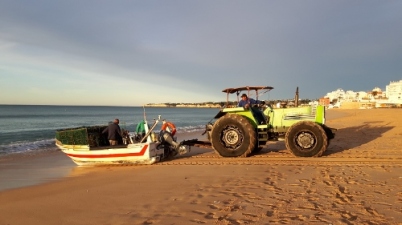 The fishermen at Armação da Pera

We were planning to go as far as Senora da Rocha which is about 3 kilometers away from our camping site.

Views at Armação da Pera, seen during the hike

We were already more than halfway when at one point, we were a bit confused which way to take, and then out of the blue, appeared Steve. He kindly and willingly provided us information about the hike and about the area. From one topic came another; we lost track of the time and were mindless of the many walkers that passed us by. We stayed there on top of the cliff, with wonderful views of the beach below us, talking about almost everything under the beautiful shining sun that day!

It was already late and there was no way to go to Senora da Rocha anymore. Steve went with us back to town and invited him to have a drink with us, which he gladly accepted. After again more than an hour of talking, we made plans with him to drop by at his hotel the following morning, after we have been to Senora da Rocha. So the next day, Hans and I made an early start. At 9.30 we made our way to Senora da Rocha, which took us almost an hour to reach. Senora da Rocha is a small chapel nestled at the tip of a cliff and found near the beach with the same name. 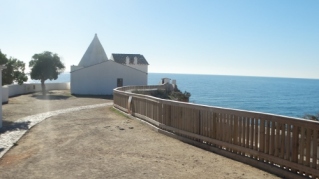 After that, we searched for the hotel where Steve was staying and drank coffee with him. It was a very nice and friendly atmospehere. The three of us got to know each other better as topics sometimes became a little personal.  We talked almost everything, from simple things as cars to more complex such as politics, world history and even plants! And believe me, Steve was amazing! He almost knew everything! 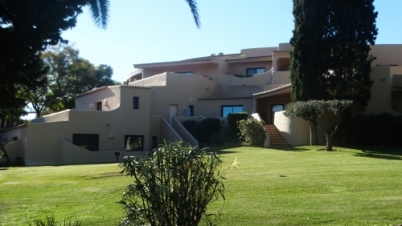 Even scientific names of some plants I’ve never heard of before! As we were planning to leave, he suggested we take a visit to the gardens of the two exclusive resorts nearby, Vila Vita Park and Vila Lara. We gladly accepted, so the three of us went on our way. As the two resorts are exclusives, Steve did the talking of trying to get us inside. He had a very clever trick, saying we would like to go to the reception and there asked for permission to walk around in the gardens.

And so there we were, roaming around the gardens of these two exclusive resorts for almost two hours! We saw a lot of new plants such as Medronheiro or Strawberry Tree where the famous Portuguese liquor comes from, the Medronho, the Brazilian tree Pitanga with its sweet fruit, yellow cassia, brugmansia, among others. We had fun collecting seeds that fell on the grounds and at one point, secretly cutting off a twig or two in the hope of growing them ourselves.

Exotic plants in the gardens of the resorts

The personnels of these two resorts were equally attentive, polite and helpful. One even took the time of explaining to us about a certain type of plant. It was a very interesting and informative afternoon for us. It was like having a botanical lesson and tour with Steve as our professor!

It was difficult to say goodbye after almost two days of hanging out together. Hoever it was getting late. Time to part ways. Steve invited us to go back to his hotel and share a meal with him. He cooked it himself – a Nan or simple bread, a soup and cabbage stew. It was simple meal, shared among good friends in a very relaxed and friendly atmosphere.  But all comes to an end. After the meal, we said goodbye; we received an open invitation to visit him one time in Scotland. Steve walked with us as far as Intermache supermarket where he had to get somethings, and then we parted ways!  We walked another half an hour, in that dark and cold night (we had short pants and no jackets with us as we didn’t expect to be still out at this time!). It was a long day;  we were truly exhausted when we got home; but we were glad and felt privileged to know a special person.

***Steve, thank you for your time, the nice memories, and your friendship! We might not have explored the village the way we wanted to, but meeting and spending quality times with you was far better than that! 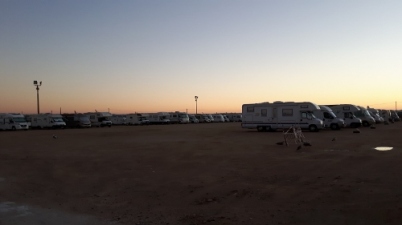 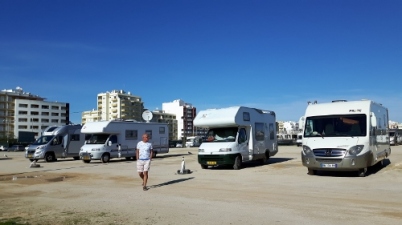 It is a rather spacious parking area just opposite the Praia Pescadores. Parking costs 1.50 euro per day. There is water and a possibility to empty chemical toilets. Village center is about 200 meters.

Our customary picture together (Steve didn’t want to be photographed)