We came to Ferragudo by chance! Hans and I were taking our long stroll on the beach promenade at Praia da Rocha in Portimao. When we arrived at Santa Catarina Fort, we saw campers parked at the other side of the sea. We thought, hhmmm, they are nicely stationed there than where we were at that moment. So we decided to go there the following day!

THE VILLAGE OF FERRAGUDO

Ferragudo is like a breath of fresh air, after visiting Portimao. Though only 5 kilometers from the busy city, Ferragudo, which is already part of the municipality of Lagoa, is a totally different place! Gone are the high-rising buildings; gone are the empty hotels; gone are the numerous cafes and souvenir shops! What we saw is a quiet fishing village; a village with a normally-sized main square which is the melting point of the locals; a village where people still know their neighbours and have moments to spare for a chat; a village with a charming bay where local fishing boats are anchored and where local fishermen still work on their traditional manner. 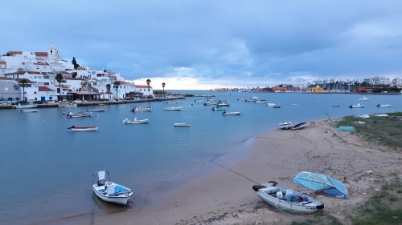 The best way to explore this charming village is by foot, which we actually did. Our walk started at our campsite by the river estuary, then we crossed a small bridge that leads to the water front and to the main square. But just before the bridge, we found a small charity store where I was able to buy 11 pocket books for only 3 euros! To continue, we decided to take the way to the main square.

It is a place where a couple of good restaurants are located; an ideal place to have a cup of coffee while deciding what to have for dinner . After that, we walked along the narrow cobbled streets which are lined up by small white washed houses, some of which are already abandoned, for sale or being renovated. The walk was becoming a little steep, until we reached the highest part of the hill where the village church, Our Lady of the Conception.  From here, we had a grand view of the city of Portimao and of course, our campsite! 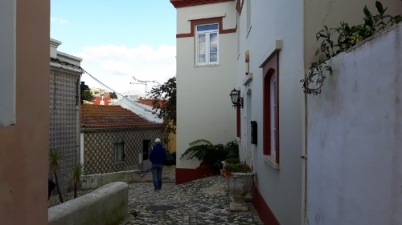 View from the village church

As we wanted to go down to the beach a lot faster, we did not take the normal way. We climbed over a low fence, thinking that it would bring us faster to the beach below us. We were wrong! We found out later that we were trespassing as the grounds next to the church was a private property. An old man asked if he could help us and what we were doing there! Admitting that we climbed over the fence, he informed us it was private grounds. He then opened the gate for us, and we left the area with full of embarrassment!

Anyway we finally found the small path that leads to the beach of Praia Angrinha. It is just a small beach where small fishermen’s huts are also located. At the eastern side of the beach stands the Fort Sao Jaoa. 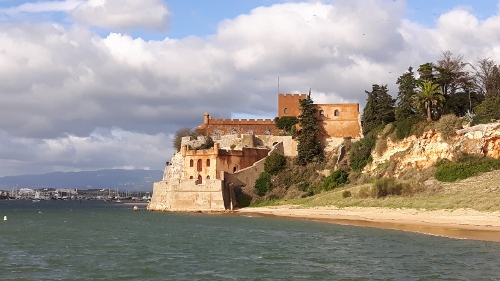 The beach, which was also deserted at that time, was quite a nice big one. There are two restaurants, one was closed at that time. We did not stay here for long as we needed to return back to the camper because we feared that it would rain any moment and I still had my laundry hanging outside the camper! So we did a hasty return to the campsite, passing quickly along the waterfront, smelling the savoury aroma that came from the restaurants there. Luckily, we returned in our camper  just in time before the rain fell!

Ferragudo has been tipped as Algarve’s new hotspot! Does it mean that they will convert the village into one of those touristic attractions along the coast? Does it mean more commercial buildings and hotels will be built in the area? Does it mean more pubs and recreational spaces in the center?  I hope for the sake of the village that it would not be the case.  Though development  is always a welcome change, it should  not be to the extent of losing the village’s authenticity and identity. It should not be to the extent of losing the traditions that people have been practicing for many years. It should not be detrimental to the living conditions of the people and it should not threaten the way of life of the local people.

Ferragudo as the new hotspot of Algarve? Why not? As long as the village retain its authenticity and not be destroyed by the massa tourism and the local people benefit from the so-called change!

It is a spacious open grounds located at the river estuary, overlooking the village of Ferragudo on the left side, and the city of Portimao on the right side. The views are beautiful, especially at night. There are no other facilites. Village center is about 200 meters. They were saying that there are plans to convert this area into another marina. We don’t know if there is a truth to this, but if that is so, it would not be beneficial for the small local fishermen who are still practicing their craft at the water front. Another marina, haven’t they have more than enough in Portimao???