Lagos rocks with its Rocks!

If you are planning to tour Algarve, make sure you include Lagos in your itinerary! Lagos, situated in the western coast of the Algarve region in Portugal, is not only historic; it is also charming, lively, and beautiful! And what makes Lagos extra special are the rock formations found on its coastline. These rock formations are unique, spectacular and simply breathtaking!

We have visited Lagos 12 years ago but we vaguely remember our visit. We have been to Ponta da Piedade, but apparently we have not seen the whole of it. We were amazed and speechless when we saw it again, after 12 years!  We found it so fascinatingly beautiful that we visited the place two times during our 3 days stay in Lagos.

Ponta da Piedade, contrary to what many people know, is not a beach. It is a series of high cliffs that are lined up with beautifully-formed rocks, sea caves and arches. The limestone rocks acquired their almost golden to red yellow due to years of oxidation and physical weathering. There is a steep concrete steps that leads down to the water where boatmen wait for tourists wanting to tour the place (if the weather is good). 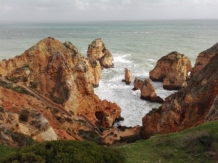 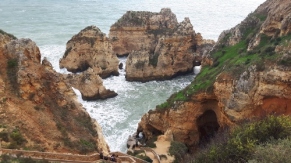 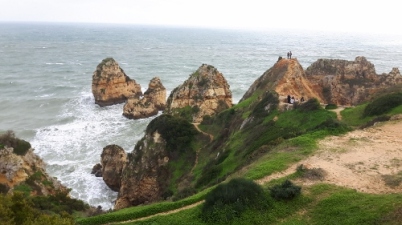 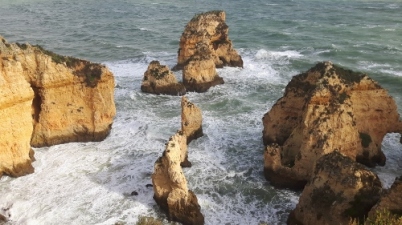 It was a windy day when we first drove to Ponta da Piedade. The sea was turbulent and the waves were so terribly wild that they crashed and broke at the huge rocks. Waters splashed even to the foot of the stairs, making it impossible for people to have a tour at that day!

However, the weather was a lot better when we returned two days later. The sea was calm; the water had a deep blue and aquamarine colors; and boats were again part of the already postcard-perfect picture of the place!  Ponta da Piedade is surely one of the most beautiful places we have visited in the Algarve. 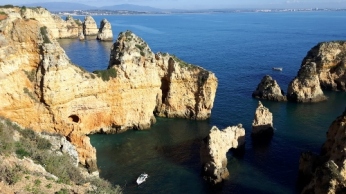 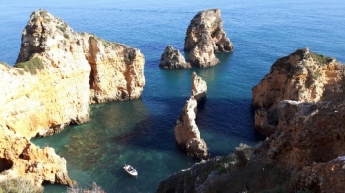 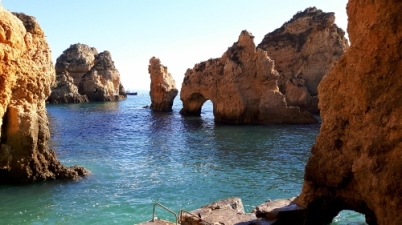 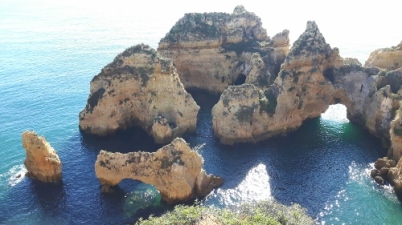 Praia Dona Ana is a small romantic beach located about 1.5 from Ponta de Piedade.  It has fine golden colored sand and beautiful rock outcrops which seem to spring out from the water. The best view is from the top of the steps that leads down to the beach. 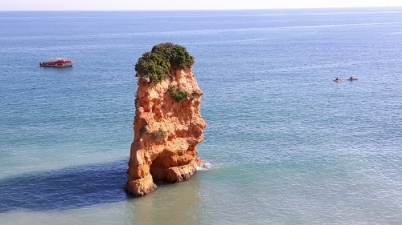 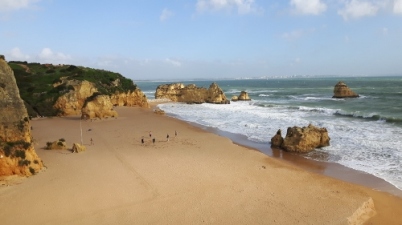 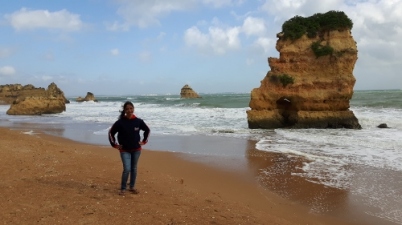 Situated just less than a kilometre away from ponta de Piedade is the tiny beach of Camilo. It can be reached  by going down  a steep winding  wooden stairs with at least 200 steps! The beach is surrounded by high cliffs and beautiful rock formations which shelter it from chilly wind. There is a small tunnel carved out from the big rock which gives access to the northern part of the beach. 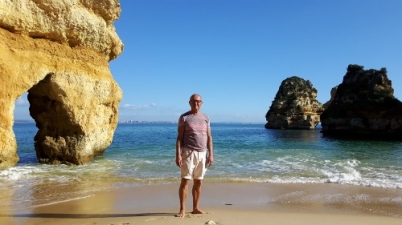 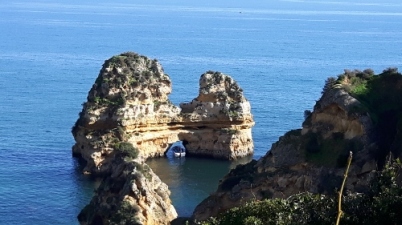 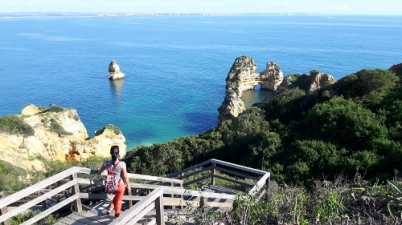 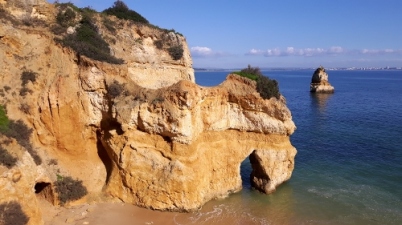 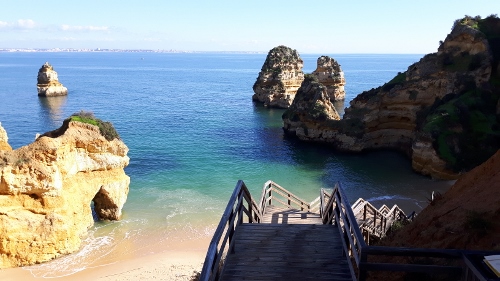 You receive a red-carpet treatment upon walking in in the old historic city of Lagos. Red carpets are lined up at the narrow maze-like  streets of the old center. To explore the old town, the trick is just to walk on the red carpet and you will arrive at most of the old city’s important buildings and monuments such as  the Slave market, the churches of Santo Antonio, San Sebastian and Santa Maria, Governor’s Castle and of course, the Ponta da Bandeira Fort. Lined up on both sides of the old city’s narrow streets are lots of souvenir shops, small cafes, cozy restaurants and some English pubs. So if you want to feel like a star, walk the Red Carpet in Lagos! 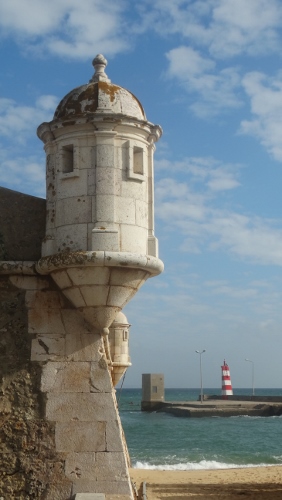 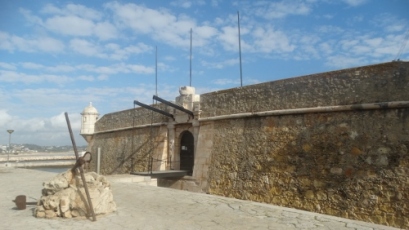 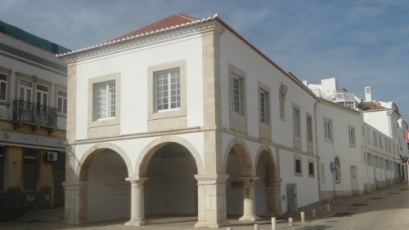 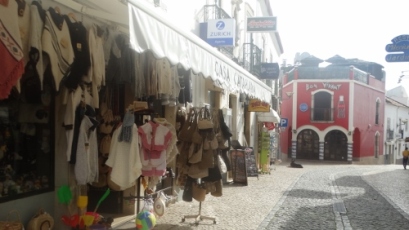 And if you are tired from walking the red carpet, stretch your legs or take a rest at the long boulevard where you get to see the views of the sea, the fishing harbour, and the marina. 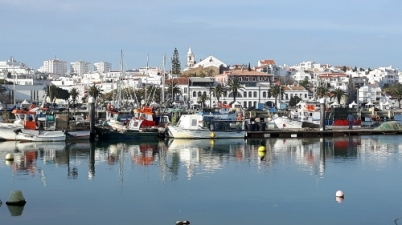 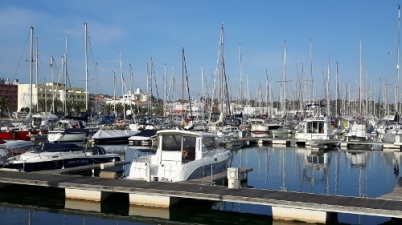 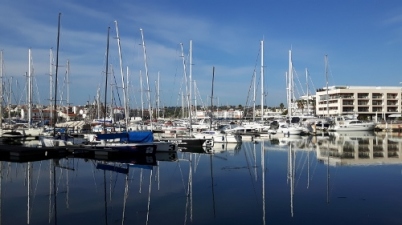 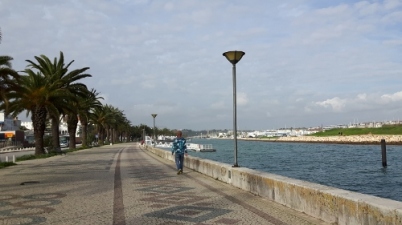 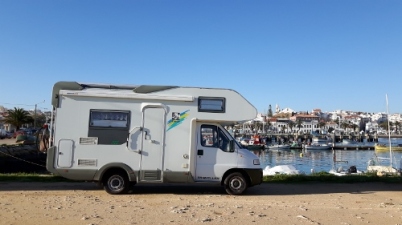 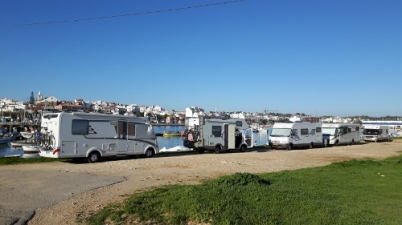 It is a rather spacious parking lot by the fish port. There is a signboard that parking here is prohibited. Police drove around regularly  and didn’t say anything. Maybe they tolerate it during the winter months. Marina de Lagos with lots of cafes and restaurants is about 250 meters;  city center is about 300 meters, crossing a pedestrian bridge from the Marina to the other side of the river. 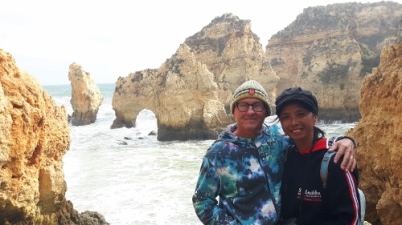 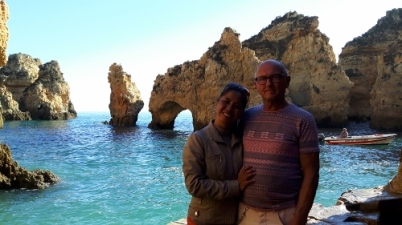 Our pictures together at Ponta de Piedade