We have been to the wonderful city of Salamance twice : the first time was during our first great escape in 2015 during which we were able to explore the city; and the second time was this year, November 2016, when we had to make an emergency stop after we had a flat tire on our way to La Alberca.

We have just left the city of Valladolid and was still 30 kilometers to Salamanca where we planned to make a short stay to do some groceries at Mercadona when the right back wheel of our camper went flat! We had to stop by A62 and Hans had to change the tire there. Afterwards, we drove to Euromaster in Salamanca to buy some spare tire, but they didn’t have it there so we went to another shop nearby. We could be attended to after the siesta, so we took the time to do some groceries at Mercadona. At 16.00, we had two new tires, so drove further to our target destination in La Alberca, a small mountain village 75 kilometers south of Salamanca.

Though we didn’t explore the city of Salamanca the second time that we were here, let me just share to you what we have experienced on the first time, about 1.5 years ago. Here it is….

As much as we wanted to stay in Sevilla a little longer, again time constraints prevented us from doing so. We have to go back to Holland. Our planned stay in Sevilla was already extended for one day. We would have loved to experience the Fiesta de Abril but unfortunately we had to go further. And so we went, one Monday morning, April 20 in the direction of Salamanca. It was a 465 km-drive and we took the A-66 or the Autovia Ruta dela Plata all the way from Sevilla to Salamanca. The name Ruta dela Plata had its origin  from the old silver road where during the conquestadores years, the road was used to transport looted silver from America and brought to Sevilla. It was a very wonderful and exciting drive, not so busy and the landscape was varied. One moment we were driving and passing thru mountains and hills, the next with views of lakes and rivers and nice bridges, and still the next with so much trees and vegetation. It was pure enjoyment! After almost 8 hours, (with one hour rest in between), we finally reached the city of Salamanca.  We were planning to camp in a mix parking half kilometre from the old center, (which we found in the NKC app) under a viaduct where  couple of motorhomes also camped, but after examining the place, we found it not so safe, so we drove a bit around until we found a quiet parking near the Parque Miguel Dibeles. At that time , there was also one Dutch camper in the parking. 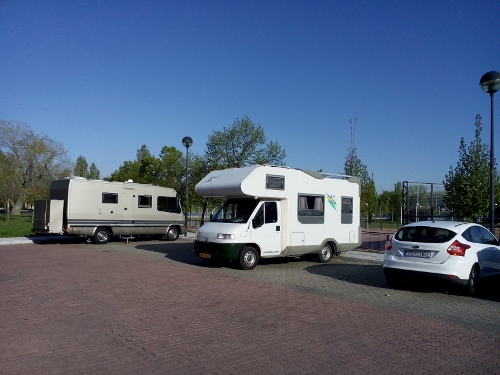 Just like what I have already stated, it is a small parking by Parque Miguel Dibeles, opposite Repsol tankstation. It is about 300 meters from the old city center which can be reached via stroll along the park and crossing the Rio Tormes using  the famous pedestrian bridge, the Puente Romano. 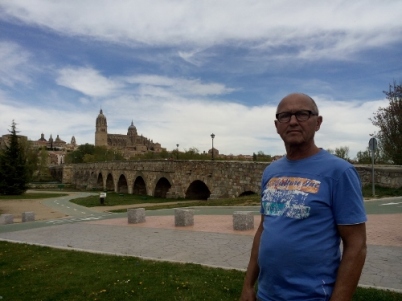 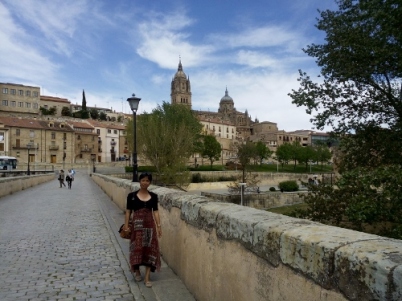 The old city of Salamanca was declared a UNESCO World Heritage Site in 1988. It is one of the most important university cities in Spain and supplies 16% of Spain’s market for the teaching of the Spanish language .Salamanca attracts thousands of international students, generating a diverse environment, thus making the city a lively and exciting one.

On our first day here, we immediately went to the Tourist Office, just like we normally do and asked for some useful tourist information. It was a Tuesday, and we learned that there are various sites which we could visit for free from 10-12.00. These are the Cathedral of Salamanca, the Tower of the Cathedral and the towers of La Clerecia. Now we had to be quick as we only had a little more than an hour to do so.

We immediately  went to La Clerecia building to visit the Towers. La Clerecia is the home to Salamanca’s Pontificia University; and the towers are open to public. Normally the entrance fee is 3eu pp, but because it was Tuesday, we went in free. We climbed the stairs in going to the towers. Once on top, we were rewarded with a magnificent views of the city of Salamanca, including the nearby gothic cathedral.  After absorbing the beauty of it all and making some mandatory pictures, we then climbed down to go to the Cathedral.

The Cathedrals of Salamanca

When we speak of the Cathedral of Salamanca we are referring specifically to two churches joined together. On one hand, there is the Old Cathedral dating from the 12th-13th centuries, and on the other, the New one from the 16th century. The new Cathedral was built in 1512 to help stabilize the deteriorating Old Cathedral. The Old Cathedral has very old tombs of the bishops and members of the nobility. It has also a remarkable Main Altar and small chapels scattered around the place.

The new cathedral on the other hand, houses the image of the Virgin of the Assumption, and a very remarkable choir seats. The entrance fee for these two cathedrals is 4.75pp but we had to pay only 2 euro for the use of the audioguide. The cathedrals of Salamanca is by far one of the most impressive cathedrals I have ever seen in my trip. Really a must to see in Salamanca. The other monument which we could visit for free on Tuesday morning was the Las Torres Medievales, the tower found at the side of the Old Cathedral. It was already past 12.00 when we were finished at the Cathedral and we had to pay 3 europp to visit the tower. 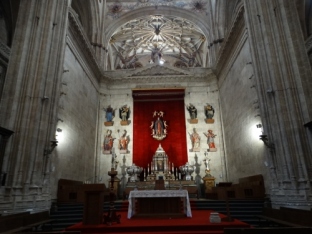 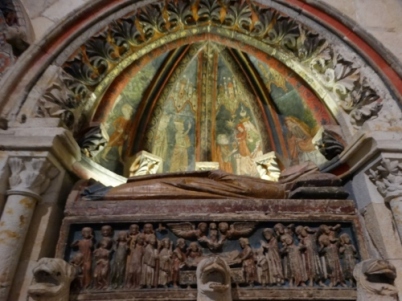 After having visited the abovementioned monuments for free, we spent the rest of our stay in Salamanca by touring the rest of the city in our own relaxed tempo. Among the other sights which we visited were the Casa delas Conchas, Plaza Mayor, Convento de San Esteban, Puente Romano and the Huerto de Calixto y Melibea.

The Casa delas Conchas is remarkable because of its façade which is decorated with about 300 shells. It was built from 1493 to 1517 by Rodrigo Arias de Maldonado, a knight of the Order of Santiago de Compostela, which explained the seashell decorations. At present it houses the public library. 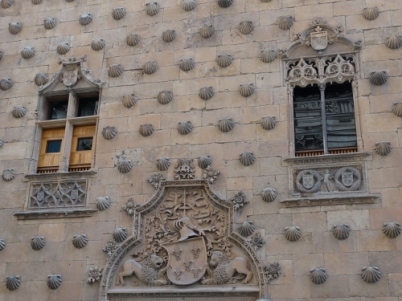 Plaza Mayor is a very impressive main square of the city, built in traditional Spanish baroque style, and a favorite gathering place of the city. It is lined up with different restaurants, ice cream parlors, small shops, tourist shops and a pharmacy. The City hall is to be recognized because of the arcs and clock tower. 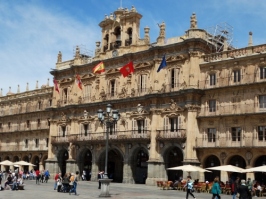 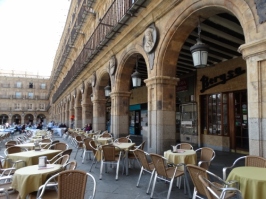 Another impressive religious building which we visited was the Convento y Iglesia de San Esteban. This is a Dominican convent and church; had to pay 3 euro pp for entry. It is also a very impressive building and a must to see in Salamanca. Inside the convent is a very big inner courtyard garden where you can stroll around in all tranquility. There is a very impressive stairs that leads to the second floor where the museum is located. The museum houses some really precious collection of arts, paintings and sculptures. I have brought here a nice religious bracelet for myself, because the one I have brought in Lisieux was damaged. There is also an entry to the choir seats on the second floor, where one can have a magnificent view of the Altar. The choir itself is also quite a sight, typical of old grand choir seats I have earlier seen in some cathedrals. Going down to the ground floor, we entered the church, which looked really solemn ,holy, and spectacular, with its grand altar. There are mirrors placed at some strategic points along the pathways that allowed the visitor to see and admire the beautiful arcs at the top without cramping the necks. 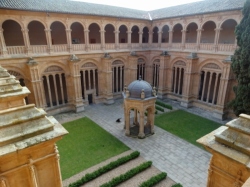 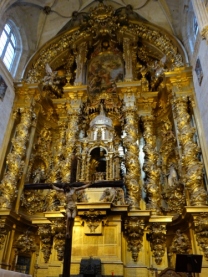 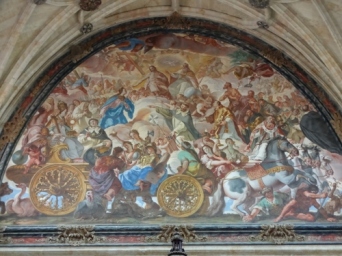 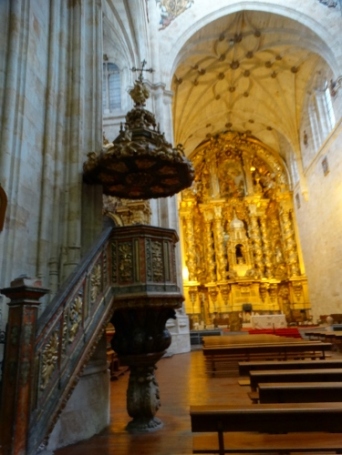 After seeing some, if not all, of Salamanca’s impressive monumental buildings, Hans And I strolled to one of the parks in the city, the Huerto de Calixto y Melibea, which is found at the rear right side of the cathedral. It is a small park, filled with lovely flowers and shrubs and has an amazing views of the cathedrals and the road a bit down . It was nice to have a quiet stroll here, although I noticed it was also a sort of hang out place of young people.

To top it all, our visit in Salamanca would not be complete without going to one of its bars to have a drink and watch football. We watched two football matches here, FC Barcelona and Real madrid, on two different occassions and in two different bars. Being a student city, bars are affluent and not expensive. We spent only about 7-10 euro for a night of football and some drinks with tapas!

Sadly, we did not have visit or tour to the different buildings of Salamanca University, which made the city also famous, as we had to pay 10 euro pp for the visit (we’re running out of funds J) But nevertheless, we could say that from what we have seen and experienced, we could say that Salamnca is simply one of the nest cities in Spain, which offer the visitors not only a taste of culture, but also history, gastronomy, hospitality and life!