The Geiranger-Trollstigen National Tourist Route is located in Road 63 which is a 106-kilometer road that stretches from Geiranger to Andalsnes. Along the way, there are a number of viewing points which give the traveller the needed stop to admire the breathtaking views the road offers. And breathtaking they are! The road comprises of varied awesome landscapes that leave the travellers totally speechless and spell-bound. Majestic mountain ranges and snow-capped mountain tops, even in late July, cascading waterfalls, deep ravines, narrow winding roads, green and lush mountains, idyllic villages with strawberry fields, running rivers, and sometimes, crossing farm animals are just among the many things that make the road so special as it is!

It is for these reasons that Hans and I planned our route in a way that we would be driving in this road. And so we did, after more than 7 weeks of travelling around Norway, the time has come to pass this road.  Beginning from Andalsnes, we were fervently praying and hoping for a nice weather so that we could enjoy the road trip. It was already raining the past couple of days, and the day that we should be driving up was also not so promising, as dark clouds were hanging in the sky. Anyway, when it cleared a bit, we were raring to go. Off to Rv  63, to Trollstigen.

Trollstigen, or The Troll’s Ladder is an impressive road which snakes its way around 11 sharp hairpin bends along steep mountain sides, surrounded by cascading waterfalls. This road from Valldal to Andalsnes was constructed in 8 years time, beginning in 1928, and ending in 1936.

At the base of Trollstigen (Trollsfoten) is a rather big parking area where one has a good view of the whole road and of The Stigsfossen waterfalls  and give the driver an idea of where he would be driving to. Even at the foot of the Trollstigen, the view is already mind-dazzling! It is about 12 kilometers from Andalsnes to this foot of Trollstigen. Here we were confronted of where we would be driving. We saw how vehicles, small and big alike, maneuvered themselves thru the sharp curves of the road, appearing like snakes, slowly crawling up and down the road.

When it was our time to drive on, Hans was really very careful, alert and paying close attention to the traffic. It was a crazy experience! Even the navigator was going crazy with all the curves. The higher we came, the thicker the clouds became, until there were moments that we couldn’t see anything anymore. Literally zero visibility because of the thick fog!  Luckily, we safely arrived at the Trollstigen Plateau, about 700 meters high, where the Trollstigen parking area,  a restaurant, shop and information center are also located. It was already 4 in the afternoon.  Normally it was still early for us, but considering that the fog was really very thick, and we did not have any clue of what the road ahead of us is, we decided to stay the night at the parking area, wait for the fog to disappear and the sky to clear up, and hopefully have a good view the following day of the Trollstigen  as seen from the viewing platform, which hangs 200 meters high over the mountain.

It rained the whole night. And I was praying, let it all fall down tonight so that tomorrow would be a clear good day for viewing. Maybe my prayer was answered. Early the next day, after breakfast, around 8.30, Hans and I walked up to the viewing platform. Though there were a bit of rain showers, the sky was a bit clear, and also changed very quickly, from cloudy to clear to rainy. Luckily, it was clear when we arrived at the platform. We were at first alone there, so we had the chance to take some good pictures. 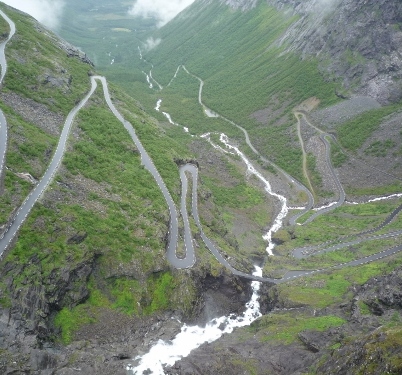 The view was really amazing! Mind-blowing! We could clearly see where we have driven the day before, how crazy it was! And we saw from above how the other vehicles drove up and down the road! We had magnificent views of the mountain peaks, the Stigsfossen waterfalls and the road itself!  We were glad we waited a day more to see this, otherwise we would be sorry! After about 15 minutes, many tourists began to arrive also. After about half an hour, it was time to go and continue our road trip.

After the mind-blowing Trollstigen, we came to a different more relaxed stopover, this time in Gudbrandsjuvet canyon. It is an impressive system of rock pools forming a 5 meter wide approximately 20 meter deep canyon thru which the river flows. It is about 20 kilometers from Trollstigen, and the road was gradually going down at this point. There is a reasonably-sized parking area before the canyon. There is a winding pathway made of wood and steel that offers the visitors a good view of the falls, and see how harsh the waters fall down! At the end of the walkway, there is a small café and souvenir shop, and also toilets. It was such a pleasant reliever after the mind-blowing sight at Trollstigen. 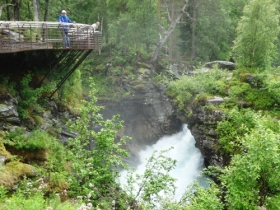 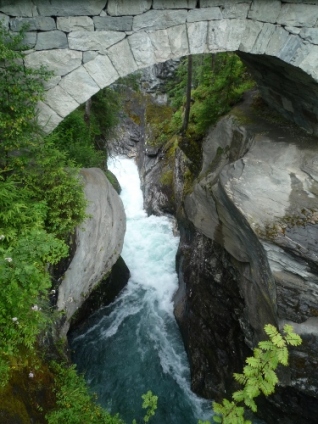 Along the way, we have also passed another small waterfalls, the Hoelfossen. It is not so touristic, in fact, it is hardly noticeable from the road. The area is managed by local farming group. From atop, the waters are gradually being led to kind of dam, then the water falls down to the other part of the road, passing through under the old bridge. We had our coffee break and lunch break here, and also spent some times in picking up wild blueberries.

The Ornesvingen or The Eagle’s Bend is also a long and winding road 7 kilometer from the village of Geiranger. Just like the Trollstigen, there are also 11 hairspin sharp bends or curves, but they are not so scary, long and as high as Trollstigen. At the top of the bend is a viewpoint, quite crap and crowded, that cars should park at the limited space along the road. There is a very spectacular view of Geiranger and the fjords from this point. 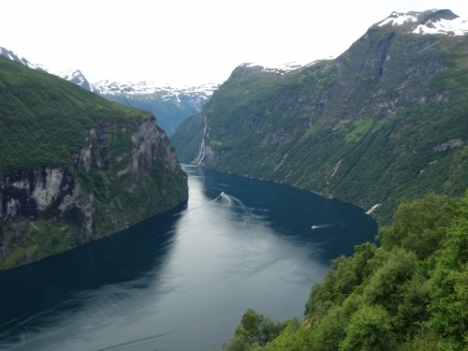 Flydalsjuvet canyon is located about 5 kilometers away from Geiranger village. There is a really nice viewing platform in this point which offers another spectacular views of the canyon, the Geiranger village and fjord. The parking is quite messy, we had a rather hard time to choose where to park. It is also busy as tour buses stop here to drop hordes of tourists for the view. We did not stay long in this area; after a couple of shots, we drove again on to our next destination.

We chanced upon this beautiful place on our way to Dalsnibba. It was quite a long day, after hiking another 5 hours that day, and still on the road. So when we saw this place, we decided to stay the night here, before going up to Dalsnibba. Djupvassnet lake is situated at the foot of Dalsnibba road, about 1030 meters above sea level.  The lake has a nice deep blue color, sometimes a little greenish. There are still some snow lying on the grounds around the lake, and also at some parts of the mountains; also snow floating on the waters.  We stayed here and did a short stroll in the vicinity of the lake and up to the tourist hut nearby. We had a quiet night, woke up the following day quite rested and ready for a new driving adventure. 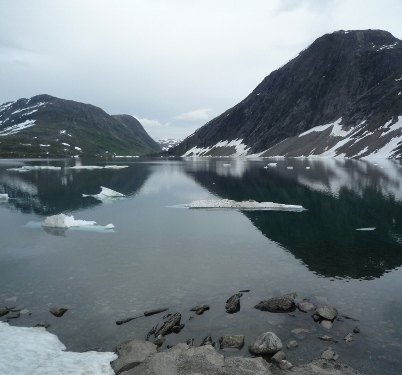 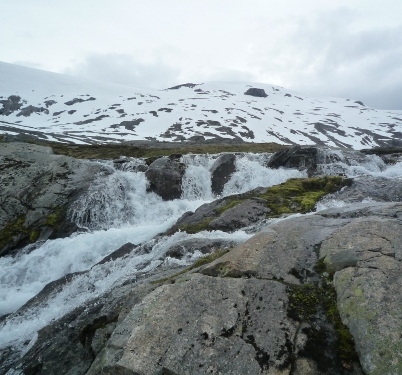 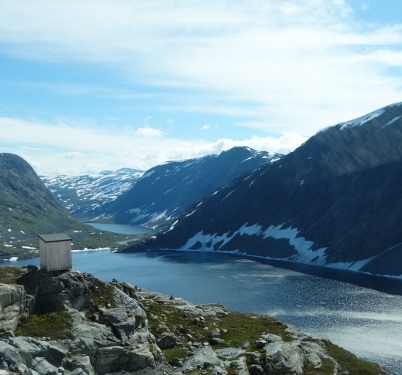 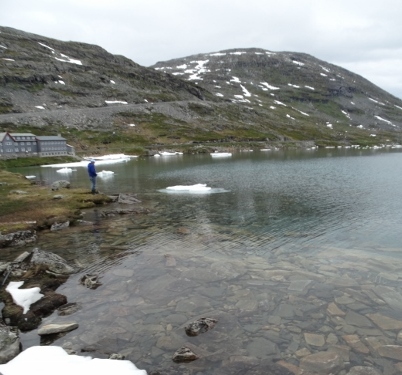 Dalsnibba, which is situated 1500 meters high above sea level, is considered Europe’s highest fjord view from a road. This is quite a finale in our road trip to RV 63! From Rv 63, we turned left and entered the Nibbevegen, which is a 5 kilometer-toll road in going up to Dalsnibba plateau (toll fee is 110 NOK). The road was a bit scary and exciting. All the way, we had wonderful views of the mountains around us, some  peaks were still covered with light snow.  After a 7-minute drive, we arrived at the plateau. There is a rather big parking  area  on top, with café, souvenir shop and toilet. I bought here a nice Dalsnibba sweater for only 159 NOK and Hans, a Troll figure for 219 NOK. It was not yet busy at this time.

Really, the views from here were Magnificent! We were so in awe that we spent just the first 15 minutes admiring the views. There were majestic  views of the snow-caped mountains, so high from our location and spectacular views of Geiranger fjord so far below us! And the weather was really cooperating this day too! The sky was blue, with nice white clouds floating around. The sun was also showing his power after many days of absence. A top day to visit Dalsnibba! After a while, time for some serious picture taking.  Tourists started to arrive, in cars, big tour buses, motors, bicycles and even by foot!  Hans and I spent our coffee break here. After more than an hour, we drove down again, back to Road 63, continuing our journey further going down, thus ending our road trip! 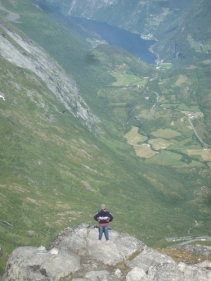 But this is a road trip that we will remember for the rest of our lives! Our deep admiration for the road workers who constructed such roads as The Trollstigen and Dalsnibba road. They have created such roads with extreme expertise and precision, defying the dangers and other adversities that  literally came alongside with their construction. This is such a road trip that started with a BANG and ended with an EXPLOSION!

OUR CUSTOMARY PICTURES TOGETHER 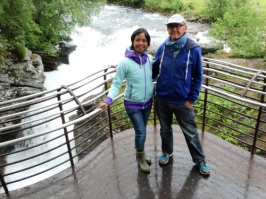 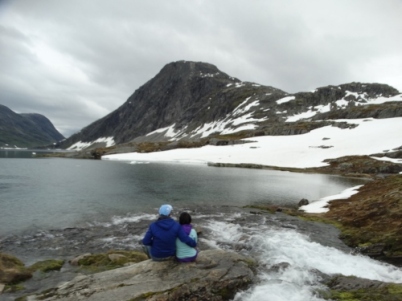