After staying four days in Frigiliana, we drove down to Torrox. It was again an exciting drive, as we took the route thru the mountains of Alhama and Almijara and passed by Puerte Verde. It was a combination of steep, narrow and winding roads which made me really nervous. It was only a 16 km drive, but it looked like it lasted an eternity. Arriving at Torrox, we turned left to a parking place which was not a good idea, as it was a one-way street and dead end and the only way to get out is to go up a very steep road. We didn’t go up, but instead drove back against the traffic, and a little further we came across a big public parking area, after the Carril de Circumvalacion. We stayed there for only a night.

One Night Stay In Torrox

We parked our camper at the public parking area just before entering Torrox. From there is just a short 300 meter to the center. It was only 14.00 when we arrived, enough time to see the town, which we did. And what we saw did not appeal to us much. Sure, it has a little similarity to Frigiliana with respect to whitewashed houses and winding streets. But that’s it. We found the village to be crap and dirty and unappealing. We decided to just stay the night and leave the next day. But not without watching a football match in a local café , Real Madrid vs FC Barcelona.

From Torrox, we drove 14 kilometers up to the mountains of Almijara and Tejeda to get to Competa. Competa is a bit known to us because Hans was also looking for a house to rent in this area, so we both wanted to see how the village is. 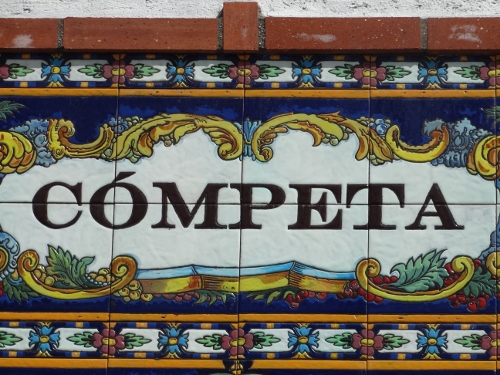 Competa , the Jewel of the Costa del Sol, is a small village in the mountains situated at the foot of the mountains Sierra Almijara-Alhama y Tejeda. It is about 20 kms from the coast of Costa del Sol. From Torrox it is about 13.5 km drive thru winding and narrow concrete roads. Before entering the village, there is a Lookout Point designed with ceramic murals and  benches. From here one has a magnificent view of the white village of Competa.

We had to park three times before we found a good parking in the village. First was beside the Parques Infantile, second is by the Municipal Deportivo and last is at the parking at La Fabrica which is opposite a flowershop at Camino de Archez. We stayed here for three days, from March 23-25, 2015.

Hans and I obtained a map of the village and a hiker’s route (1 euro) at the Tourist office. It was 12.00, so we did a quick walk along the village, that’s why we saw those two other parking places, had lunch at a local restaurant (menu for the day at 8 euro pp , three courses), and after that took some rest in the camper, as it began to rain. After the rain, it was almost 18.30, we did a night stroll in the village center and got ourselves lost in the small streets. 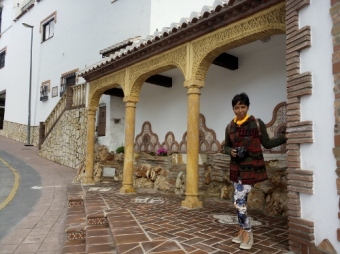 The next day, it was a good one, the sun was shining. Hans and I got ready for a hike doing the 7 km Ruta dela Acequia. It was a hike along the old irrigation canals of the village, passing the many olive trees and walking thru small foothpaths; and along the way, having the most wonderful views of the surrounding villages, the depths of valleys and the mountains of Tejeda. It was fun, the temperature was ideal. We had no problem at all, until we reached the nearby village of Canillas de Albaida. The signs got difficult, the arrow disappeared. It was getting late. What used to be just a 2 hour hike became 4 hours, the fun became less as we had no choice but to take the same paths we took the first time. 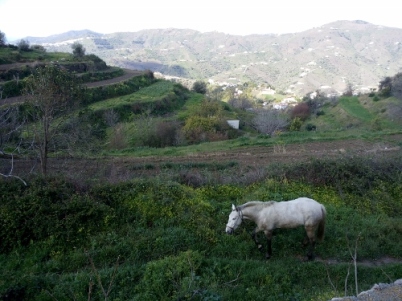 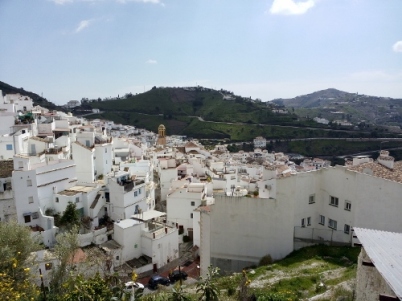 We ended up at the village plaza, the Plaza Almijara, where we had some rest and visited the Paseo delas Tradiciones, a passage beside the church which depicts the traditions of the village thru ceramics paintings.

Later in that afternoon, we walked around the village again, discovering its secret nooks and corners. Just like Frigiliana, the houses in Competa are also whitewashed, the doors adorned with flowery plants and the walls decorated with beautiful ceramic pots. The streets are also narrow and winding. It is also like you are in a maze, where you have no idea where you are and where the street will bring you. 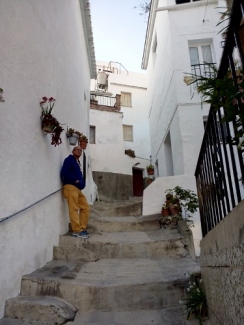 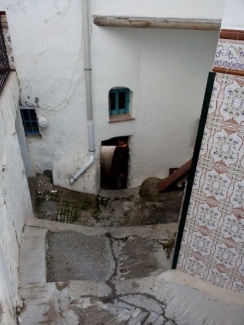 But unlike Frigiliana, Competa has more to offer in terms of amenities. It is bigger and more multicultural, thus it has more restaurants, supermarkets and shops; without losing the Spanish charms.