Holy Week, or Semana Santa as the Spaniards call it, is the commemmoration of the sufferrings, death and resurrection of our Jesus Christ. It is annual religious happening that is much-awaited, observed  and celebrated with so much devotion by the people of Spain. Orihuela, a town located in the southern part of the Valencian community, is one place where Semana Santa is observed with so much passion and devotion by the people. As such, it is declared as an International Tourist Event and one of the oldest religious and popular celebration in this south east area of Spain. The week-long celebration is participated by many of the town’s Brotherhoods or  religious organizations (Hermandad) whose presence are strongly felt during processions which are held daily (from Palm Sunday to Easter Sunday). It is a family event, where even the youngest member of the family, from toddler to pubers, all dressed in the brotherhood’s traditional costumes, join the processions. Different musical bands roam around the main streets, filling the town with the sound of their music. Two rows of wooden chairs are aligned along the procession routes where the spectators can sit while watching. The first row is free for the Hermandad, and the second costs 3 euro per chair on Wednesday and Thursday, and 5 euro on Good Friday.  Banners of different Brotherhoods hang on the balcons of the houses/apartments. Most of the churches are open even at late hours to give the devotees ample time for visita iglesia. All in all, the whole town is one opem theatre during the Semana Santa.

Semana santa is almost synonymous to processions. In Orihuela, procession is held everyday during the Holy Week. Each procession is different from the other; each has its own theme and uniqueness. We arrived in Orihuela on Maundy Thursday, so we were able to watch the processions from Thursday up to Easter Sunday!

The Procession del Silencio (Procession of Silence), which is led by the Brotherhood of Silence, is a unique one, and it was the first time that we have seen such a solemn procession. It started at 11.00 in the evening, then all the street lights where the procession should pass are turned off, even the lights on the houses. The whole town is enveloped in complete darkness. Two long lines of devotees (members of Hermandad del Silencio), dressed in their black hooded gowns, with covered heads, holding lighted lanterns, walked along the procession route in total silence. Some of the devotees carried a wooden cross during the whole event, in barefoot! The only religious figure during this procession was the El Cristo del Consuelo ( The Christ of Comfort).  The people stood up as the figure passed by, as a way of respect.  The lights were turned on again when the procession is finished.

The procession on Good Friday in Orihuela is the longest procession we have ever seen so far! It started at around 7 in te evening and lasted until 12.00 midnight! This rocession was participated by all the Holy Week Brotherhoods, and all the religious figures, depicting the last days of Jesus was part of the event.

All the members of the brotherhoods were dressed in their traditional costumes of white, yellow, pink, green, blue, red, violet and black gown with matching pointed hoods. The procession was participated by members from all ages, thus, including toddlers and children! The children distributed candies/sweets to the public during the event. 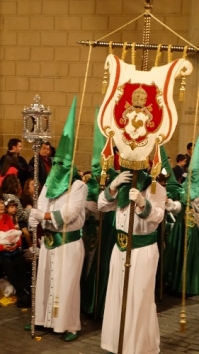 All the thrones of the religious figures were beautifully adorned with flowers and  magnificently lighted. Some of these thrones were carried by at least 50 members of the brotherhood. Music corpse were stationed in between the thrones, playing their sad music. Smell of incense filled the air. The people stood up to pay respect every time an important religioud figure passed by.   The procession started at Santuario de Monserrate and ended at Museo de Semana Santa, where most of the figures stayed for the next year. 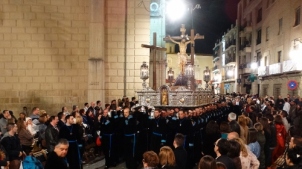 At around 12.30 in the morning, after the procession, most of the people of Orihuela waited by the Ayuntamiento to watch the return of the throne of Nuestro Padre Jesus Nazareno, the town’s patron saint. They clapped and shouted Viva Jesus Nazareno as the figure passed by.

The Black Saturday procession is about the burial of Jesus Christ. The procession which started at 7 pm is a joint activity of the Church and the Municipal council in Orihuela. There were only four religious figures during this procession : St. John The Baptist, Virgin dela Soledad, La Diablesa (Triumph over the Cross) and Santo Entierro del Cristo. It started at the Parish Church of Saints Just and Rufina. The male members of the brotherhoods were dressed in decent black suits while the female Mayordomas were dressed in black gowns with black veils. They were all holding lighted candles.  The throne of Santo Entierro  was carried by male devotees dressen in black gowns, followed by delegates led by the priest. It was truly a solemn procession; the people stood up to pay respect as the Santo Entierro passed by. 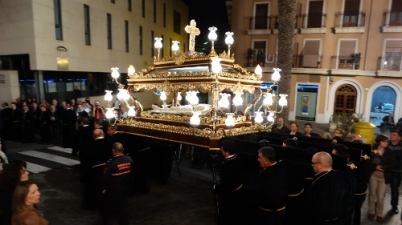 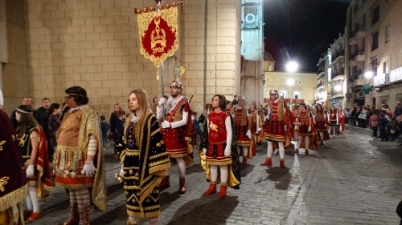 A couple of hours after Jesus’burial procession (which ended at 22.00), another procession took place. This time, it was about the Resurrection of Jesus Christ and His encounter with His Holy Mother, the Santissima Virgin Dolorosa. Devotees were dressed in white gowns; women carried the throne of Virgin Dolorosa, while men carried the throne of Jesus Resuscitado or Resurrected Christ. A music corpse accompanied the procession up to the place of Encuentro or “Salubong”which was done in Calle San Pascual. It was a very joyful Encounter as The Resurrected Christ met the Virgin Dolorosa. A child climbed up to the throne of the Virgin and pulled out the knife in her left chest, signifying the end of mourning and sorrow. Then it started to rain with confettis; joyful music filled the whole town; the sights and sounds of fireworks  were everywhere; and the devotees shouted and applauded with joy!  It was a festive way to end the Semana Santa.This happening ended at 03.30 in the morning. After that, the two religious figures  were brought back to the parish church where they were welcomed with merry sounds of drums. 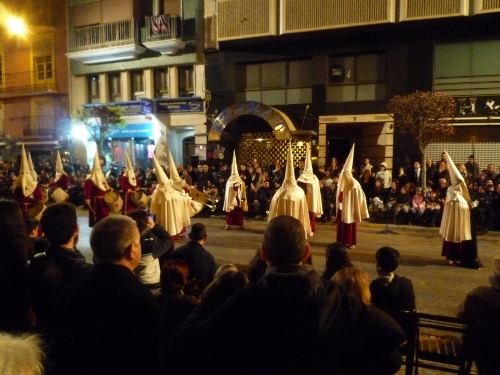 The presence of this Brotherhood was strongly felt during the Semana Santa. They were present in all processions, except Maundy Thursday. They marched their way, accompanied by lively music, at the starting point of every procession. The members were dressed  in centurion’s bright costumes : bright red capes worn over white under garments, with gold-plated helmets decorated with feathers in blue, orange, yellow and red colors; they have shoes in different colors of orange, red and green depending on their ranks; some of them were holding spears, swords or shields.  Even small children  were also dressed as small centurions, and they looked so adorable! 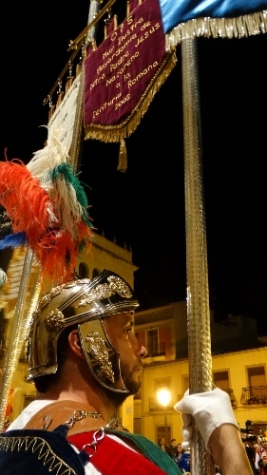 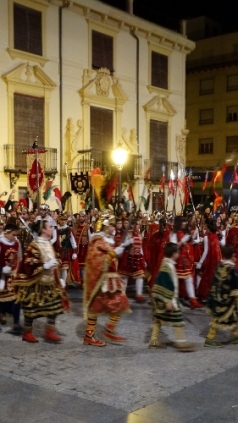 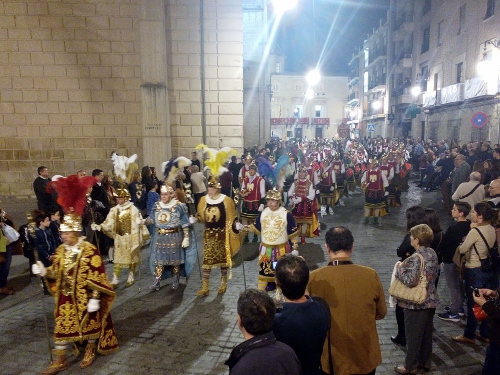 After each procession, they marched back tot heir headquarters at Plaza Marquis del Rafal (near the tourist office) where they performed their El Caracol or snail, a circular march which gets narrower, accompanied by the sound of drums and trumphets. I was able to witness this spectacle after the procession on Good Friday (Hans was already tired and went back to the camper). It was also then that the Brotherhood had a good fireworks to celebrate their 125 years jubilee.

After a short night, it was Easter Sunday. Hans and I went to the cathedral to attend the celebration of Holy Eucharist. However, it was an Easter Mass that we were expecting. It was a dry Eucharistic celebration, there was no choir, and the priest was just kind of narrating! There were few people in the cathedral, maybe around 60. The mass was finished in less than an hour.

Just as were were going out of the cathedral, a lively parade passed by with the two religious figures from the Encuentro. It was accompanied by the Tamborada, a big group of drummers composed mostly of children, beating their drums as good and as hard as they could. The religious images were brought back to the Museo. After that, we ended our Semana Santa adventure in Orihuela by having a good drink at a local café and spending a quiet relaxed afternoon  with our D’Traveller. 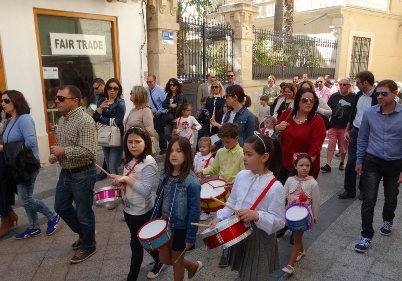 What an experience it was to both of us! Our Semana Santa in Orihuela has left us so many impressive, powerful and wonderful memories and impressions. It is surely one of the highlights of our camper adventure trip this year!