Located at the southernmost point of the Iberian Peninsula and with an area of only 6.8 sq. km, Gibraltar is a British territory situated in Spain. Through an attack of the joint forces of British and Dutch forces in 1704, Gibraltar became under the supervision   of the British Kingdom, which was later reaffirmed through the Treaty of Utrecht in 1713.

Gibraltar may just be a small area, but it is considerably full with buildings which are built very close with each other, the roads are busy with vehicular traffic, and the Main street is alive with its cozy bars, shops and wandering people. The Rock, which has become the symbol of British courage and determination, towers dominantly in the landscape of Gibraltar. It has an imposing and mighty appearance that has always fascinated us. And the temptation to climb the Rock has always been on our mind. At last, this time around, we have finally succumbed to that temptation, and we have won! Armed with our  backpack full with drinks and food, we went to Gibraltar one not so Sunny day (Feb. 12, 2016) and conquered The Rock!

Leaving our campsite to hike the Rock

Mini-guide for the hike 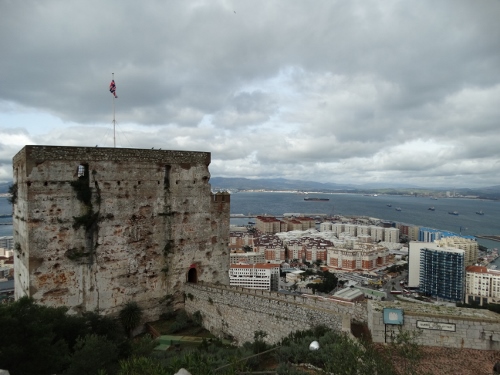 View of the Gibraltar bay

2.  From Great Seige, we followed the asphalted road in going up to the top of the Cable car station. The road was again steep, and was unpopular to hikers (they used mostly the Queen’s road, going to St. Michael’s cave). The station was not operating at this time of the year because of annual maintenance. The view from this point is again magnificent. The Mediterranean Sea and the town of la Linea is in full glory to be seen! It was also here that we had our first encounter with the Barbary Macaques, the tail-less monkeys which inhabit the Upper Rock. They were slim creatures, moving too swiftly and trying to snatch away  whatever they could from unsuspecting tourists! 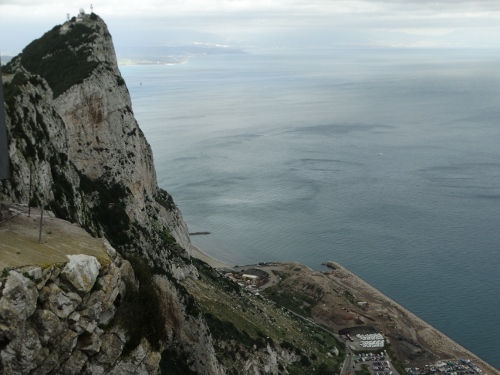 The Macaques trying to steal Hans’bag

3.  We then followed the same road in going down a bit, until we reached Douglas Lookout. It is a viewpoint very popular with tourists because of the many monkeys that are found here. Some of the monkeys are reasonably tame; you can even hold them for a picture or two.

4. Going on, we followed the way to O’Hara’s Battery. Named after Governor O’Hara, the batery is located att he highest point of the Rock, which is 426 meters above sea level. Found in this area is a 9.2″ gun. From here, we followed a narrow way, going up to the highest point. The views were really spectacular! We could see the eastern side of the cliff and the wide Mediterranean sea, and  we realized how high we were! From here, the hike became a bit easier as we just followed a reasonbaly good stoned-path in going down, all the time, having the magnificent view of the sea. Once in a while, we saw a couple of hikers, but for the rest, all was quiet. We began also to feel some drops of water on our faces, and the sky was becoming darker.. We had to hurry up! The Mediterranean Steps which we were following at this point, was one of the best paths of the hike. We passed by two small caves, until finally we reached a short tunnel (at the edge of the mountain, which reminded us of Calpe). At the other side of the tunnel was the end of the Mediterranean steps.

The East side of the Cliff 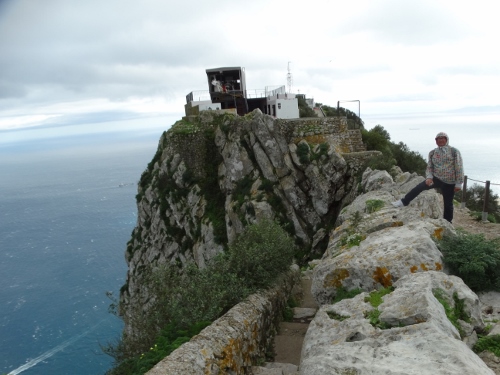 5. We hurried our steps, until we reached the Jew’s Gate where the famous Pillars of Hercules is also found. This Pillar of Hercules is believed to the site where Hercules performed one of his labors, and also the entrance  to Hades. It was a good place here because at this point, we had the views of Spain (Cádiz), the African continent (Morroco), and the two bodies of water, The Atlantic ocean and the Mediterranean Sea. It was just unfortunate that the sky was so dark, and it was beginning to rain.  We ended our hike here, and decided to walk down straight back to the town center, and not to go to St.Michael’s cave anymore. 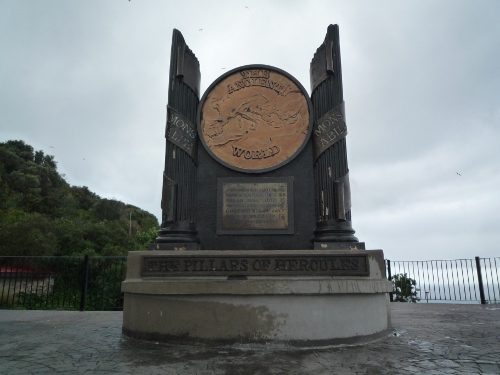 Pillars of Hercules, mythically believed to be the entrance to Hades 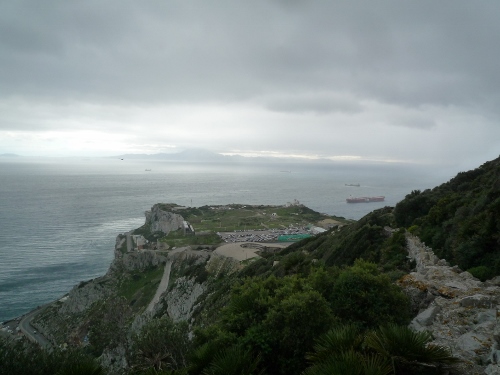 View of Europa Point on a cloudy afternoon

It took us a little more than five hours to do the hike. We have covered a lot of kilometers again, did some easy and difficult climbs. But the hike  was fun and safe. If you wish to see more of Gibraltra and not only its famous shopping Streets, go for a hike and see Gibraltar from a different angle. If you think you can not walk that long, you can make use of taxis or mini-vans who offers tour on the Rock for about 20 pounds per person. But then, hiking still gives you a more meaningful experience, I think. 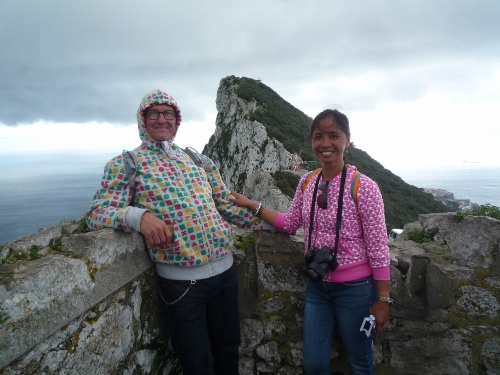 Our customary picture together, at Douglas Lookout