SAN SEBASTIAN IN ONE DAY

Situated in the Basque coast, San Sebastian boasts of having a mixture of modern and old city flanked by beautiful beaches with a special bonus of a charming island infront of it. Being the European Capital of Culture of 2016, the city offers a lot of activities and attractions which cater for all, tourists and locals alike. It has a lot of attractions, beautiful monuments, big shops, and three beautiful city beaches that a one day visit is not sufficient. Also a home for the famous pintxos, San Sebastian offers a wide choice of bars and restaurants which have made these little mouth teasers more than just a culinary treat!

The Ayuntamiento in San Sebastian

Being the only city which we haven’t visited in the Basque country, we thought it is about time to check this out.  But looking for a good parking for our D’Traveller was difficult in the city. There is one parking, a kind of park and ride beside the football stadium, but the surrounding was a bit desolate that we opted not to park there. We were able to come back and visit San Sebastian while we were in Zumaia. From Zumaia, we took the train which cost us 4.70 euro per person – retour. It took us 36 minutes to reach the city. That was a lot easier and cheaper than having to park our camper elsewhere in the city.

Walking from the train station, we followed the way to the tourist office. Having acquired some information (we bought a booklet for 1 euro), we began our discovery of the city. We started with a visit to the La Bretxa, the old town market, which is now converted into a modern shopping building. Opposite it is the traditional market, Merkatua, where we had our coffee. But having already seen the market in Bilbao, this one paled in comparison. Anyway, we walked on the old town’s long narrow streets until we came to San Vicente Church, a religious building from 16th century and the oldest in the city.

Walking further, we came to the spacious Constitucion Square or Plaza dela Constitucion. What is very noticeable in this square are the colourful facades of the houses with numbers painted on every balcony. This meant that this plaza was once a bullring. Walking in the direction of the water, we reached the Basilica of Santa Maria. It has an impressive portal. Sadly, we did not enter this building as we had to pay an entrance fee.

Bars are a -plenty 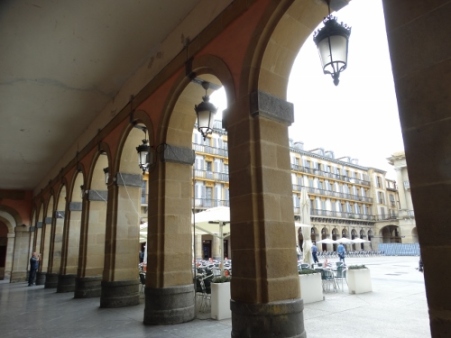 From the Basilica, we followed a narrow road which brought us to the port. From here, there was a path in going up to Mount Urgull. We took that path, and all the time we had an amazing view of the city of San Sebastian. We could see the famous La Concha Beach, the Ondarreta Beach and the Santa Clara island. Still walking up, we arrived at the Castillo de la Mota, a castle constructed in 12th century which played an important role in the city’s defence. Located in the castle is the San Telmo Museum which is free to be entered. It showcases the history of San Sebastian and also has contemporary exhibits. It was just unfortunate that the language is not translated in English! At the top of the castle is the not to be missed Sagrado Corazon chapel, with a giant statue of Jesus. From here there is a great panoramic view of the city, including its three beaches. Wonderful! It was wonderful and relaxing walking around the area of the castle and its surrounding park. We have spent quite a lot of our time here, just enjoying the views.

View of the city from Castillo dela Mota 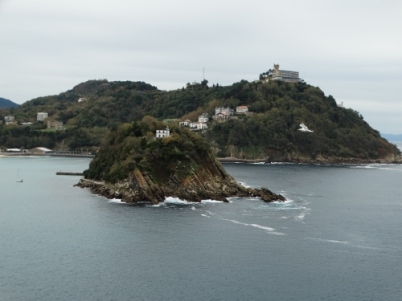 After spending more than half of our day in the old city, we explored the new part. San Sebastian has a lot of grand beautiful buildings. Among these are the Victoria Theater, Hotel de Ville, Congress Hall, and Casino Kursal. Our walk along the beautiful promenade gave us stunning views of the beaches and the island and all the modern buildings in the city. Our stroll along the busy streets brought us to some of the shops, designer and local alike. Our walk in the small narrow streets gave us an impression of what San Sebastian is; how the people here enjoy the things in life; how they take time to sit and relax in one of the uncountable cafes and bars and while the time away with a glass of wine or beer and a piece of pinxto.

Our visit to San Sebastian is just a short one. But just like what I always say, better a short visit than not at all. I know we have just barely scratched the surface; there are still a lot to discover, see and taste in this wonderful city. For the meantime, what we have experienced, no matter how little it is, will leave a distinct place in our palace of memories.

2 thoughts on “SAN SEBASTIAN IN ONE DAY”