ZUMAIA, A JEWEL OF A VILLAGE IN THE BASQUE COAST

If there is one village where we always love to come back to, then it is Zumaia, a small village off the coast of Cantabria. We came here for the first time last year, November 2015, not knowing what to expect, but we were totally awed! We were surprised by the simplicity of the village, the friendliness of the people, and the beauty of the surroundings. These same reasons have brought us back again in this village this year, the second leg of our round trip in Spain and Portugal.

Actually we came here a couple of days earlier than we have planned. From Hondarribia, we planned to visit San Sebastian. But we couldn’t find a decent parking area for our RV near the city; there was a kind of Park and Ride area about 3 kilometers from the center, but the area was a bit desolate. So we decided to drive through to the next village, Getaria. Arriving there, the road to the port is forbidden for RVs, and again,parking was the issue. Zumaia then was just about 6 kilometers further, so we drove there. Arriving in one of our favourite Spanish villages, we learned that there is a new parking area made for RVs. We followed the signboard, until we came to the parking by the harbour. It is more spacious, better and bigger than the last time (which was found in the industrial area). From the parking, we could see the village on the other side of the river, but to go there, we had to walk around, out of the shipyard/marina, cross the bridge and follow the footpath to the center. Biking could be best in this situation. We stayed here for 5 days, from November 2 to 6, 2015.

Our campsite at the marina (Elcano)

Services for the camper are present in the old parking area by Trenbidea street (just follow the signboard for camping).

Zumaia is a small charming village in the Basque Country which lies at the Vizcaya Gulf. It has an old center where streets are connected through narrow and steep stairs. Almost in every corner of the street, one can find small stores which sell basic needs. There are only 2 big supermarkets where people do their big shopping. At the center are a number of cafes and tavernas where the residents take time to sit, relax and mingle with each other. The village seems to come to life at around 8.30-9.00 in the morning, then parents walk their children to school, or grandparents take a stroll with their little grandchildren, either walking or pushing a stroller, a number of joggers run to the pier, and residents are up and about doing their things for the day. The children normally go to school using steps; others with bikes which crazy enough, do not have lights. The people don’t seem to hurry here. Even on market day, the vendors begin to put up their stalls at 9.00. It is busy from 9 to 13.00. Then quiet till 17.00. After 17.00, the streets are busy again as the children are being fetched from school. The parents, with the children, go first at cafes, have some drinks with friends, and go home at around 19.00. The boulevards are full with people strolling, young and old. Tavernas or bars begin to be full with regulars. Playgrounds are busy until 20.00. After that, people head to their houses to prepare for the evening. There hangs a very relaxed and friendly atmosphere in the air. Everyone seems to know everybody. A very typical Spanish village.

Map of Zumaia obtained from the tourist office 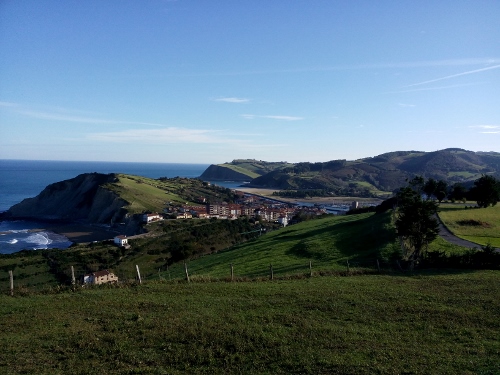 The village of Zumaia

The church, which looks like a strong fortress from afar is closed the whole day and opens only at 18.00 because a mass is celebrated daily at 19.00. Built around the old center are numerous buildings with flats, but what is really remarkable was, no building is the same! One is entirely different from the other. You can really see a variation in architecture. On our first time here in Zumaia, we explored every corner and street of this village, climbed every stairs and saw all the recommended tourist sites. Among these sites are : (1) Eglise de San Pedro, the village’s local church which was built around 1347, (2) Couvent de San Jose which was founded in 1609, (3) Ermitage de San Telmo which is dedicated to patron saint of the navigators, San Telmo and has a very spectacular location, standing on the edge of the cliffs that hang over Itzurun beach, and (4) Andre Mari of Arritokieta which is a hilltop sanctuary that overlooks the village and houses the carving of the Virgin, the village’s patron saint. Walking around the village bring you to all other monumental buildings found in the area. There is also the Algorri Interpretation Center which offers information over the Flysch formation in Zumaia. 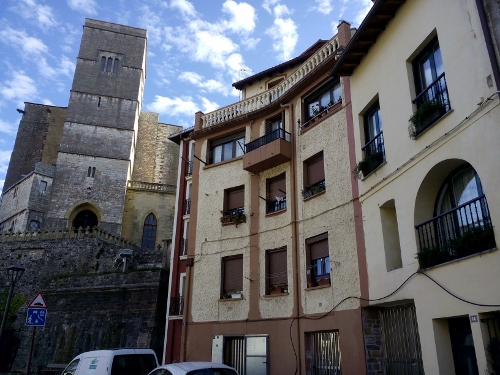 A VILLAGE FOR LOVERS OF NATURE

What really captured our hearts in Zumaia is its stunning natural beauty. Located between two rivers Urola and Narrondo and gifted with nice beaches Itzurun and Santiago, surrounded by mountains and most of all, home to the marvellous rock formations, the Flysch. During our stay here, we have walked up to Itzurun beach and saw one of the most wonderful creation of Mother Nature. It is just about 15 minutes walk from the center and yet it seemed so far remote already! Hans and I walked up there, and boy! It was a revelation! It was not only a nice beach, but what surrounds it is even more astonishing! It was enclosed in high cliffs, with stone sediments from different layers which tells millions of years of geological history. We just stood there, watching one surfer trying to ride the waves, and enjoying the beauty in front of us. Following the way to the panoramic view, we walked through small streets. We came upon a very old small church, The Sanctuary of Saint Telmo (Ermitage de San Telmo). This church stands on the edge of the cliffs that hang over Itzurun beach. It was closed but I was able to take a peep inside thru looking at one of the small holes on the wall. Walking away from the church and following the path to the panoramic view, I just couldn’t believe what I was seeing! So magnificent! So spectacular! I was short of words to describe it. Over the cliffs I have a grand view of the Flysch, the sedimentary formation of super imposed layers of rocks which were revealed through pounding of the waves over the years. This Flysch characterizes the entire coastline and is part of the Geopark. (More about it in my next write up). The waters in the ocean had the colors from green to aqua blue to deep blue! And the waves looked like they were violently kissing the rocks on the cliffs! I didn’t know how high the cliffs are, but they seemed too high because sometimes I felt dizzy and afraid to look down. But I tried to overcome that angst coz I didn’t want to miss any of the beauty around me at that time.

View of San Telmo and the way to Algorri

The Cliffs and the Itzurun beach

We also climbed up to the right side of the mountain, the Talaimendi hill, following a narrow dirt road which led to the old lookout point of the village. From there we had a nice view of the village and the harbour. We walked down via the other way and ended up near the lighthouse.

Our customary picture together, taken at Itzurun beach

We were lucky because it was good weather when we were here. In fact, the thermometer gave 32 degrees temperature, reason enough for us to put on our swimming suits and head to the beach on our last day here. We went to Itzurun beach and enjoyed a couple of hours swimming and sunbathing. The beach was a bit busy with other sun lovers and surfers at that time. And when darkness fell, Hans and I made a last long stroll and saw felt the evening life of the village again. With mixed emotions, we left Zumaia the next day. Adios, Zumaia, hasta la vista!