SAND IS NOT SANDY AT ALL

Sand is the administrative center of the municipality of Suldal in Norway. It is a pleasant village, with old well-kept white houses, a museum, a nice harbour where the ferry to Ropeid departs every 15 minutes, a few shops, a couple of hotels and restaurants. Coming from Nes, we followed R 13, took the ferry from Hjelmeland to Nesvik for 99 NOK, had a couple of hours detour at a small fishing village of Jelsa  15 kms off the road from R 13, where Hans luckily caught 3 big fishes, then drove back again to R 13 for another 30 kms after arriving finally in Sand at around 18.00. We camped by the parking of Lakse Studio or Salmon Studio in Sand, which seemed to be a famous overnight stop over for  RV owners, based from the numbers of RVs parked when we were there, noticeably all Germans.

The Failed Hike to Hosebrua/Sandsfossen

From where we parked, we had a good view of the Hosebrua. This is a bridge built to cross the other part of the River Suldaslagen. A few meters from it is the Lakse Studio, or Salmon Studio where one can see the salmon and trouts swimming upstream to the river. After having a good barbecue dinner and a good night sleep at the parking, we planned to do a short hike, as seen from the tourist folders. Because it was supposed to be short one, about 3 kms, we didn’t bring anything with us. The hike was a failure! We were not able to see the signs, with as a consequence that we went back to the camper.  We went to the nearby Salmon Studio with view of the Sandsfossen waterfalls. Again, this “supposed to be”waterfall was a disappointment. After having seen a number of really big and high waterfalls, this one paled in comparison! We walked further down to the village center, until we arrived at harbour where the ferry to Ropeid departs. Near the museum was a parking, where a couple of other RVs stood. We fetched D’Traveller and parked here for the next three days.

View of the small village of Sand

Colorful wooden houses along the Sandsfjorden

Hellandsnuten is the highest peak in the area of Sand, and with a height of 722 meters above sea level,  perhaps the best viewpoint of Suldal. From the top one can see the four fjords : the Sandsfjorden, Hylsfjorden, Saudafjorden and Vindafjorden. The hike is approximately 9.4 km in length which is to be done in approximately 4 hours. We received this hiking trip from the tourist office when we asked for one.

We were having bad weather in Sand, and we had to wait a couple of days before we could do the hike. As soon as the sky cleared up,  Hans and I were raring to go! Armed with drinks , light lunch, chocolates, extra jackets and of course cameras, we drove to the starting point, which is at the parking near a kindergarten in Eide, 2 kilometers from the center.  From the starting point, there were clear boards on where to go. The first kilometre was immediately steep, stony and difficult. It was like a warning of what was waiting for us! After a 20 minute hike, there was a tent in the middle of the pine forest, with a wooden box full of survival materials like blanket, knives, ropes, first aid kit and others. We continued the hike until we reached a tractor road that we had to cross. From then was the hike difficult. We had to walk on portruding stones, steep rocks, muddy swamps and wet areas. It continued for hours. What was remarkable was the path was very well signposted. We saw red painted marks everywhere and at short distances from each other : on the rocks, on the trees, even on recently axed trees. You could never get lost. 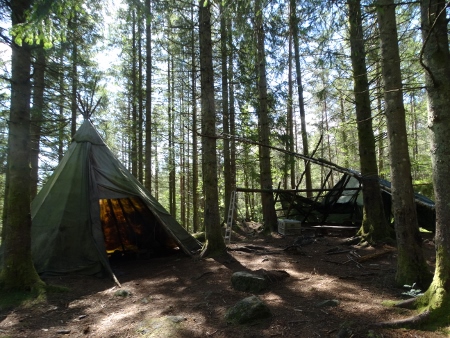 Survival tent on the way to Hellandsnutten 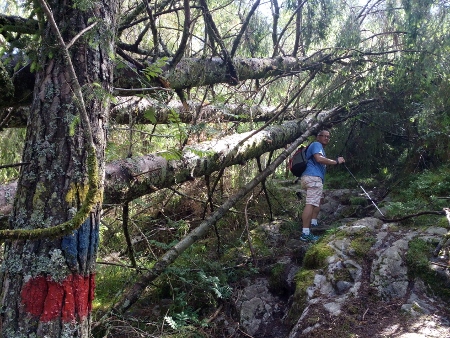 Just follow the red/blue painted marks along the trail.

Strenuous hike to the top.

The view is simple breathtaking!

After almost three hours of hiking, we finally arrived at HELLANDSNUTEN, the highest peak in Sand. There was a heap of stones piled on top which serves as a mark. The view from this point was really MARVELOUS! AMAZING! Imagine seeing fjords and mountains and lakes. It was sadly cloudy when we were there. It would have been more marvelous if  it was a clear day! Nevertheless, we enjoyed immensely having reached this summit! The difficulty with the hike was gone! We made a bold act of climbing on top of the cairn. It was a kick! I even made crazy poses there and filmed one of my songs again! Crazy! There was a notebook with pen in a kind of mailbox attached to the stones. Hans wrote our names there. The last entry before us was June 5, 18 days before we arrived.

Our customary picture at Hellandsnutten, with view of the four fjords.

GOING BACK TO SAND

We did not want to go back the same way, both feeling that we have been there, known the way, and we have now acquired the habit of pushing ourselves to the maximum. So we decided to hike up to Hellandsloten and complete the round trip tour. The first part was easy, gradually descending, that we thought it would be easier the rest of the hike back. But we were in for a surprise. Just when we thought we had the most difficult part of the hike in going up, it was worse in going down. We had to cross a number of small creeks along the way, stepping on stones not to get wet, sometimes making little jumps from one stone to another; we had to walk many times on wet areas that looked like swamps; we had to look very carefully for the marks as at this point they were so scarce and almost vanished; we had to cross snowy parts to get to the other area; we missed the marks two times, thinking that we were lost; and worst, we had to walk thru a long boring tractor road almost at the end of the hike. After about 4 hours of hiking back, we were so glad when we came to a familiar terrain again! So relieved! In no time, we reached the camper again, that on 19.00, after 8 hours on the way!

Crossing small creeks in going back..

We drove back to our campsite for the last two days by the harbour. It was full with campers. Luckily we found a small corner, but no internet connection. We had good dinner, nice warm shower, had some drinks and good night sleep. The following morning, Hans tried his luck  for fishing, but just like the last days, he had no luck. Our stay in this small village was memorable. Even though we had bad weather the first days, we finally made it up by doing what could be one of the most memorable hikes in our lives.

How about you, been in Sand before? What are your experiences?