CONQUERING THE HIGHEST PEAK IN JORPELAND

Jørpeland, also known as “The Ryfylke town”is the commercial center of Ryfylke in the region of Rogaland. It offers a number of shops and good transportation services to nearby towns such as Tau and Stavanger. It is also a good base for the hike to Preikestolen. The Ryfylke National Tourist Route Rv 13 passes this busy little town. The guest harbour has facilities for laundry, shower, camper parking and toilet. But because parking for camper by the harbour cost 150 NOK, we just looked for a quiet spot in the town to park. The first day, we parked at the parking of a small commercial area, near supermarket Rimi. And the second day, we parked at the back of the Tourist Information office. It was a better place because it had toilet and internet connection. 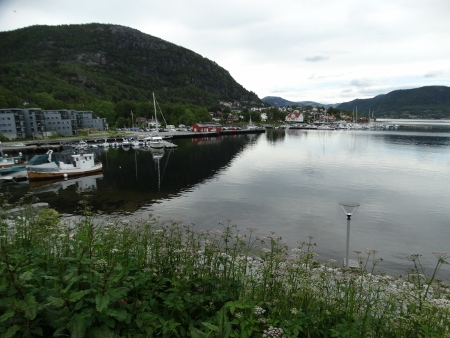 The small harbour of Jorpeland

With a height of 774 meters high above sea level, Heiahorn is the highest peak in the area of Jørpeland. We learned about this hike after inquiring from the Tourist office. We received no additional relevant information about it, only where to start the hike and that it would take us four hours to take the 7 km- round trip hike.  I asked for a map, but it was not needed according to the tourist employee.  We rested the rest of the day, not knowing that we would be needing it badly for the hike.

The next day, we drove to the parking area at Liarvatnet lake, following the instructions given to us by the grandma at the tourist office to drive at a certain road until we could not go any further.  We found ourselves driving at Dalavegen (Rv 527) and at one point the road stopped and we were at the lake. That was after 7 km drive from the center. It was a nice lake, across the bridge is a kind of campsite for scouting, Camp 733. But what strange was there were no signposts about hiking routes everywhere and we didn’t know where to begin. Luckily somebody came, we asked him and informed us the starting point, which was by the Camp 733.  We made a picture of the big map found at the campsite, which proved to be very helpful during our hike. 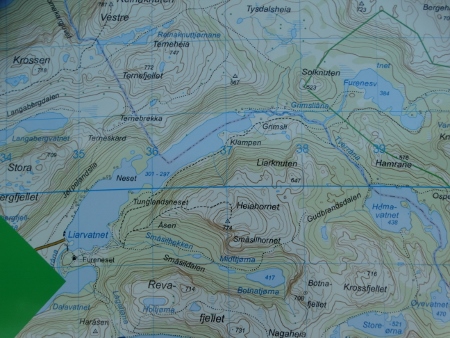 Map of the mountain

The hike took us 6 hours and 15 minutes to finish; we started at 11.30, after doing the laundry first, and returned at almost 18.00.  It was after a hike of 2.5 hour that we reached HEIAHORN. We were really very high, 774 m, that we saw the clouds just passing us by. It was kind of eerie being up there, with the fog and the clouds and only the mountains  around us! On top were heaps of stones piled up together and whoever made it to the top adds his/her own stone also. We did that also, plus a short musical recording. After staying on top for about half an hour, it was again time to go back. But because we did not want to take the same difficult way, we opted to follow more red-painted marks, hoping it would bring us to where we started and not to somewhere else. It did, but that was after 4 hours more of hiking, following the signs to Liarknuten, then to Grimsli. 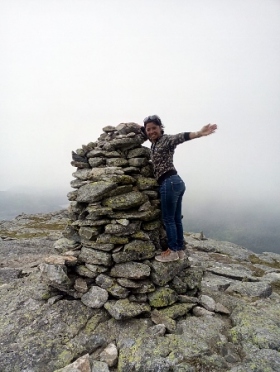 Arriving on top of Heiahorn! 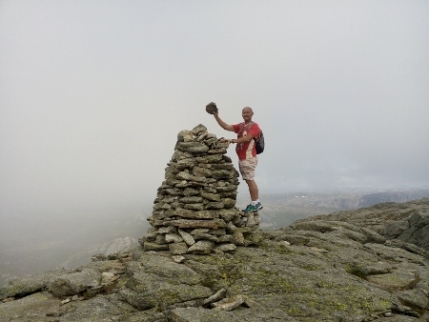 Hans, putting his share of the stone on top.

WHAT MADE HEIAHORN A DIFFICULT HIKE

1.  There were no clear signposts along the hike;  our only guides were the red painted marks/stones along the way which at some points totally disappeared!

2.  We really had no idea where we were; we were quite unprepared, not knowing what to expect and where the trail would end. When we thought we have already reached a very high plateau or peak, then we still saw a much higher peak and more red-painted marks that we had to go on!

On the way to the top, with only red-painted stones as guide

With the view of the Liarvatnet

3. There were no flat surfaces  along the hike; we had to walk, jump a little, crawl, find our balance often, use our hands and feet, and catch our breath!

4. We had to rely on our own instinct and common sense. It was really a good thing that we made a picture of the map of the area at the beginning of the hike. We consulted it every now and then especially when we faced an area where we had to choose among arrow-routes! We never saw any human being also during this 6 hour hike! We were totally alone, in the middle of the forest! It was in a way, dangerous and exciting. We were already talking about the possibility of maybe spending the night in the forest if we didn’t find the way back. Luckily we did not have to! 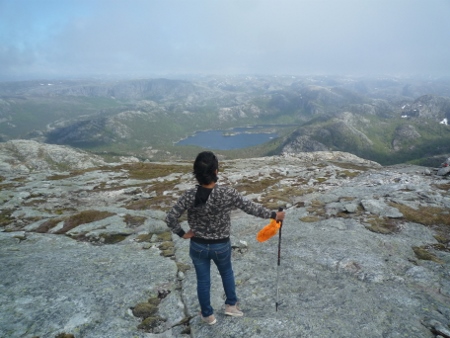 Taking time out to enjoy the view

We were very tired when we came back, that we had a very good night sleep after that. We had muscle pains the next day we woke up. We drove back to the center, went to the Tourist office and told the employee there that we had a good but difficult hike! This hike prepared us for more challenging hikes ahead of us. Hans would like to do the hike one more time, if he comes in the area again!